[OPINION] The detours I took to become a nurse Facebook Twitter Copy URL
Copied
I realized that sometimes, you just have to go beyond the borders of your personal plans and let the world take you for a ride with its far-reaching wings 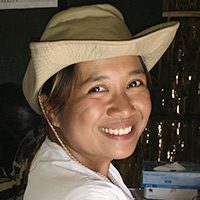 When I was young, I’ve always asked my mom for medical toy sets. I had kidney basins and forceps of various colors and sizes, and a couple of stethoscopes. During playtime, my friends and I would pretend that we were in a hospital – making up physical complaints that I need to check and cure. I wanted to become a doctor. Or so I thought.

I took up nursing in college seeing it as the most direct route to medicine. But I took a detour along the way. It started when I first donned my nurse’s cap and uniform halfway through nursing school. I looked at myself in the mirror and felt that I was exactly where I wanted. (READ: Long shifts, low pay are part of a PH nurse’s reality)

Then there was the profound joy I felt spending 4 to 6 hours in the hospital with our patients. I felt fulfilled checking and getting vital signs, and in making sure the patients took their prescribed medication.

The original plan was a seamless transition to medical school once I become a registered nurse, but I thought of trying nursing for a year. My first assignments were in the operating theater (OT) and delivery room (DR), assisting surgeons with instruments during operations, and working with midwives in monitoring women in labour. It was stressful but exciting at the same time. So when my self-imposed one year limit was about to end, I decided to extend.

I went to the Middle East. That time, all the nurses I knew were heading there so off I went, setting aside my medical school plans once more. I worked in a surgical department in Libya. My knowledge and skills were challenged, but I took those as learning opportunities to professionally grow. (READ: Why our nurses are leaving)

What I loved in the surgical department was the interaction with patients – something that was limited in the OT and DR because patients there are usually sedated. The kisses and endless “thank you” from patients were motivating. I was likewise fortunate to work with dedicated colleagues who had treated me like family.

Then, the 2011 uprising happened. I wanted to stay but the situation caused my mom tremendous worry. I went home to relieve my family’s worries. I returned to Libya a few months later and stayed there until 2013.

Nurse in a shirt and cargo pants

I left the Middle East to pursue an opportunity in Canada. I really wasn’t keen on it, but again, everybody wanted to be there so I decided to explore.

As I was waiting for my visa, Super Typhoon Yolanda (Haiyan) ravaged the Visayas region. I immediately browsed the internet for organizations who are needing volunteers then I came across an announcement from Doctors Without Borders/Medecins Sans Frontieres (MSF). I took my chances because I wanted to see myself as a nurse in a shirt and cargo pants.

Then it hit me. This is why I did not pursue medicine. I really wanted to become a nurse. This is who I am.

I got a call from MSF a week later and I was ecstatic. My family, on the other hand, was horrified. The idea brought back memories of their anxiousness while I was in Libya. It was a difficult decision but I had to put my family first.

I went to Canada to study French and take up bridging courses for nursing. These are requisites to obtain a permit to work as a nurse there. To finance my studies, I worked in nursing homes and took jobs as private help nurse.

For once, everybody had peace of mind except for me. Suddenly, I was not the person I envisioned myself to be. Don’t get me wrong. I sincerely cared for my patients in Canada and I appreciated their daily gratitude.

But I was restless. I was at a crossroads. I opened up my dilemma to my favorite patient, an 86-year-old Jewish woman who always had something wise to say. She told me, “If you have a dream, don’t hesitate to make a step towards its achievement.”

After 9 months of traversing a relatively smooth road, I took a U-turn and joined MSF in 2015.

Since then, I’ve been sent to the Democratic Republic of Congo, Central African Republic, and South Sudan. I was out in the bushes working, teaching, mentoring, and inspiring others to see beyond the nurse’s cap and scrub suits. I found contentment, and I’m still learning a lot.

I realized that sometimes, you just have to go beyond the borders of your personal plans and let the world take you for a ride with its far-reaching wings. I am now where I want to be, and I have always been. – Rappler.com

Ji Nacanaynay works as field human resources officer for Doctors Without Borders/Medecins Sans Frontieres – Hong Kong. She is responsible for the welfare of nurses like her, and others who save lives even under the most challenging settings.