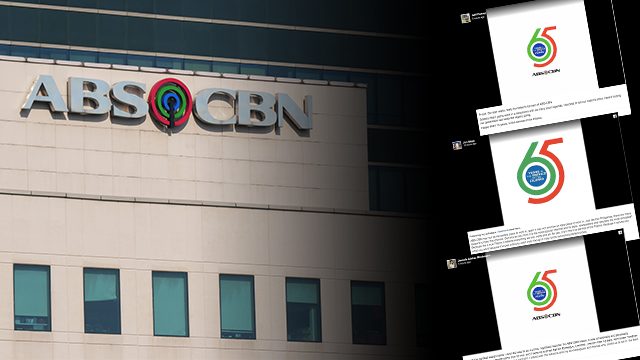 Facebook Twitter Copy URL
Copied
Remembering their journey as part of the media network, members of the ABS-CBN family post the company's 65th anniversary logo on their social media pages, along with their tribute to the company

MANILA, Philippines – After the online exchange of Angel Locsin and Jimmy Bondoc revived concerns over the possible non-renewal of their company’s franchise, ABS-CBN journalists and staff took to social media to pay tribute and show support for the media network which marked its 65th anniversary this year.

Remembering their journey as part of the media network, members of the ABS-CBN family posted the company’s 65th anniversary logo on their social media pages, along with their tribute to the company.

In 2017, Duterte threatened to block the renewal of ABS-CBN’s franchise, which will expire in 2020. He had accused the media network of “swindling” and of biased reporting.

Experts had said that  the President’s warning to ABS-CBN was a threat to press freedom.  (READ: Duterte’s ace against ABS-CBN, the Philippines’ biggest network)

House Bill No. 4349, which seeks to renew the franchise granted to ABS-CBN for another 25 years, remained at the House committee level.

On Friday,  ABS-CBN journalists and staff reiterated that the country’s biggest network would always be “in the service of the Filipino people.”

Others pointed out how the media network provided opportunities to realize the dreams of countless Filipinos.

Forrmer ABS-CBN journalists and staff jumped in the conversation to share their experience working in the media network, and stood in  solidarity with their former colleagues.

“Bumagyo, lumindol, umulan man ng bala, kahit saan nandyan ang ABS-CBN News (If there’s a storm, an earthquake, a rain of bullets, no matter where it is, ABS-CBN News is there). Proud to have been part of it. I stand with the network and my ex-colleagues and friends who continue to toil in the field,” said Al Jazeera’s Jam Alindogan, a former ABS-CBN reporter.

The posts were made a day after ABS-CBN actress came to the defense of the media network after Jimmy Bondoc, who is serving the Duterte administration as Philippine Amusement and Gaming Corporation vice president for corporate social responsibility, said he was “eagerly awaiting [the demise]” of ABS-CBN.

In a series of tweets, Angel Locsin criticized Bondoc’s insensitive remark, pointing out that thousands of jobs were at stake. – Rappler.com