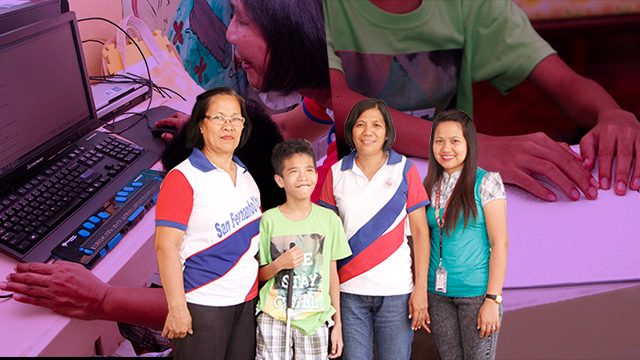 Facebook Twitter Copy URL
Copied
'The work isn’t easy, but the rewards for doing a good job, of making a difference in a child’s life are beyond measure,' says Remy Bruno, a teacher at San Fernando City Special Education Integrated School

LA UNION, Philippines – When a student completes a school year, a teacher’s work is fulfilled. But for some, the chances to make a difference in a child’s life doesn’t end there.

Some would go above and beyond to ensure all learners – including people with disabilities – have an equal opportunity to participate and learn together in an environment where their differences are valued and nurtured.

In La Union, there’s a school focused on doing exactly that.

The journey may be a tough one, but for teachers like Remy, the deep love and empathy for children with special needs would ease the path for an inclusive education.

The road to inclusivity

Thirteen-year-old Justine Rivera was visually impaired at birth. His mother had health issues while she was pregnant, and died shortly after giving birth.

Losing his mother at a young age, Justine ended up living with his grandparents in La Union, away from his father and older siblings.

Although he grew up in a happy home, his grandmother Emelita Rivera often worried about his future because of his disability. She hoped that the right knowledge and tools would help him succeed and be more independent.

When he turned 6, his grandmother enrolled him at the San Fernando City SPED Integrated School. It was in that class where Remy met Justine.

In the Philippines, the Department of Education has recorded around 350,000 enrollees in its SPED program for elementary and high school. However, since not all public schools are offering the program, some students have to travel to distant towns to be able to access special education services.

Even though she came from a family of teachers, Remy was initially reluctant to be one. But teaching was second nature to her. She taught in a private school for a few years before joining the Department of Education in 2011. After 8 years of teaching general education, she was offered to teach SPED, handling children with visual impairment.

Working with learners with educational needs can be challenging, and is vastly different from what Remy used to do. What kept her devoted to teaching was her deep love and empathy for her students. (READ: Rowena Garcia: The singing, storytelling science teacher)

“When I met Justine, he had very limited skills. He was even scared to walk and move around in the beginning,” she said.

Over time, Remy taught Justine the basics like an orientation on mobility and how to count using the abacus. Their classes later progressed to learning how to read in braille, a reading and writing system for the visually impaired that uses a series of raised dots to correspond to the letters of the alphabet. Blind persons read the clusters of dots called “cells” by touch using their fingertips to form words and sentences.

They practiced braille reading using old egg cartons to simulate the dots. Remy teaches reading the same way she would a sighted learner, beginning with letter sounds or phonics.

She was later amazed after witnessing how quickly Justine learned to read.

“I saw great potential in him. He was so active and always eager to learn,” she said. (READ: A long way to go for special education)

Beyond a teacher’s work

The two bonded instantly, but tragedy struck a second time when Justine’s father passed away when he was 11 years old. Orphaned and under the care of his ailing grandparents, he began missing school.

Concerned, Remy reached out to his family and offered to take him in during school days. With their arrangement, Justine gets to stay with Remy’s family in the city during weekdays to make sure that he can attend his classes. On weekends, Justine goes home to spend time with his relatives. For two years, Remy worked closely with Justine, guiding him every step of the way. Through hard work, he made significant strides in the program until the school decided it was time for him to be integrated into regular class.

To ease him through the inclusion process, extra measures were put in place to ensure that his learning needs were being met as he gradually adjusted to his new class.

In 2016, after completing a training with local non-profit organization Resources for the Blind, Remy began translating and printing local reading materials in braille.

After each class, Remy would borrow Justine’s reading materials from his teacher and convert them into braille.

Remy hopes to inspire others to get into teaching and help children with special needs.

“The work isn’t easy, but the rewards for doing a good job, of making a difference in a child’s life are beyond measure,” she said.

Remy is committed to supporting Justine and all her other students until she retires from teaching.

“I may be the teacher but I also learn a lot from my students. What they taught me about patience and resilience, you wouldn’t learn it in any book or school. I believe that with the right support, these kids are capable of doing great things,” she said. “What makes Justine special is not his disability but his determination to learn and rise above his circumstances. My dream for him is to finish college. Maybe he can take up special education so he can teach visually impaired learners how to read,” she added.

As for Justine, he is now a confident and independent Grade 5 student. He can walk around the campus all on his own and has made a lot of friends. He loves reading and mathematics. He also learned how to use a computer. His dream is to finish college and work with computers.

“I know I wouldn’t have been able to do well in school without the support of my family and teachers,” he said.

“Study hard and always ask questions so you can do well in school. Never let your disability stop you from achieving your dreams,” he advised. – Rappler.com

Kaye Sucgang writes and tells stories for a living. She is passionate about children’s education, sustainable living and wildlife conservation.