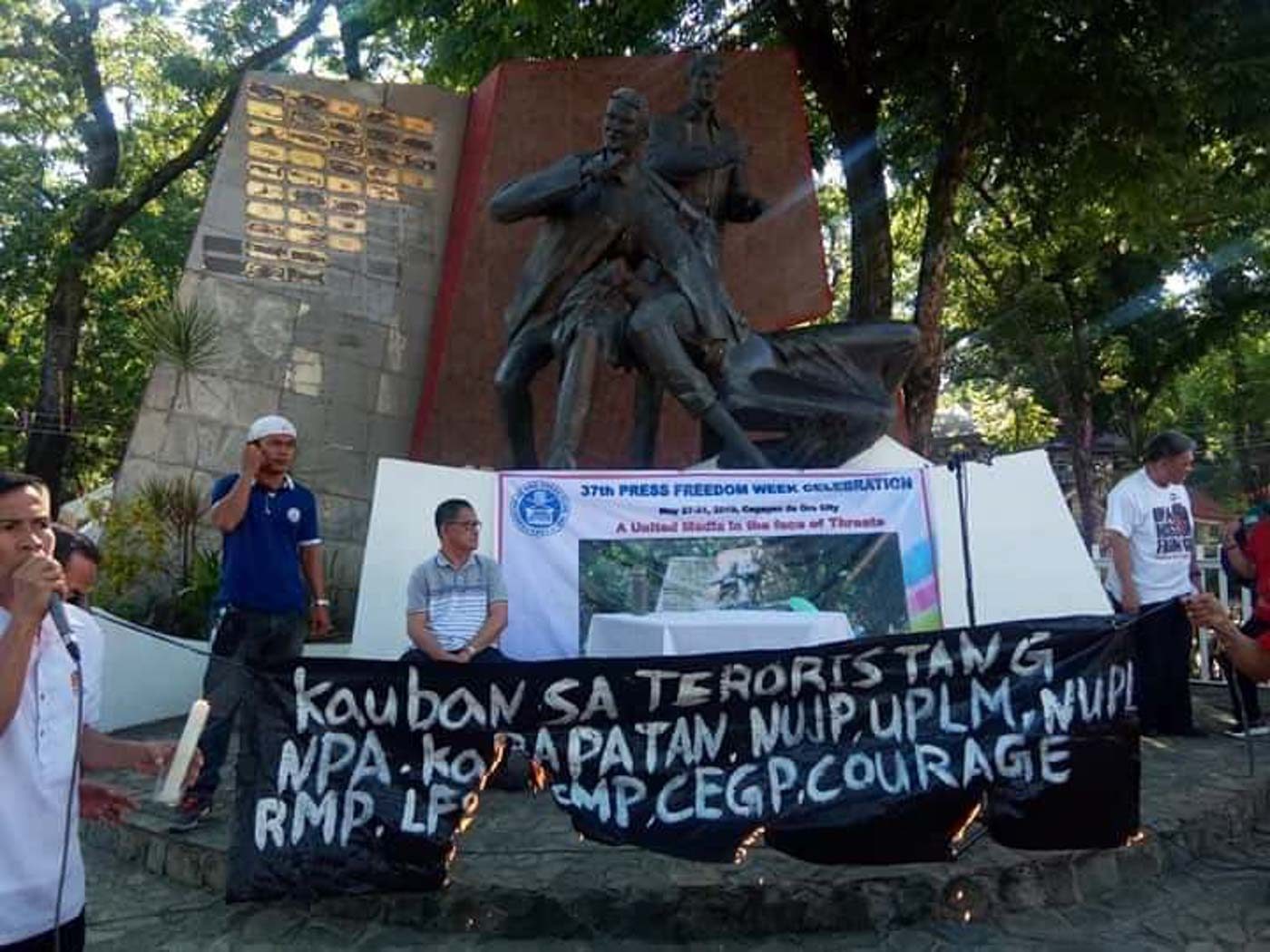 ZAMBOANGA DEL NORTE, Philippines – The National Union of Journalists of the Philippines (NUJP) lauded their colleagues in Cagayan de Oro City for standing against allegations that they and other groups are communist fronts.

On Monday, May 27, a black streamer red-tagging the NUJP and other organizations was draped on the fence of Cagayan de Oro’s Press Freedom Monument at Vicente de Lara Park. The incident happened on the first day of the city’s Press Freedom Week.

In response, members of various media organizations took turns in tearing and setting the streamer alight while vowing to remain united and undeterred by the claims thrown against them.

The NUJP described the response of its local chapter “as swift as it was appropriate.”

“The example set by the media of Cagayan de Oro is proof of what we have maintained all along, that the united community of independent Filipino journalists is capable of holding back the darkness that seeks to engulf us once again,” the NUJP said in a statement on Tuesday, May 28.

It added that the timing of the incident indicated it was intended to suppress freedom of the press, and to “warn all journalists to go easy on critical reportage and commentary.”

Local NUJP chairperson Pamela Jay Orias slammed the red-tagging incident, saying “a critical press serves the public interest and should therefore not be subjected to attacks.”

Warning to all journalists

This is not the first time that journalists and human rights defenders in Northern Mindanao have been linked to communist rebels.

Despite these attacks on the press, CEGP national president Daryl Angelo Baybado asserted that journalists will continue to report what needs to be reported.

“We’ve had enough of the attacks launched by the government against the press. As vanguards of truth…we’ll need to vow to become more true to our commitment of serving our purpose – to fight tyranny and to let people know the truth,” he said.

Since President Rodrigo Duterte took office, journalists and human rights groups have decried attacks against press freedom which have escalated in the Philippines.

Amid the threats, the Philippines slid one spot in the 2019 World Press Freedom Index, ranking 134th out of 180 countries. – Rappler.com

Maria Victoria Te is a Rappler mover in Cagayan de Oro City. She is a Grade 12 student of Xavier University-Ateneo de Cagayan and editor-in-chief of The Squire Publication.