‘How hard is it to be seen as human?’ 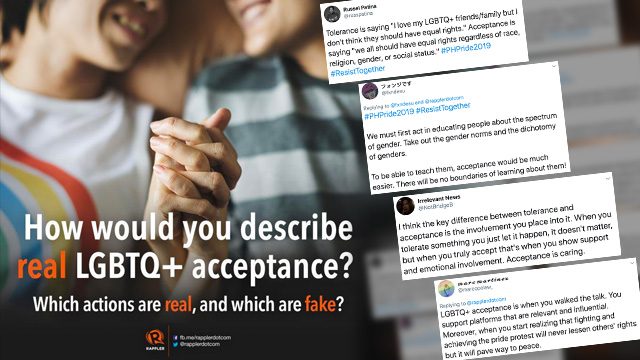 MANILA, Philippines – The LGBTQ+ community’s fight for acceptance is a continuing struggle.

To treat people as equals is to recognize that they are persons who deserve the same rights just as anyone else.

Twitter user CJ Dominguiano says it begins with perceiving LGBTQ+ members as equals. This was echoed by Alyssa Alvarez, who said acceptance begins when we see one another as human beings.

Tolerance ends and acceptance begins only when an individual truly and fully recognizes that a member of the LGBTQ+ community is his/her equal—a human being who deserves the same rights, the same compassion, the same everything. #PHPride2019 #ResistTogether https://t.co/f6LniUU7D0

Acceptance, IMO, is when we begin to truly see one another as human beings. Despite our differences, every one of us is a living, breathing person with hopes, dreams.

UPLB Babaylan, the main LGBT organization of the University of the Philippines-Los Baños, and individuals Toby and Roentgen tweeted about true acceptance coming hand in hand with with rights.

Acceptance isn't just allowing us to live, it is allowing us to live a life worth living. Acceptance comes with respect and appreciation, and that means that LGBTQ+ rights are defended not to fill a quota, but because LGBTQ+ lives are truly valued. #PHPride2019 #ResistTogether

Real acceptance is when no one is questioned for not acting the way society taught us how we should act, no one is ridiculed, disowned by their families, or worse, murdered for being LGBT, and no one is deprived of their rights because of their SOGIE. #PHPride2019 #ResistTogether

Other netizens took things further by differentiating “tolerance” and “acceptance”. Russel Patina stressed that tolerance actually denies the LGBTQ+ community of their rights.

For Twitter user @fxndesu, acceptance is easier when people are educated.

We must first act in educating people about the spectrum of gender. Take out the gender norms and the dichotomy of genders.

To be able to teach them, acceptance would be much easier. There will be no boundaries of learning about them!

Marc Martinez highlighted how acceptance must also entail action, or “walking the talk.”

LGBTQ+ acceptance is when you walked the talk. You support platforms that are relevant and influential. Moreover, when you start realizing that fighting and achieving the pride protest will never lessen others’ rights but it will pave way to peace.

I think that's why acceptance is incredibly important to the LGBTQ+ Youth, it's a part of their identity that they're just beginning to figure out and to feel the support of the people around them could be what helps the process be a lot less scary

Members of the LGBTQ+ community have been struggling to fit into a society where institutions are biased towards heteronormative policies and cultures. (READ: [Dash of SAS] Tolerance isn’t acceptance, charity isn’t governance)

To this day, many LGBTQ+ Filipinos still experience discrimination in various forms. Even a measure such as the Anti-discrimination Bill was debated over for 3 years only to go back to square one when the Congress failed to pass it. (READ: ‘Tolerated, but not accepted’: Filipino LGBTQ+ speak up vs discrimination)

If we are truly accepted, there shouldn't be excruciatingly long talks about same-sex marriage and Anti-Discrimination Bill. Portrayal of the community in mainstream media should also be correct and not romanticized, and not be reduced to comedy. #PHPride2019 #ResistTogether! https://t.co/R5zqOGRYap

Below are highlights from the conversation:

How do you think can we strive for real acceptance for the LGBTQ+ community? – Rappler.com