Rappler Talk: What it takes for the LGBTQ+ to #ResistTogether 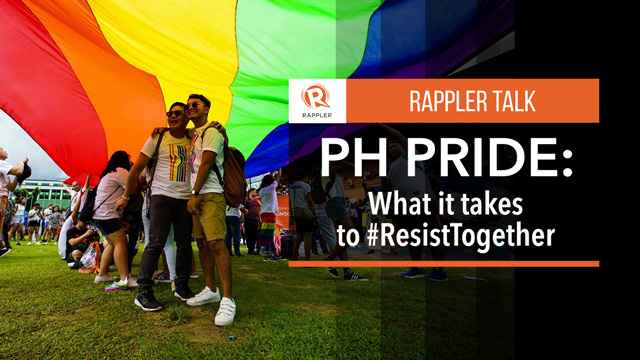 MANILA. Philippines – How can the Philippine society help eliminate discrimination and hate crimes against the LGBTQ+ community? (READ: ‘Tolerated, but not accepted’: Filipino LGBTQ+ speak up vs discrimination)

The Philippines has been ranked as one of the most gay-friendly countries in the world, making it to the 10th spot out of 39 countries. At least 73% of Filipinos believe that homosexuality should be accepted by society, according to the Pew Research Center.

For so long, the LGBTQ+ in the Philippines has lobbied for the enactment of the Anti-discrimination Bill. The legislation can be traced back to 1995 when Quezon City Representative Rey Calalay filed a bill proposing to recognize the “third sex” as a sector. Since then, different legislators have followed suit. Two decades later, however, a national law protecting the LGBTQ+ remains elusive. (READ: [OPINION] Life without bullies? Why Senate must pass anti-discrimination bill)

In partnership with Metro Manila Pride, Rainbow Rights Philippines, and ASEAN SOGIE Caucus, Rappler will be hosting ‘What it takes to #ResistTogether’ and advancing the LGBTQ+ agenda in the Philippines on Friday, June 21.