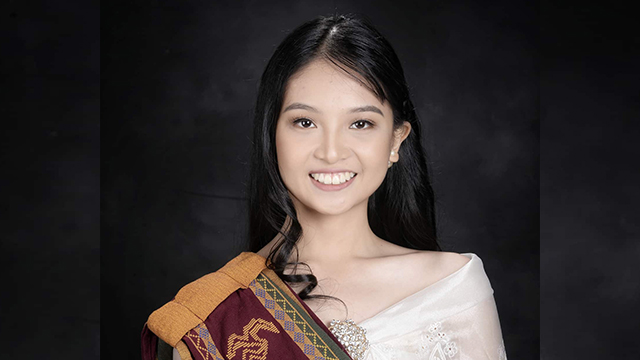 With a cumulative weighted average of 1.1971, the 22-year-old food technology major obtained the highest score on record in UP Mindanao since it was established in 1995.

Speaking to fellow graduates and parents at their 22nd commencement exercises on Friday, June 21, Estudillo recalled the promise of being an Iskolar ng Bayan (state scholar).

(There’s an Oble in each of us, willing to offer one’s self for a life of service…. With every sablay comes an interwoven narrative…that reminds us of a never-ending process of learning. As we leave this university, hopefully we still bring with us the lessons that we picked up in and out of the classroom.)

“Oble” is the the UP Oblation, the iconic symbol of the UP, which represents selfless sacrifce. (READ: FAST FACTS: The A to Z of the University of the Philippines)

Estudillo stressed that her achievement is a testament that students in Mindanao can reach greater heights. Born and raised in Toril, Davao City, she hopes that her story will help empower, especially those from the provinces, to tap into their potential.

“There were tales of how some students before almost got the award. I think having a summa in UP Min proves that Mindanao has a lot to offer, that we can also achieve. We’re far from the capital, so sometimes students have to go to other campuses to pursue their studies. UP Min’s achievements show that given equal opportunities, Mindanao is a home for excellence,” she told Rappler.

“There will be more summas to come. I may be first but I am not the last. I am only the first of the many,” she stressed.

Estudillo has gone a long way since the start of her UP journey. Before she became a state scholar, she was uncertain that she would pass the UP College Admissions Test (UPCAT), which she called the “hardest exam in the Philippines.”

“After the test, I felt I needed to take another examination in another school,” she told Rappler. “I really didn’t think I would pass. But because I did, I knew I was meant to be placed in UP Min.”

Out of the many course choices offered at UP, food technology stood out the most to Estudillo.

(This is where I learned to value things that we often take for granted. These are everyday things that you don’t notice until they’re gone…just like food that goes through many complex processes before it’s digested in your stomach. Food can mean life or death. That’s how important food technology is.)

“I am here by grace. I am not the brightest kid. I just loved to learn, so summa wasn’t a goal. Before fourth year, people were teasing me that I could be summa,” she said.

Throughout her stay in the university, Estudillo strived to excel in both academics and in extracurricular activities.

In her senior year, Estudillo studied courses in food Science and technology as an exchange student under the Trans-ASEAN Global Agenda Education (TAG)-AIMS program at the University of Tsukuba in Japan from October 2017 to February 2018.

She was also involved in various civic and religious organizations, both as a member and officer in Rotaract Club of UP Min, UP Min Koro Kantahanay, PSALM Ministry of UP Min, For the Unity and Solidarity of Every Student in UP (FUSE UP), and Let’s Do It Philippines Youth-Davao.

Estudillo added that the friends she met in her organizations, especially campus ministry PSALM, also helped her in her her UP journey.

“One important thing is the friends you make in the university. They’re the ones who encourage you and tell you frankly where you [were] wrong…. More than shaping my mind, UP shaped my heart. UP was a fertile place to bloom in God’s love and grace,” she told Rappler.

She attributed her success to her single mother, who worked as an overseas Filipino worker for a time to help her family. (READ: Son of junk collector graduates from UPLB, dedicates achievement to parents)

(I was blessed to grow up in a home that witnessed the strength and resourcefulness of a woman, of a single mother – a model of resilience that I’ll emulate as a fellow woman.)

After graduation, Estudillo will present her study to the Department of Science and Technology-Food and Nutrition Research Institute (DOST-FNRI) in July. Her thesis, Antioxidant and Anticancer Potential of Artocarpus Fruit Wastes, focuses on the possible ways to reduce fruit waste generated every year by converting its peels, seeds, and cores into food.

She hoped to get a job that would allow her to be immersed in understanding wider food systems and applying the theories she learned in college.

Estudillo shared that success is better defined as finding joy in what you do,  than the number of medals and achievements that decorate your life. (READ: UPLB graduate wants to help farmers like his grandfather)

Estudillo said she found her joy in service, especially to God and the people.

(UP didn’t teach us to to climb the top of the corporate ladder. It taught us to see and empathize with those at the bottom. Success is not measured by the thickness of your wallet; it’s in one’s wholeheartedness to help others. This is honor and excellence. This is true success.) – Rappler.com