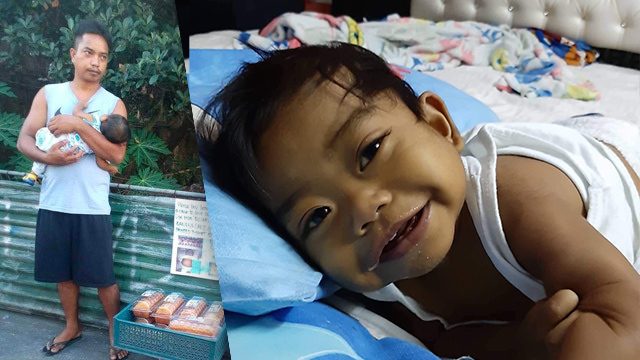 Detablan’s one-year-old son was diagnosed last November 2018 with biliary atresia, a rare infantile disease of the liver and bile ducts.

Two months after the photo went viral, they were able to get more than enough donations to fund Baby Aki’s medical operation.

Aside from numerous donations from generous people online, the family is thankful for the aid given by President Rodrigo Duterte, Senator-elect Bong Go, Senator Nancy Binay, an anonymous benefactor, and broadcast journalist Jessica Soho.

Received donations have been used for the operation package, air fare, transportation, lodging, and other supplies.

The family has been in India since May 20, where Baby Aki is confined at a private room in Apollo Hospital for his liver transplant.

Despite having arrived in May, Baby Aki has yet to be cleared by laboratory tests to undergo the operation.

Jabee Detablan, Baby Aki’s mother, will be donating her liver for her son.

However, the Human Leukocyte Antigen (HLA) testing used to determine the compatibility of an organ transfer showed a mismatch between Jabee as the transplant donor and her son as the recepient.

Because of this, Baby Aki is currently taking medication via Intravenous (IV) therapy to be cleared for transplant.

(There is a mismatch between me and Aki according to the HLA testing done which needs to be cleared first to avoid rejection post-transplant and for Aki’s body to accept my liver with a 100% success rate.)

Before leaving for India, Jabee recounted how they expected her husband to be the transplant donor. But things turned out differently.

(Before we left the Philippines, we had completed the laboratory tests, ultrasound, and injections needed and I was confident already because the doctor said that he was good to go but after two days in India, we figured out he couldn’t be Aki’s transplant donor because his liver had too many microveins, which deemed the potential transplant risky for Aki’s body.)

Despite the challenges, Aki’s parents remain hopeful that their son’s health will eventually get better.

From selling bags, perfumes, shell curtains to their famous banana cakes, there’s nothing that the Detablan family won’t do for their son.

(Of course, we love him so much that we would do anything to cure him. We’ll do whatever it takes, as long as he’s safe. I will always remind him to be humble to everyone we meet… and most of all, I would remind him to serve Lord God when he grows up.)

The family is thankful for the help and support that they have received from generous donors.

Moreover, Baby Aki’s parents continue to seek help for their son’s post-transplant requirements, such as his medication and weekly check-ups.

Those who wish to help the family may donate any amount to Aquirro Jazz Detablan, BDO Savings Account No. 005910516001. – Rappler.com