Jul 1, 2019 11:07 PM PHT
Bonz Magsambol
Facebook Twitter Copy URL
Copied
'We hope you extend your understanding of the situation, in keeping with the safety and security of everyone,' the Metro Manila Pride says in a statement 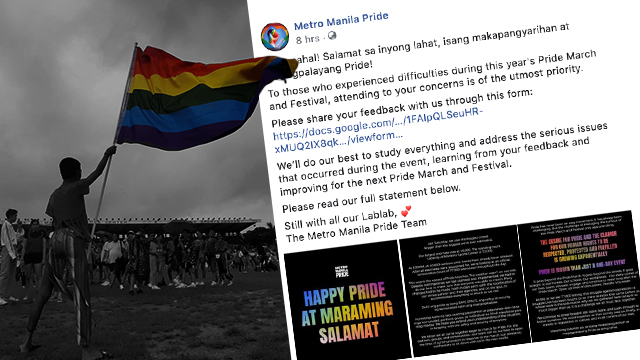 MANILA, Philippines – After drawing flak from some members of the lesbian, gay, bisexual, transexual, and queer (LGBTQ+) community, Metro Manila Pride issued a statement on Monday, July 1, apologizing for those who were not able to enter the Marikina Sports Center for Pride March 2019.

In a statement posted on Facebook, Metro Manila Pride said: “Humihingi kami ng taos pusong paumanhin at pag-unawa – lalo na sa mga komunidad, partners, grupo, at inbidwal na hindi makalabas para mag-martsa. (We ask for your forgiveness and understanding – especially the communities, partners, groups, and individuals who were not able to march.) We hope you extend your understanding of the situation, in keeping with the safety and security of everyone.”

Frustrated members of the LGBTQ+ community criticized Metro Manila Pride for its “unpreparedness” and failure to accommodate others who waited for hours outside the gate of Marikina Sports Center. (READ: IN PHOTOS: #ResistTogether at 2019 Metro Manila Pride March)

At 12 noon Saturday, June 29, there were already long queues at the entrance of the venue. Thousands were still waiting outside even after the gate opened at 2 pm.

“Dahil ang Pride ay isang safe space, ang safety at security ng komunidad natin ang mangingibabaw (Because Pride is a safe space, the safety and security of our community is the top priority),” the statement on Monday read.

“This wasn’t the easiest of Pride Marches. The weather wasn’t on our side. Despite contingencies we had planned, we had to do our best to make sure that everyone was able to march. Many changes had to be made, both in days prior, with the coordination of our venue partner and agencies, and on the spot, to accommodate everything as much as we can,” it added.

Metro Manila Pride also said in its statement that “Pride is bigger than just a one-day event.” It encouraged every member of the LGBTQ+ community to fight oppression and equality.

“As big as we are 77,00-strong, this struggle against oppression – a struggle that has been fought by so many activists that came before us, whose work is the sole reason why we are gathered here today – is so much bigger than us. It is a challenge we all must face, together,” it added. (READ: Beyond Pride march, advocates urge LGBTQ+ community to #ResistTogether)

For so long, the LGBTQ+ community in the Philippines has lobbied for the enactment of an anti-discrimination bill. The legislation can be traced back to 1995 when congressman Rey Calalay filed a bill proposing to recognize the “third sex” as a sector.

Since then, various lawmakers have followed suit. Two decades later, however, a national law protecting the LGBTQ+ remains elusive. (READ: [OPINION] Life without bullies? Why Senate must pass anti-discrimination bill)

Senator Risa Hontiveros, a known champion of the community, also joined the thousands of members and allies of the LGBTQ+ community at the Pride event.

Hontiveros said she would map out the composition of the 18th Congress – both the Senate and the House of Representatives – to determine who would support her in pushing for the sexual orientation and gender identity and expression (SOGIE) equality bill. (READ: ‘Rainbow wave coming’: Hontiveros hopeful SOGIE bill will pass 18th Congress)

Established in 1994, Metro Manila Pride has provided avenues for allies and members of the LGBTQ+ community to celebrate their identities while staging protests on social issues.

Despite the rain, organizers said there were around 70,000 attendees on Saturday, maintaining the event’s record as the oldest and largest Pride demonstration in Southeast Asia. This was almost thrice its number of participants in 2018. – Rappler.com