What LGBT kids need to hear 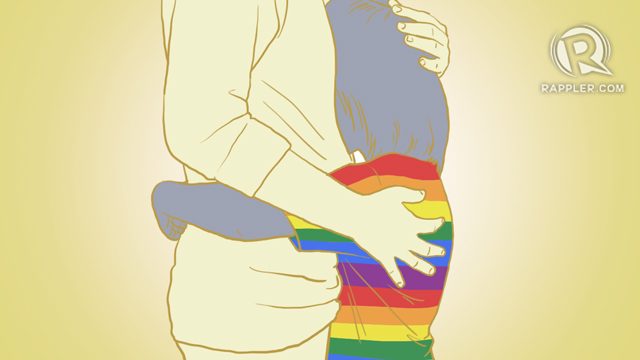 Facebook Twitter Copy URL
Copied
This is for the thousands of children who were taught that they are nothing but abominations, for the kids who are disowned by their parents, for the students kicked out of schools, for young people harassed in the streets “Act like a man.” That was the motto of my high school. Growing up, I was surrounded by boys who were always eager to prove their masculinity. Some ended up in fights, others in sports, others in parties, but almost all seemed to loathe one thing: Being gay. I studied in a school where being labeled a faggot was an attack on your masculinity, where coming out to your barkada meant possibly losing your best friend.

I was forced to go through this every single year, with a religion teacher that read us the same bible verse that said homosexuals were an abomination. I had to sit through teachers telling me that I was an abomination, that my love was a sin, that my feelings were a phase.

In my Grade 9 class, our religion teacher went as far as saying that being gay or lesbian is a mental disorder. My teachers never told me God hated me. In fact, they were very clear God loved all sinners. But I was still a sin that I couldn’t change. They never needed to tell me he did because, after all, he must. Regardless, I’m an abomination. I’m mentally-disordered.

I studied in a school where being anything but straight made you afraid of whether or not you were going to be allowed to stay. I heard the story of a girl in our sister school who had to transfer because she was caught making out with another girl on campus, stories of students who got kicked out because people found out they were gay. Some of them weren’t true. A lot of them were. But to us it didn’t matter because the only thing we knew to be true was that we were afraid.

But not all hope is lost.

In 2018, I joined the Philippine Anti-Discrimination Alliance (PANTAY), a nationwide network of young LGBT advocates fighting against discrimination. We continue to fight for the SOGIE equality bill, a proposed law that would criminalize all forms of discrimination against people on the basis of their sexual orientation, gender identity, and gender expression. It would protect students like myself from being kicked out of school because they were gay, prevent parents from forcing their children to go through conversion therapy, and bigots from spreading hate through textbooks.

While many say the Philippines is one of the most LGBT-friendly countries in the world, I feel that it just isn’t. Fighting for this bill is one of the hardest things I’ve had to do. Whenever I go online, all I see are people calling young LGBT people disordered, against the will of God, and part of the destruction of the moral fabric Philippine society; sometimes I feel like I’m back in that school.

The SOGIE equality law will seek to end discrimination on the basis of SOGIE in the public sector, public spaces, the workplace, in schools, and in the household. If this gets passed, people wouldn’t be able to try to force us through conversion therapy because we’re gay, beat us because we like dresses more than pants, or kick us out of school for our sexual orientations, gender identities, and gender expression.

When this gets passed, the message comes loudly and clearly from a state policy: that LGBT kids like me need to be protected, and that discrimination in all forms is inherently wrong. We must build a society where people like me don’t have to be afraid of who they are.

This is for the thousands of children who were taught that they are nothing but abominations, for the kids who are disowned by their parents, for the students kicked out of schools, for young people harassed in the streets.

Things need to change. And that change should start with a SOGIE equality law that recognizes equal rights for LGBT persons like me, a law that tells me, “No, you are not disordered nor an abomination”.

Jake is a second year AB Communication student from the Ateneo De Manila University. He is 18 years old.