Facebook Twitter Copy URL
Copied
The global climate strike urges everyone to join the youth in demanding climate justice, and put pressure on politicians and companies to set more effective measures to preserve the environment

Running until September 27, the global climate strike urges everyone to join the youth in demanding climate justice, and put pressure on politicians and companies to set more effective measures to preserve the environment.

While most groups plan to hold climate protests, others will hold forums and summits to raise awareness in their community and push for solutions.

Ateneo Environmental Science Society president Kitkat Poe pointed out that mainstreaming climate conversations through a strike is necessary to fight for and uplift communities vulnerable to climate change.

“In the context of Ateneo, it is no lie that we are in a more privileged position and so we need to use this position to fight for other sectors and to make our voices heard,” she said.

“[Ateneans] might be better off in coping with the effects of climate change, but it won’t be the same case for other vulnerable people. This is why we are not just fighting for ourselves, but for others, as well,” Poe added. 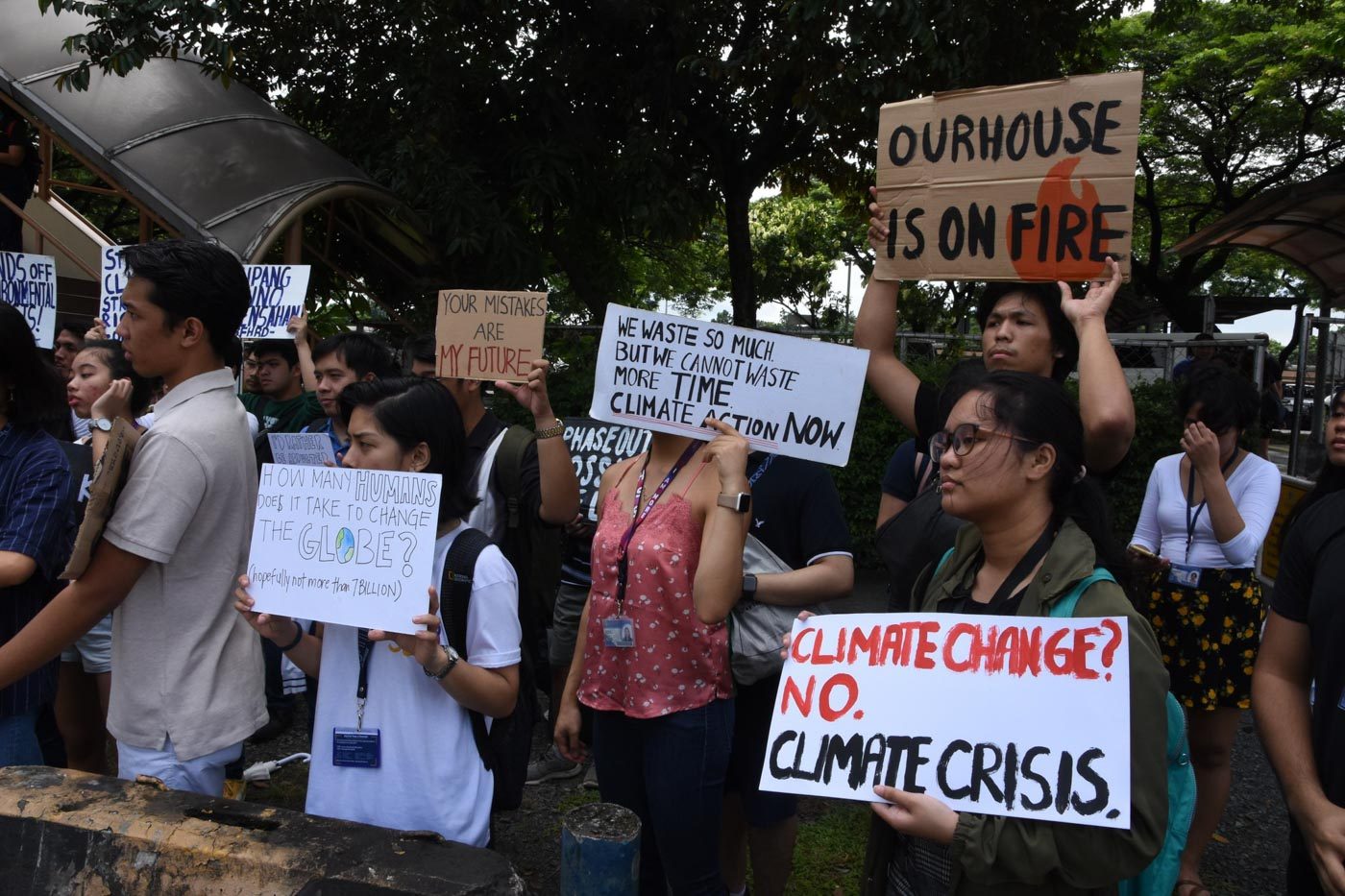 Experts have warned that there are only 11 years left to prevent irreversible damage from climate change.

This climate crisis might lead to catastrophic consequences such as fisheries degradation, coastal flooding, and extreme weather events, among others.

It might also push 120 million into poverty by 2030. (READ: [OPINION] The climate emergency challenge: It’s time)

“The strike for climate change is a strike for human rights,” Hen Ramos of One Big Fight for Human Rights and Democracy said.

Throughout the day, various mobilizations happened in Quezon City, Ilocos Norte, and in Iloilo, among others.

Ilocos Norte kicked off this year’s global climate strike by conducting a cleanup and strike. Students and faculty of Mariano Marcos State University College of Aquatic Sciences and Applied Technology managed to collect 247.5 kilos of trash, according to the Youth Strike for Climate Philippines. In Iloilo, the University of the Philippines (UP) Visayas saw its Oblation wearing a sash of trash, and its face covered. A strike also happened at the Plaza Libertad to call for climate justice from government and offices. 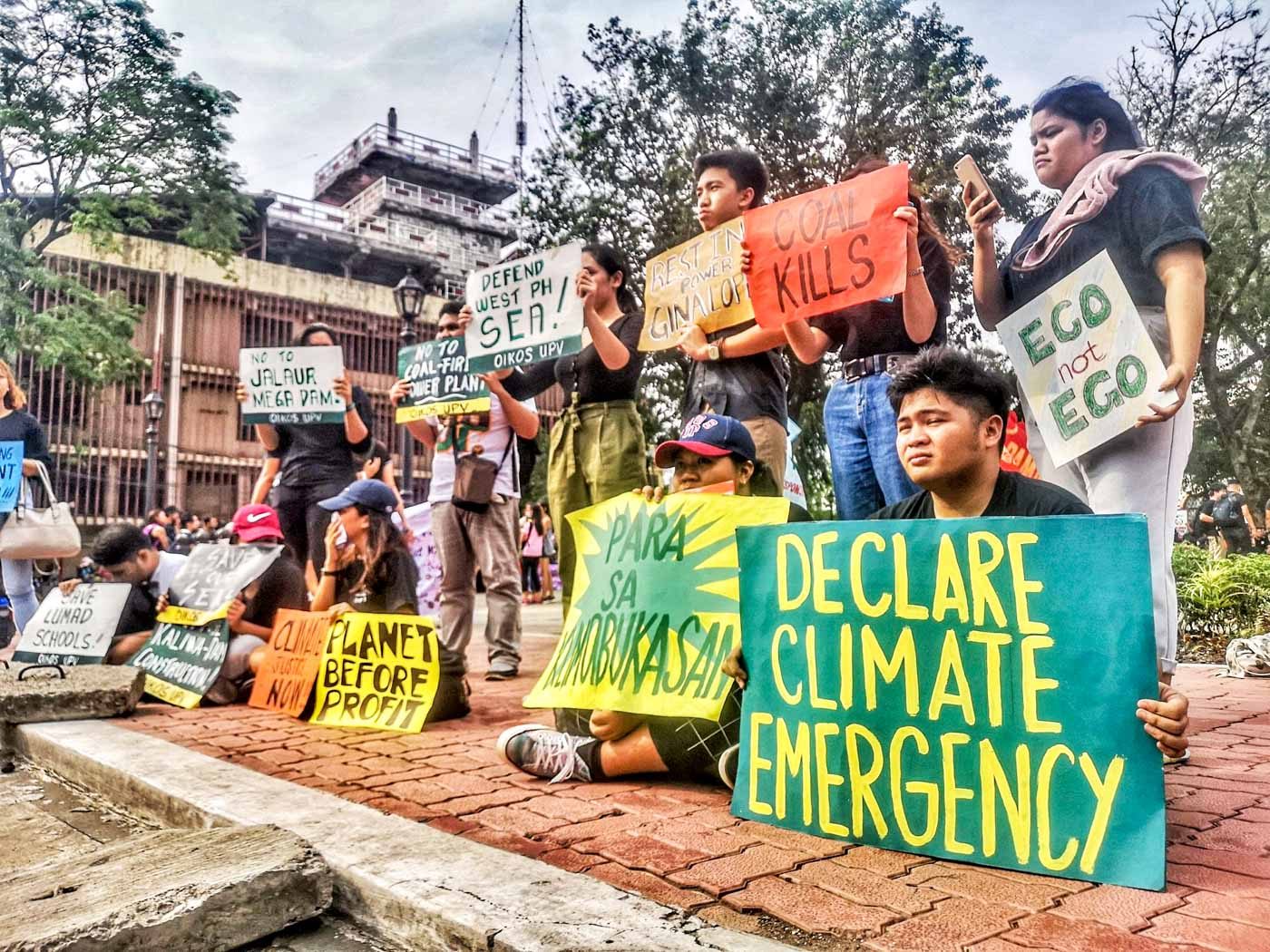 Meanwhile, UP Diliman made its mark by gathering individuals from various environmental organizations to hold a strike and form a human Earth. The Youth Strike for Climate Philippines said that one key demand unites the strikes conducted across at least 28 locations in the country: a call for the Phiippine government to declare a climate emergency.

The other demands include the immediate phaseout of coal and other fossil fuels and the transition to 100% renewable energy instead, as well as the enhancement of support for the creation of sustainable cities and communities.

Aside from the youth, environmental activists were also seen staging a rally outside the Department of Environment and Natural Resources to highlight the need to safeguard the rights of indigenous people and environmental defenders amid the climate crisis.

They also demanded justice for fallen environmental advocates such as Bienvinido “Toto” Veguilla Jr, a government forest ranger who was recently hacked to death while trying to arrest suspected illegal loggers in El Nido, Palawan. The Philippines ranked third – just behind India and Pakistan – among countries most vulnerable to climate change, according to a 2018 survey. It is also the most dangerous country to be an environmental activist, according to the report of international nongovernmental organization Global Witness.

The simultaneous movements hope to create a network of young environmental advocates and climate activists to “bolster collaboration and collective action for the cause.” – with reports from Carl Don Berwin and Dom Aumentado/Rappler.com