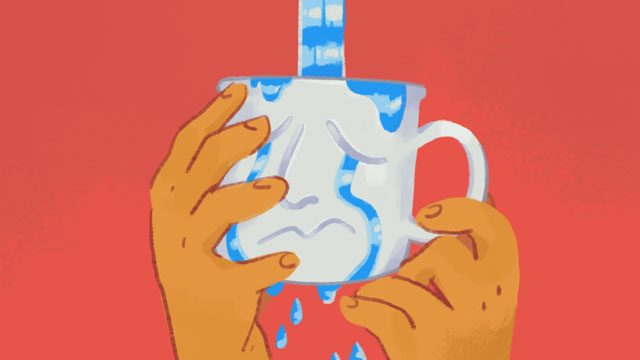 Facebook Twitter Copy URL
Copied
The hormones keep flooding into my brain long after the thing that made me sad or angry has gone. I can literally feel the hormones flooding in.

If you don’t have a mood disorder (clinical depression, bipolar disorder, etc) and would like to understand what it feels like, here’s how it feels to me. I hope you find this illustration useful.

Imagine that for every emotion, there’s a tap that pours hormones into your brain every time you feel that emotion. Something happens to you, the relevant tap opens, you feel that particular emotion for a while. Then the thing stops happening, the tap closes, the emotion drains away, and you go back to normal.

A mood disorder is like having faulty washers on one or more of those taps. If you are genetically predisposed, imagine those washers were faulty at manufacture. If not, perhaps they simply become faulty over time for no great reason. Either way, a faulty washer is not necessarily a problem if you don’t have to open and close that particular tap too often.

If you live a stress-free life, maybe you don’t need your angry tap a lot. But if you have a lot of stresses in your younger life, you will be opening and closing those taps much more, and slowly the washer will erode. In my case, I suspect I am genetically predisposed, and a number of faulty washers (sad, anxious, angry, and self-confident) were brought to a breaking point through a number of difficult periods in my life, particularly in my PhD fieldwork in West Africa (a lesson to all young researchers out there).

For me, whenever one of these taps is opened, it doesn’t close properly again. The hormones keep flooding into my brain long after the thing that made me sad or angry has gone. I can literally feel the hormones flooding in, and I know that on these occasions I will have to just excuse myself from the people around me and take myself away for a few hours until the excess hormones have drained away. Once they’re done, I’m back in action, sometimes as if nothing ever happened – it just takes me a lot longer than most people.

I think this is why it’s hard for people to understand depression and other conditions. The episodes are triggered by the same causes that trigger emotional responses in people without any disorders, but the hormonal reaction lasts for so much longer, it seems like the person is overreacting, when really they’re just struggling to close their taps.

Remember, mood disorders are just diseases affecting the hormonal and neural systems, just like the flu and other viruses are just diseases affecting the respiratory and immune systems. A person having a mood episode is not being weird or silly. They are not having personality problems. They are just functioning at a reduced capacity like anyone with a cold, or a migraine, or cramps, etc.

As long as you are mindful about not opening the wrong taps, I believe you should keep treating anyone with a mood disorder as if everything else about them is perfectly fine, just as you usually do with anyone with a more physical illness. – Rappler.com

Kerwin Datu, PhD, RAIA is an architect, geographer, and chair of the Sydney-based magazine Architecture Bulletin.