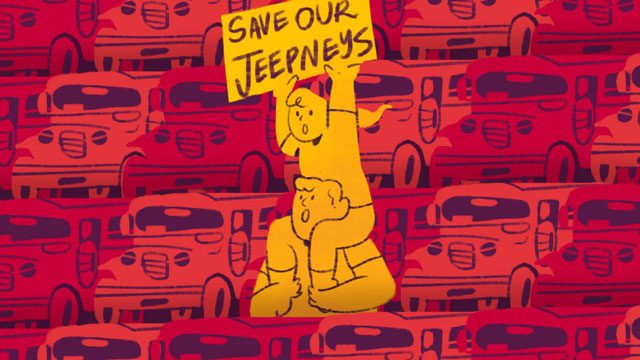 Facebook Twitter Copy URL
Copied
"We are all failed by the system. We can blame our drivers all we want, but these complaints are misguided. This oppression is not the fault of the masses." Even when I was young, my father has already been in the frontlines of jeepney strikes in our community. He has been a jeepney driver for 20 years. In all these years, we all know that strikes had always been a last resort.

Our jeepney drivers do not earn much. With worsening traffic and the consistent rising prices of goods, a day of striking has big repercussions. It could mean losing the house, or children taking delayed examinations, as our drivers confront overdue payments. Worse, it could even mean starving for an entire day.

Thus, our drivers prefer not to protest. Strikes are a manifestation of desperation, only done under extreme circumstances. The needs of our families have always outweighed everything else. Only when there is a threat to remove the capacity to provide these needs do our drivers fight back.

A nationwide jeepney strike symbolizes a national cry to be heard, desperation that resonates with every hungry family, with every set of parents fighting for a better future for their children. It symbolizes a national plea for help and a warning that when pushed to the ends, our drivers will not hesitate to resist. (READ: IN PHOTOS: Piston says nationwide transport strike a success)

Since our drivers responded with strikes, they have been a target of complaints. The issue has polarized the public. Many stand with our drivers in their urgent request towards more reasonable solutions. Others resort to blaming our drivers for the inconvenience.

None of the root causes of public complaints is our drivers’ fault. They are just victims like the rest of us, trying to survive in an economy run by the wealthy and the powerful. We are all failed by the system. We can blame our drivers all we want, but these complaints are misguided. This oppression is not the fault of the masses.

Our drivers see the urgency of being environmentally-compliant. They are willing to comply if only the cost were affordable. This is what they are asking. They are not petitioning that the commuters suffer from environmental hazards. In truth, our drivers have it worse. They are exposed at least 20 hours a day, often resulting in respiratory complications. They want to transition as much as the commuting public does, but they cannot afford it.

The government threatens to suspend licenses and franchises if our drivers fail to comply immediately. This is where the resistance comes from. The government wants to expedite the implementation of a poorly-consulted policy without consideration of the most affected sector. The government is not acting in the public interest. Which begs the question – whose interest are they acting for? (READ: Enchong Dee hits MMDA spokesperson Celine Pialogo over transport strike statement)

Recent media headlines have turned the public against each other. The commuters are not inconvenienced because our drivers decided to speak up. If only the government listens to its people, then a strike would not be necessary.

The root of the protest is simple: our drivers need a more reasonable plan for transition, a plan that will not remove their livelihood, a plan that can still feed their families. Can we blame these fathers if they wanted to make sure that their children will not go hungry?

I ask for your help. The recent strike was a desperate cry for help.

Our drivers need you in this fight. Stand with us. It is time our masses win. – Rappler.com

Reycel Hyacenth N. Bendana is a recent graduate and SY 2018-2019 Student Council President of the Ateneo de Manila University. She currently works with an organization that assists refugees, asylum seekers, migrant children, human trafficking victims, and people with disabilities mostly due to landmines, cluster munitions, and other weapons of war.