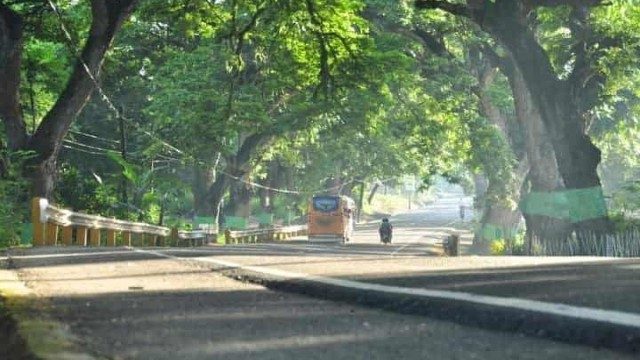 MANILA, Philippines – Cebuanos only have a few days left to stop the Department of Public Works and Highways (DPWH) from cutting down old roadside trees in two southern Cebu cities.

Separate petitions are being circulated online to save at least 32 trees in Carcar City and another 151 in Naga City.

The trees in Carcar City are scheduled for removal on October 15.

The petitioner to save the trees in Carcar City was posted by Milky Joy Pactores on petitiontime.com on October 9. It has gathered 6,239 signatures of the target 10,000 signatures as of posting time.

Another signature campaign was started on change.org on Thursday, October 10, by “Tingog Kinaiyahan” (voice of nature), this time, against the planned cutting of 151 trees in Naga City.

“The trees South of Cebu are part of our culture and heritage as a Cebuano aside from the environmental protection they give the inhabitants of the island,” the petition read. “Naga and Carcar will not be the same without those trees nor will the future of our children.”

The City Environment and Natural Resources Office (CENRO) granted the permit to cut trees to give way for the Metro Cebu Expressway project, a project under the Duterte administration’s flagship Build, Build, Build infrastructure program.

When completed, the 73-kilometer highway would connect the southern city to Danao City in the north.

On October 3, environmental lawyer Benjamin Cabrido Jr filed a petition asking the Court of Appeals (CA) in Cebu City  for a temporary restraining order to stop more trees from being cut. (READ: Environmental lawyer asks court for Writ of Kalikasan to stop tree cutting in Cebu)

Cabrido argued in his petition that the agencies did not follow proper protocol in issuing permits to cut down the centuries-old trees.

“Roadside trees are a special class of trees protected by a separate statute, Republic Act No. 3571. Due to the ongoing road widening projects in Cebu island and the entire archipelago, tree-cutting permits are issued by public respondent DENR through its Community Environment Resources Office,” Cabrido’s petition read.

The environmental lawyer explained the CENRO should not be the sole agency granting permits to cut trees.

“Before each roadside tree is removed, the law requires steps to be followed like [a] formal recommendation coming from LGU parks and wildlife committee and approval by a National Director of Parks and Wildlife, not the CENRO (City Environment and Natural Resources Office),” he said.

This is not the first time petitions have been launched to protect trees in these cities.

A signature campaign started by heritage advocate Balbino Guerrero in 2013 tried to stop the DPWH from cutting down hundreds of trees in Naga and Carcar, but failed, even if 7,000 people signed up for that campaign. (READ: Cebuanos oppose DPWH plan to cut century-old trees)

Several old trees have already been cut in Cebu City’s Barangay Capitol Site and in Carcar City in September. Meanwhile, the CA had yet to act on Cabrido’s petition to save the remaining trees.  – Rappler.com