MANILA, Philippines – Almost a week after Presidential Spokesperson Salvador Panelo commuted to his Malacañang office, a scooter driver took on the same challenge on Wednesday, October 16, to highlight poor road conditions in the metro.

Panelo dominated headlines on October 11 when he accepted the challenge posed by progressive groups to try commuting to experience the daily hardships faced by many Filipinos.

The Presidential spokesperson had especially been criticized after he denied there was a mass transport crisis in the Philippines amid disruptions in LRT2 operations and hellish traffic jams experienced daily in Metro Manila. He also suggested for commuters to wake up early in order to arrive at their destination on time.

Eager to prove a different point, 29-year-old Jaime Limpo rode an electric kick scooter (EKS) on the 16th, the day of his birthday, following the route from Panelo’s home in Concepcion, Marikina, to the Malacañang office. (READ: Manila moves: Cycling through the metro’s traffic)

Limpo said he thought of doing the challenge on his birthday to show the benefits of riding an EKS and highlight the lack of road infrastructure for bikers and scooters in Metro Manila. (READ: [OPINION] Metro Manila can be bike-friendly)

“Instead of receiving gifts or greetings, I wanted to give back to the community and show them the benefits of riding an EKS. I’ve read a lot of posts ranting about unproductive hours wasted in traffic and I hope that those people see what I’ve done and consider EKS as their means of getting around the city,” he said.

Logging an average of 650 km per month on his EKS, Limpo said that he’s been riding it to work, to errands, and even out-of-town trips since March 2018. He admitted that he’s fallen off his EKS a couple of times due to poor road conditions.

“Most common ones are deep potholes out of nowhere and asphalt roads with deep manholes. For bikers and EKS riders, these are actually life-threatening,” he added. 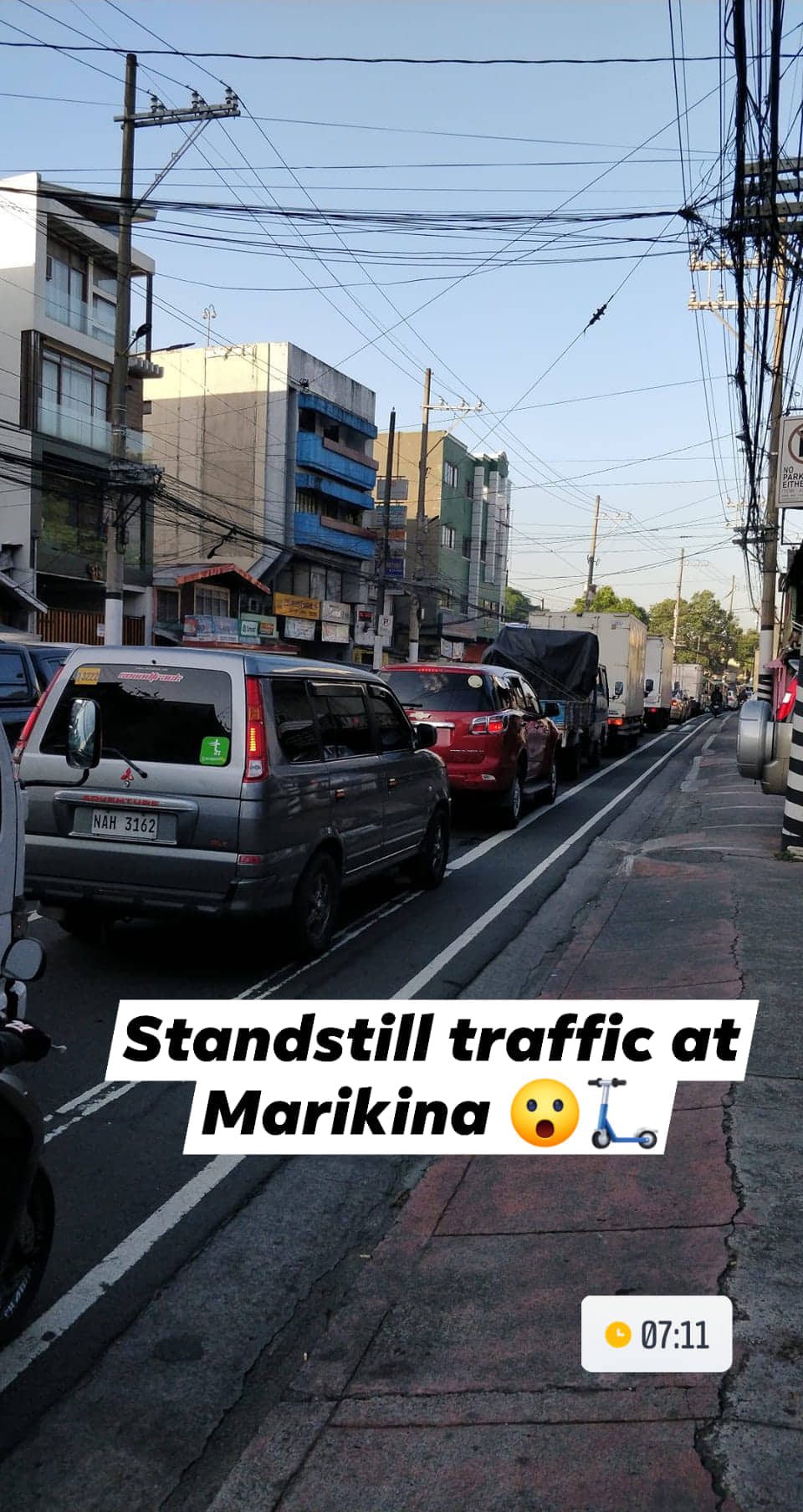 Panelo did not commute from his home in Marikina City, but from New Manila. He had slept at his child’s home the night before. From the main road between Gilmore and Balete Drive, he started his commute to Cubao at 5:15 am, then to Concepcion in Marikina, then back to Cubao, before heading to Sta Mesa.

It took Panelo nearly 4 hours to reach his Malacañang office after he arrived at 8:46 am or 46 minutes past 8 am, when government offices open.

Limpo planned to follow Panelo’s route, starting his journey at Concepcion, Marikina, at 6:52 am, where he saw commuters on the sidewalk waiting for jeepneys.

“What was frustrating about it is that most of the jeeps that would pass by are already full. There would be 1 in 10 that would be empty, and once that one stops, everyone will run towards it and race to get a seat. If this is the case, how can our PWDs (persons with disabilities) and senior citizens ride those jeeps? How can they race with able-bodied people?” he asked.

“The worst part of the whole situation is, once the commuters are aboard the jeep, their next enemy is the standstill traffic.”

Throughout his ride, Limpo noticed that while some cities had bike lanes, these weren’t protected. This means that some motorcycles and cars could swerve in and out of these lanes, which could threaten the lives of cyclists and riders like Limpo. (READ: What happens when you build protected bike lanes in cities?)

Since Limpo is an experienced EKS driver, he can already anticipate public utility vehicles swerving to the right to pick up passengers, and motorcycles cutting in and out of lanes Limpo arrived at the Malacañang office in one hour, at 7:53 am. He later shared his journey on Facebook groups “How’s your biyahe, bes” and “Electric Kick Scooter Philippines.”

Though the ride was easy for an experienced EKS driver like Limpo, he shared that he hopes the government would see the importance of implementing a lane exclusively for bikes and scooters, with enforcers ensuring that motorcycles or cars don’t use it. (READ: Philippines gets first protected bike lane along national highway)

“I also hope that the government will maintain our roads properly. Make sure they are even and paved properly,” he said.

“In most cases, since road widening is being prioritized, sidewalks are too small that only one person can pass. This is simply inhumane and unacceptable,” he said.

Limpo plans to do the route again while wearing a GoPro to further highlight the road conditions of the metro. – Rappler.com