Oct 19, 2019 7:09 PM PHT
Rappler.com
Facebook Twitter Copy URL
Copied
Departing from the usual, the cheer routine performed by the students from the University of the Philippines Visayas focuses on pressing national issues 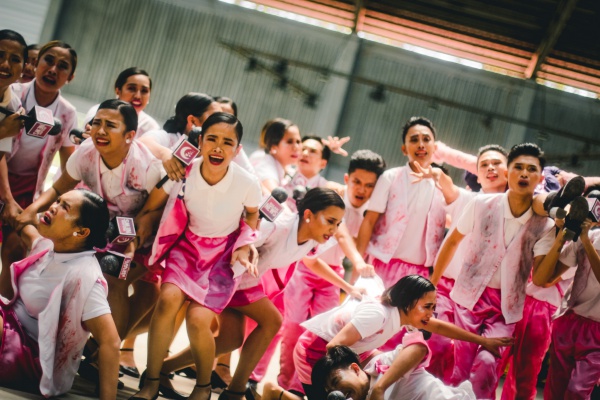 MANILA, Philippines – Taking their performance to a bigger platform, students from the University of the Philippines Visayas (UPV) in Miagao, Iloilo raised national issues in a cheering competition on Wednesday, October 16.

The cheer routine was performed by Skimmers, an academic organization composed of students from the Division of Humanities, College of Arts and Sciences.

The group’s performance bested 10 other academic organizations which joined the cheering competition as a kick off to the university’s annual sportsfest.

Departing from the usual, the cheer tackled national issues. The cheer criticized the Duterte administration and highlighted issues related to the West Philippine Sea and Rice Tariffication law affecting the Filipino workers among others. (READ: Timeline: Philippines-China Relationship Under Duterte)

The performance also pointed out the Supreme Court’s decision upholding as valid the Commission on Higher Education (CHED) memorandum order (CMO) removing Filipino and Panitikan, as well as the Philippine Constitution, from core subjects in college; the government’s determination to make the Reserved Officers Training Corps program mandatory for students and the militarization in campuses.

It also urged the Senate to push for the SOGIE (sexual orientation and gender identity and expression) equality bill and the divorce bill.

Towards the end of the performance, the cheerers put media oppression, repression and intimidation to the spotlight as journalists were repeteadly being killed, threatened and abused in the country. (READ: Over 100 attacks vs journalists since Duterte assumed office – monitor)

“As an annual event, we took this opportunity to finally highlight what we – the media and future media practitioners experience in the practice of the profession,” Jude Vincent Parcon, adviser of Skimmers and faculty member of the Division of Humanities in UPV said.

A clip of the video reposted on Twitter on Friday, October 18 went viral online gaining around 606,000 views as of writing. The clip was taken from the video uploaded on Youtube. – Rappler.com