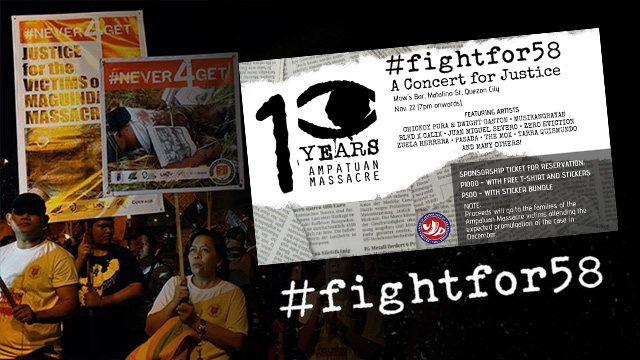 MANILA, Philippines – Commemorating the 10th anniversary of the Ampatuan Massacre on November 23, the National Union of Journalists of the Philippines (NUJP) along with its allies will be holding several activities to remember the victims and help the families of those slain.

Fifty-eight people – including 32 journalists – were shot and killed in the gruesome Ampatuan Massacre on November 23, 2009. They were on their way to the filing of the certificate of candidacy for Esmael “Toto” Mangudadatu. (READ: Children bear the brunt 10 years since Ampatuan massacre)

The infamous Ampatuan Massacre was dubbed by the Committee to Protect Journalists as the single most deadly assault on journalists in the world.

Ten years since it happened, families have yet to find a resolution of the case. A verdict is set to be handed down on or before December 20.

Here is a running list of activities commemorating the 10th anniversary of the Ampatuan Massacre:

#FightFor58: A concert for justice

Several artists will be coming together to perform at a fundraiser for the families of those who were slain in the Ampatuan Massacre 10 years ago.

Dubbed “#FightFor58: A concert for justice,” the event will help raise funds to allow the families of those who were slain to witness the promulgation of the case against the suspects.

NUJP chairperson Nonoy Espina said the event is also an “opportunity to renew friendships, unite and strengthen the bonds of the independent community of journalists at a time when the profession is under grievous threat.”

T-shirts, stickers, and other materials will be on sale for the fundraising. Sponsorship tickets are available for reservation – and cost P500 or P1000. Entrance tickets are pegged at P250.

For ticket reservations, sponsorship details, and other inquiries, contact organizers through 0917-515-5991 or visit the NUJP Facebook page.

Tribute in Bacolod City to victims of Ampatuan Massacre

Officers and members of the Negros Press Club (NPC) and the National Union of Journalists of the Philippines-Bacolod chapter will mark the death anniversary of those slain in the Ampatuan Massacre with a tribute at the NPC building on Friday, November 22, at 3 pm.

It will be followed by the lighting of candles and offering of prayers at the Marker for Fallen Journalists at the public plaza.

Kicking off the commemoration of the 10th anniversary of the Ampatuan Massacre on Saturday, November 23 at 5 am are the kapihan para sa hustisya and the journalists’ community mural painting for press freedom at the Mehan Garden, Manila.

This will be followed by a march to Mendiola at 10 am. The march will pause at exactly 11:23 am to pay respect to the 58 victims of the Ampatuan Massacre.

Wall-sized installations of the victims will also be set up in Mendiola. – Rappler.com