Facebook Twitter Copy URL
Copied
During this season of giving, several groups help provide shelter and other needs to affected communities of recent disasters as they slowly rebuild their lives

MANILA, Philippines – Hoping to spread the Christmas cheer during this season of giving, various groups reached out to victims of Typhoon Tisoy and the Mindanao earthquakes to offer tents and other needs for the holidays.

Throughout the past few months, several disasters struck the Philippines, displacing thousands of families and leaving a trail of destruction in a number of regions.

Several communities in parts of Southern Philippines, especially in Davao del Sur, struggled after portions of Mindanao were struck by a series of earthquakes since October. (READ: LOOK: Buildings destroyed by magnitude 6.5 quake that struck parts of Mindanao)

Marino party list went around Davao del Sur on Monday, December 23, to provide tents to families affected by the recent earthquakes that rocked parts of Mindanao.

They visited Digos City, Padada, Hagonoy, Matanao, and Bansalan in Davao del Sur to turn over 500 tents to local government units for use of the earthquake victims.

“We are supposed to come home for Christmas to spend time with our family. These tents are not homes, but they provide shelter for our brothers and sisters until they can rebuild their lives and their homes after this terrible tragedy,” said Marino Representative Sandro Gonzalez.

They also gathered toys from themselves and other donors to give to children of affected families.

“We recognize that Filipinos, even in times of tragedy, will find a way. All we provided were the means to empower them – a temporary roof for their families and toys for their children, so life can continue to be as normal as possible in this difficult time,” said Gonzalez. Shortly after receiving their Christmas bonuses, employees pooled their donations to purchase relief goods for 200 families in Magsaysay, Matanao, and Padada municipalities.

“Christmas is about giving. With the situation of our brothers and sisters in Mindanao, especially during this time, we should do our best to help and provide relief to them,” said Smart national key accounts head Precy Katigbak.

A gift to those affected by Typhoon Tisoy Among the communities that also felt the brunt of recent disasters were those affected by Typhoon Tisoy, which displaced more than 120,000 families in Central Luzon, Bicol, Eastern Visayas, Metro Manila, and Mimaropa after it made landfall on December 2.

Several buildings, trees, and electrical posts across the Bicol region were also damaged after Typhoon Tisoy lashed the Philippines with fierce winds and heavy rain.

Hoping to rekindle the Christmas spirit in the area, the Aboitiz Group, led by its social development arm Aboitiz Foundation and its various business units, conducted relief operations and re-energization efforts in Albay and Sorsogon, which were badly hit by the onslaught of the strong typhoon.

As of December 14, they have reached out to more than 7,000 victims of Typhoon Tisoy, distributing food packs and water. They also donated tarpaulins and chainsaws to help provide temporary shelters and clean up debris. The Aboitiz Group contributed a total of P4.12 million worth of relief efforts.

“We want to bring hope to our fellow Filipinos. After all, this is what Christmas is all about,” said Aboitiz Foundation Chief Operating Officer Maribeth L. Marasigan.

Aside from immediate relief assistance, the AboitizPower Distribution Unit (DU) with Sorsogon Electric Cooperatives (SORECO) I and II rehabilitated damaged electrical lines in 9 barangays in Irosin, and another 9 in Sorsogon City. 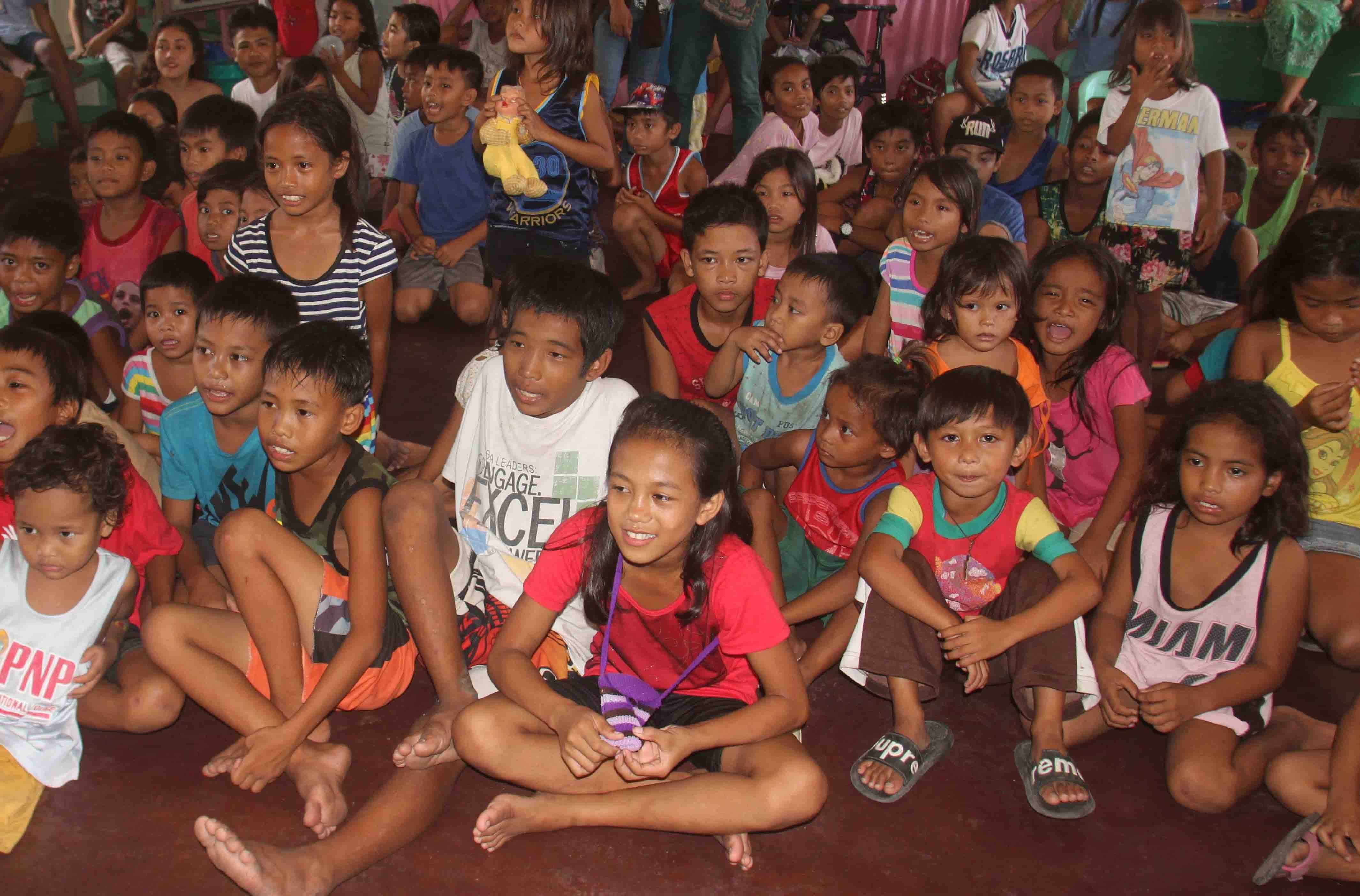 These children coming from Barangay Dao, Pilar town in Sorsogon, and whose parents are living with them at Pilar Central School were left homeless after their houses were destroyed due to Typhoon Tisoy. They have been staying in the school since December 2. At least 262 families are staying in the school.

Molleda said that Grades 11 and 12 arts and design students chipped in at least P50 each to generate funds for the Christmas initiative.

“My students opted not to have a Christmas party celebration. Instead, they contributed P50 to augment their funds to buy gifts like toys, school materials and food provision to give Christmas merriment for these children staying in evacuation centers as their homes were totally destroyed by Typhoon Tisoy,” she said.

Hoping for a new home

Aside from clothing and other items, evacuees hope to find a new home.

Jesebel Brecenio, 22, is a single mother of twins. She is living in one of the classrooms in the school with her family and relatives.

“It’s Christmas. Sadly we don’t have a home. We will be celebrating Christmas Day in a crowded evacuation center. We wish to have a home before Christmas or New Year. But the problem is my husband could not fish regularly due to bad weather affecting us for few months now,” she said.

Esperanza said that they’re allowed to stay at PNCHS as a temporary shelter until New Year’s Day. After that, she said they will need to move out to give way for students’ regular class.

Do you know of other groups that may be spreading the Christmas cheer, especially to communities affected by recent disasters? Share them with us! – with reports from Rhaydz B. Barcia/Rappler.com