Facebook Twitter Copy URL
Copied
The residents, whose houses were razed by the fire at the height of the typhoon, are sad because they have to start from scratch again. It was only 6 years ago, when Super Typhoon Yolanda made them homeless.

TACLOBAN CITY, Philippines – “Nasunog na an aton balay (Our house was burnt down).”

These were the words that greeted Gina Diaz on Christmas day when she was told their house was razed after a fire broke out in Brgy. 66 Paseo de Legazpi, Tacloban City on Tuesday evening, December 24, about the same time of Typhoon Ursula’s landfall.

The village, situated along Anibong Bay, was among those devastated 6 years ago by super typhoon Yolanda.

Tacloban City-Palo area in Leyte was Typhoon Ursula’s second stop after it made landfall in Salcedo, Eastern Samar on Tuesday afternoon. (READ: Leyte under state of calamity due to Typhoon Ursula) 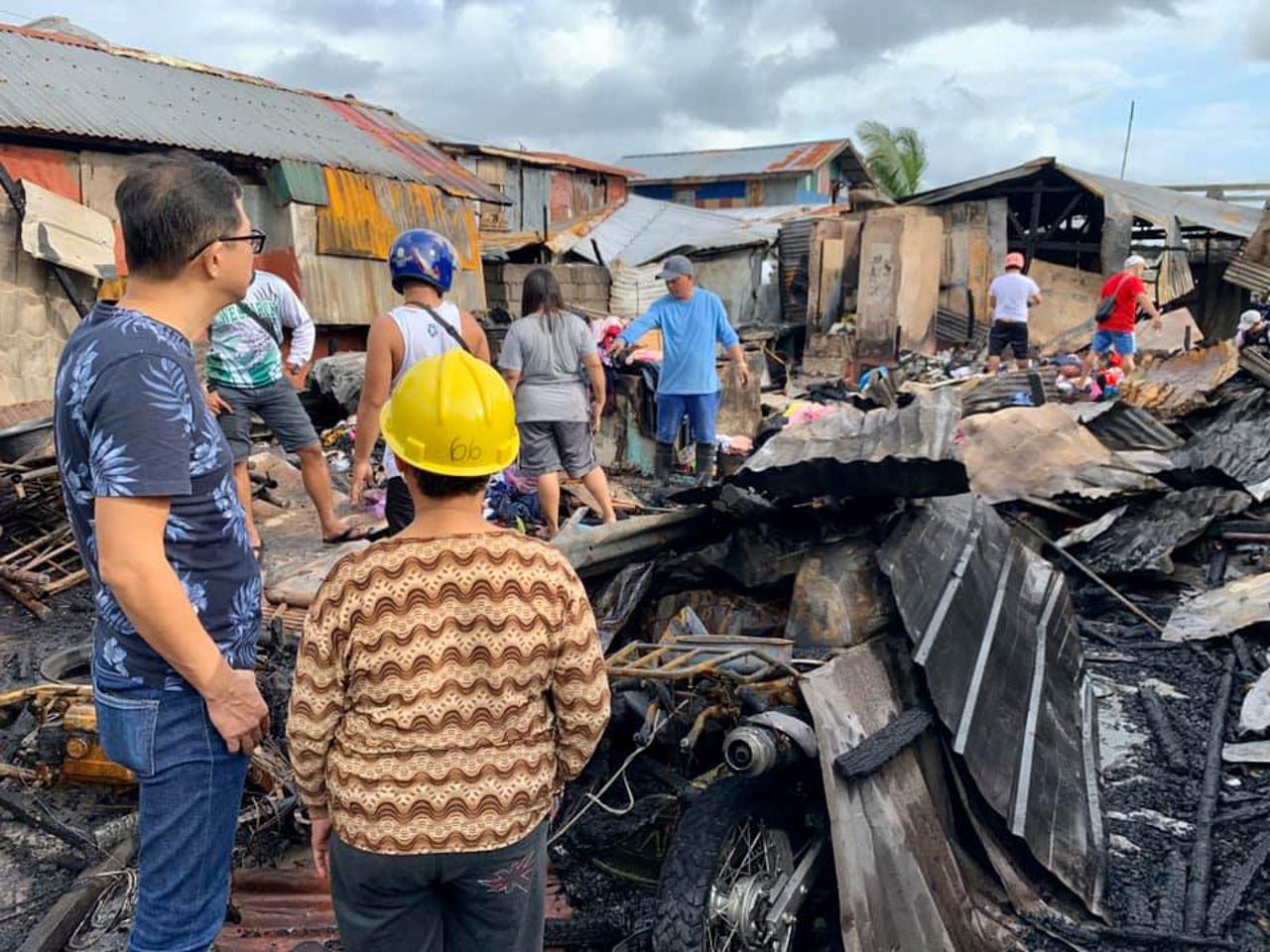 Diaz and her family were on their way back home after spending the night at a relative’s house in Bagacay, where they evacuated before Typhoon Ursula intensified. (READ: Typhoon Ursula death toll rises to 28)

(When we were at the gasoline station [on our way home], I received a call from one of my children saying her classmate told her, our house was burnt down. We didn’t expect the fire because we thought that we should be worried of the typhoon.)

“Siguro pagsubok han Diyos ha amon (Maybe this is God’s challenge to us),” she added.

With news about the typhoon days before Christmas, Diaz anticipated a sad holiday season for them. However, they still hoped they could get help as they welcome the new year.

Bureau of Fire Protection (BFP) Fire and Arson Investigator Jonald Lace said 18 houses were affected – 13 houses totally damaged and 5 partially damaged. Lace said that the cause of the fire was under investigation.

He added that BFP would release a final report within 45 days from the date of the incident.

For 54-year-old Gerry Alcaraz, a fisherman, their family’s Christmas celebration was spent rebuilding their house which was totally destroyed by the fire.

He never thought he would have to build a house all over again after it was first devastated by Yolanda 6 years ago. His wife Marivic said she felt really bad when she was told nothing was left of their house.

She remembered safekeeping their clothes and things, and placing these at the second level of their house so these would not get soaked with heavy rain when Typhoon Ursula struck.

Aside from preparing their things, she made sure her family evacuated before the typhoon made landfall –  lessons she learned from Super Typhoon Yolanda.

But Marivic wished she also brought their things with them when they evacuated this time. (READ: IN PHOTOS: Buildings, homes destroyed as Typhoon Ursula batters parts of Visayas)

“Malain gad. Nagtinuok gad ako. Sympre ky imbes na may mga gamit ka na, nagkaubos pa, (It was really awful. I cried a lot. [We have recovered from Typhoon Yolanda and] acquired these things. But now, we’re back to scratch),” Marivic said, recalling her experience with Yolanda and how they strived to rebuild again. Now that the fire took even Gerry’s fishing materials and the equipment they use for selling fish at the market, Marivic said they would welcome 2020 with nothing. The couple also called for help, hoping they’d be supported to start again.

“Kunta makabiling kami puhunan para makabalik pangisda (I hope we can find a financial assistance so I can get back to fishing),” Gerry said.

Celebration amid the tragedy

For most of the victims, Christmas time meant repairing burned down houses and cleaning debris.

It was the second day since Leonardo Echosa skipped his work so he could help repair and clean his family’s home after the fire and storm.

“Diri maupay. Ky sympre pasko tapos mag new year, nasunugan pa, nabagyuhan. (It’s not good because we’re celebrating Christmas like this. Then in a few days, it’s a new year. We were both affected by the fire and storm),” Echosa said.

“Tapos birthday ko ngani yana (In fact, it’s my birthday today),” Echosa said as he gathered scraps he could sell in the junk shop to earn money. There are 18 of them living in one house. Leonardo lives with his father Leo, together with his own family and that of his siblings’ families.

Despite the tragedy, they shared the food that his wife and his siblings prepared for him as they celebrated his birthday, even after the damage caused by the fire. Leonardo, whose house was partially damaged, said they have not received help from the government yet. Meanwhile, some private companies sent goods such as ice cream and cake to the victims.

Those families, whose houses were totally damaged, received water jugs, pails, hammer and sleeping mats through the office of the Vice Mayor Jerry Yaokasin on Thursday afternoon, December 26. The village captain Fe Marteja continued to call for help for the affected families in her community as they welcome the new year.

She said she knew of one thing – she fervently prayed these affected families would never be homeless again. – Rappler.com