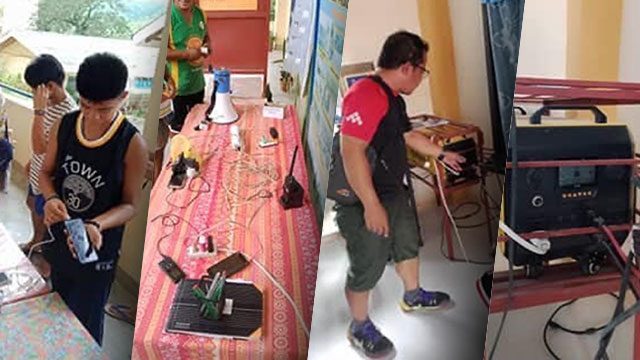 Facebook Twitter Copy URL
Copied
ICSC is also planning to set up charging stations in other severely-affected areas in the region, most especially in the remote islands of Guiuan, Eastern Samar

TACLOBAN CITY, Philippines – A number of Tacloban residents affected by Typhoon Ursula (Phanfone) will not have to worry about welcoming the new year without light.

Institute of Climate and Sustainable Cities (ICSC), a Philippine-based non-profit, has set up solar-powered charging stations at the Scandinavian Elementary School in Barangay San Roque and at 58 P. Burgos St, Barangay. 38 in Tacloban City.

Through their project “RE-Charge Pilipinas,” ICSC provided charging stations that could enable residents to charge their flashlights, portable radios, and cellphones.

According to ICSC project coordinator Arturo Tahup, they decided to set up charging stations at their partner schools and communities after Typhoon Ursula felled several electrical posts and lines when it made landfall in the neighboring province of Eastern Samar on Tuesday, December 24. (READ: As of December 27, Typhoon Ursula death toll rises to 28)

“Actually the setup was there already even before Ursula, yet we decided to activate the facility at Scandinavian Elementary School as a charging facility still because of the power outage being experienced by the community.” Tahup said. On September 23 of this year, ICSC installed a solar-powered generator at the Scandinavian Elemetnary School to initially help lessen the school’s electricity costs and energize its computer room and school library.

After Typhoon Ursula, the same generator was used to power the charging stations for residents in need. ICSC is also planning to provide the same services to other severely affected areas in the region, most especially in the remote islands of Guiuan, Eastern Samar.

“This coastal areas were severely damaged by typhoon Ursula, and by these coming days. we will be sending our team to the ground to do the rapid damage assessment for us to be able to plan out on what we can do there,” Tahup said.

The typhoon has left a trail of destruction in several parts of Eastern and Western Visayas. In order to enable the release of emergency funds for rehabilitation, Leyte and Eastern Samar declared a state of calamity following the devastation brought by the Ursula. (READ: Families in Tacloban affected by fire during Typhoon Ursula appeal for help)

As of Saturday, December 28, several areas of Tacloban City still had no electricity.

In its Facebook page, local electric cooperative LEYECO II said that its linemen and other technical personnel were working overtime to expedite the restoration of electricity in the province.