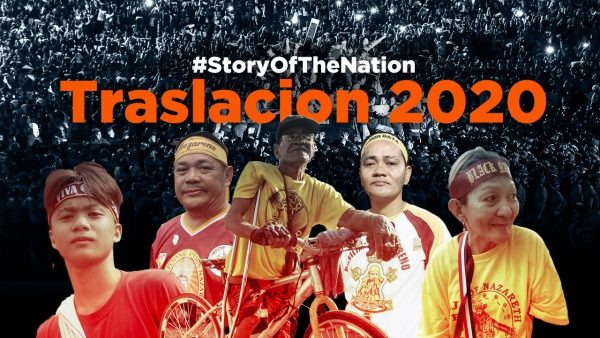 MANILA, Philippines – Thousands of devotees joined the celebration of the Feast of the Black Nazarene on Thursday, January 9.

For its #StoryoftheNation campaign, MovePH, the civic engagement arm of Rappler, partnered with The Varsitarian of the University of Santo Tomas and The Communicator of the Polytechnic University of the Philippines, and went around the procession route to ask devotees what made their devotion strong and faithful. (READ: Filipinos online offer prayers for world peace on Feast Day of Black Nazarene)

Nanay Bing, 55, a canteen helper from Makati, said she had been participating in the Traslacion ever since she was a child. She must have attended this for almost 30 years, she said.

During this annual religious event, she prays for a complete family.

(I am praying to be reunited with my children because we are separated due to so many problems. Then, to be given the strength to work and surpass the challenges of life.)

Emelita Araw celebrated her 79th birthday while taking part in the procession. She said the devotion to the Black Nazarene was handed down by her mother.

(I’ve been a devotee for a long time since the Black Nazarene and I have the same birthday. Since birth, I was being brought by my mother [to the procession]. I was in a life-and-death situation when I was still a baby, that was why my mother became a devotee. Since then, we have never failed to attend this spiritual gathering every year.)

Devotee for a reason

After the tragic experience of losing a child, 58-year old Corazon dela Cruz said her devotion to the Black Nazarene healed and restored her.

“Kasi nung nanganak ako noon, patay ‘yung unang anak ko. Kaya nung nanganak ako ulit, nagdirediretso na pamamanata ko. Palagi ako namamanata para sa mga anak ko,” Dela Cruz said. (My firstborn died after I gave birth to her. So, after my second pregnancy, I continued my devotion to the Black Nazarene and always made sure to keep it for my children.)

Luzviminda Constantino’s devotion to the Black Nazarene came as a family tradition that she wanted to continue.

“Nung nawala ang asawa ko, ako na ang nagpatuloy (When my husband passed away, I continued the tradition for him),” the 69-year-old Constantino said.

This year, she asked for long life and good health for her and her grandchildren.

Though not really a prayerful and religious person, 32-year-old Karlo Laquindanum from Velasquez, Tondo, admitted he felt the call to seek and touch the Black Nazarene to show his devotion.

He said he’d been doing this since 2000, and this year is no exemption. He was one of the thousands of devotees who made it a point to touch the Black Nazarene during Traslacion 2020.

(I was just invited to join the procession at first until I got used to the feeling of fulfillment. It makes me happy, especially when I am able to serve the Lord by participating in the Traslacion. If I am able to touch it, I’d feel better, and my parents, we’d have a good life every year and that we would be safe.)

The case is different for 52-year-old Mario Rey.

He said he decided to take the challenge of trying to go near the Black Nazarene during the Traslacion when his youngest child faced a critical condition after experiencing a 3-day fever.

“Siyempre, ako’y namanata kasi buhat nung aking bunso ay nag 50/50. Talagang ako’y nanalig sa Kanya,” he said.  (I became a devotee because of my youngest who faced a 50/50 possibility of dying. I truly put my trust in Him.)

Hailing from Calamba, Laguna, 40-year-old Nestor Obin made the journey to Manila to attend this year’s Traslacion on Thursday. He did it to give thanks for the blessings he had received.

After being infected with tuberculosis, Manong Antonio said he remained thankful he was able to recover.

(I lost weight, just skin and bones. I was being lifted just to be able to eat. This is my way of thanksgiving. When I got sick, I thought I was going to die. I wore the clothes that they gave me until I got well.)