Jan 16, 2020 7:36 PM PHT
Ericka Nieto
Facebook Twitter Copy URL
Copied
Carrying the trauma of fleeing because of the volcanic eruption, evacuees in Lipa and Malvar also fear they may have to rebuild their lives from scratch 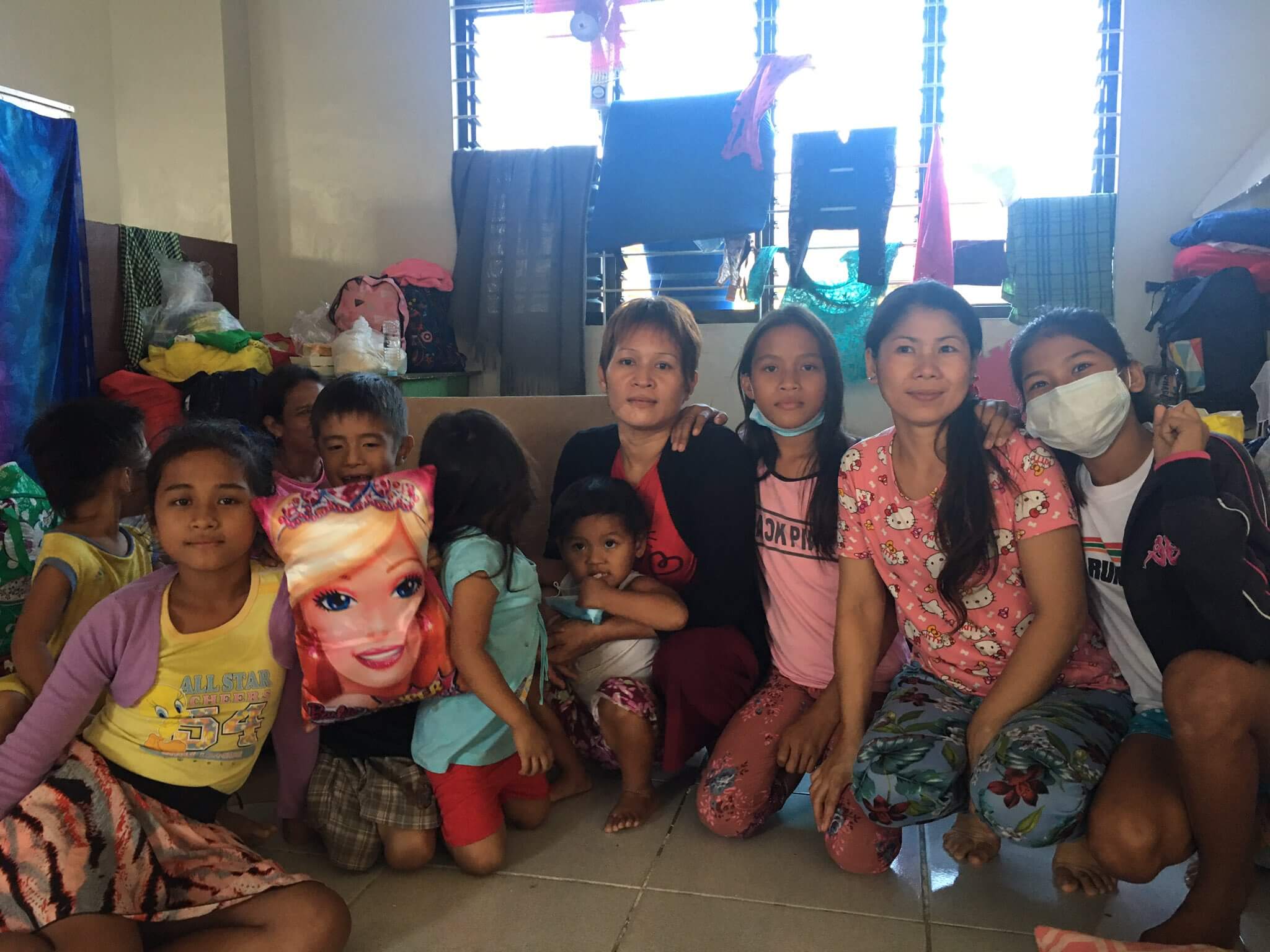 BATANGAS, Philippines– Since the Taal Volcano started spewing ash on Sunday, January 12, Batangueños continued to persevere even as they faced an uncertain future in light of an imminent eruption.

The volcano has been on Alert Level 4 since Sunday night, as state volcanologists warned that a “hazardous” eruption may occur “within hours or days.” (READ: What you should know about Taal Volcano)

Thousands of Filipinos have fled their houses following the ash eruption, with some leaving behind not just their homes but also their household pets and livestock. (READ: How groups are saving stranded animals near Taal Volcano

Carrying the trauma of fleeing because of the volcanic eruption, evacuees in Lipa and Malvar also fear they may have to rebuild their lives from scratch.

Merlita Caguitla, an evacuee from Inosluban, Lipa City, shared that a tragedy like this was not new to her as she survived the Taal volcanic eruption in 1977. (READ: TIMELINE: Taal Volcano eruptions since 1572)

Her experience made her fear for the lives of her family members as she thinks the same catastrophe would happen again.

(I’m afraid because I have an experience when Taal Volcano previously erupted. The rocks that the volcano spewed were head-sized that people have a small chance to survive.) 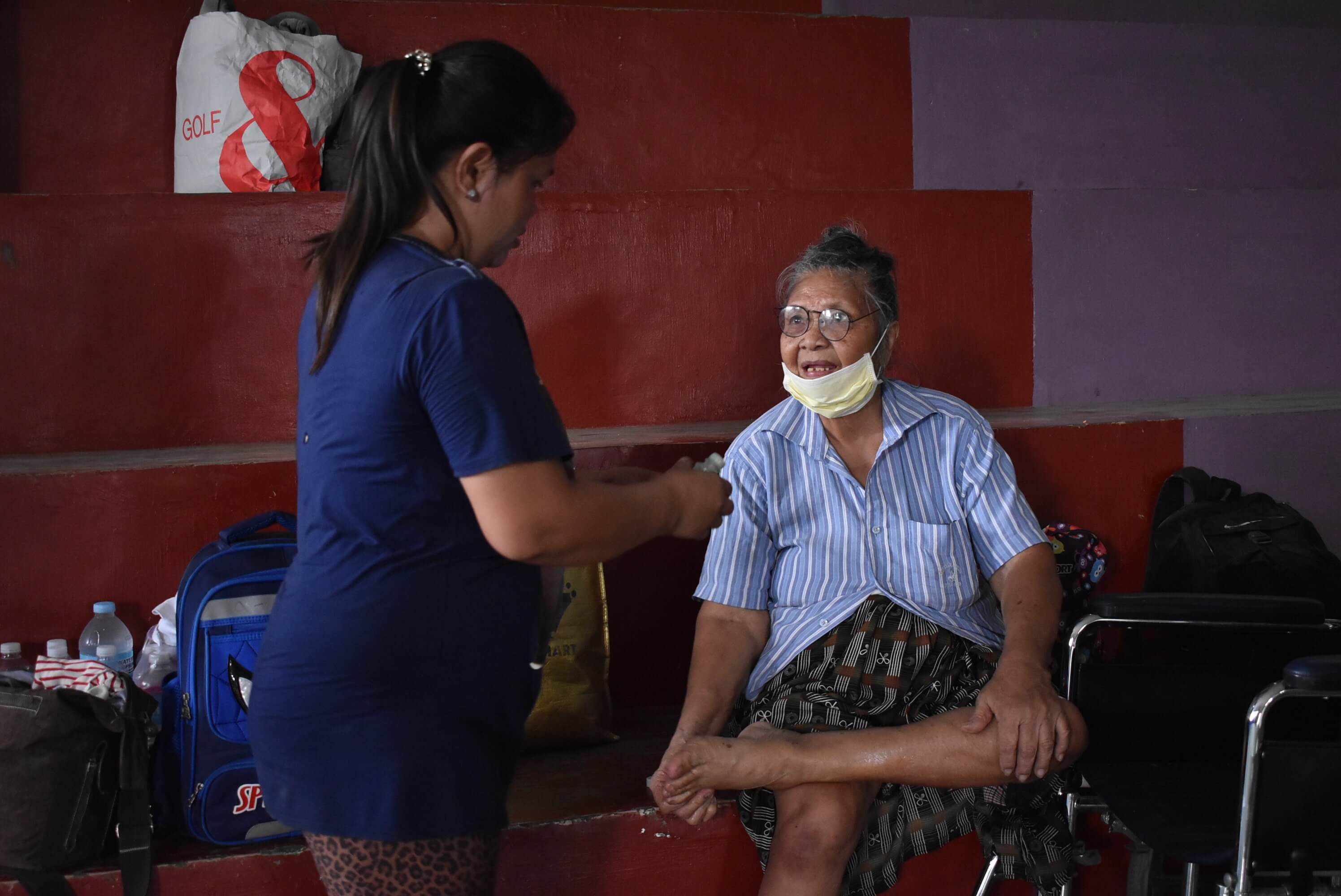 Meanwhile, evacuee Camille Aparejado recalled how difficult it was to evacuate with her family when the volcano erupted on Sunday.

(When the volcano erupted, we immediately rode a boat to leave the island. I was thinking how our situation would be. I was carrying my children and I have my mother who couldn’t walk and my father who couldn’t hear. We didn’t know what to do and how to run away.)

The hard times didn’t end there. Once evacuated, Aparejado had to transfer with her family to several evacuation centers in Talisay, Batangas, looking for a place to stay that wasn’t inside the danger zone. They eventually sought refuge in Malvar, Batangas.

Though she faced a difficult ordeal in light of Taal Volcano’s eruption, she was thankful that her whole family was together and safe in the same evacuation center. 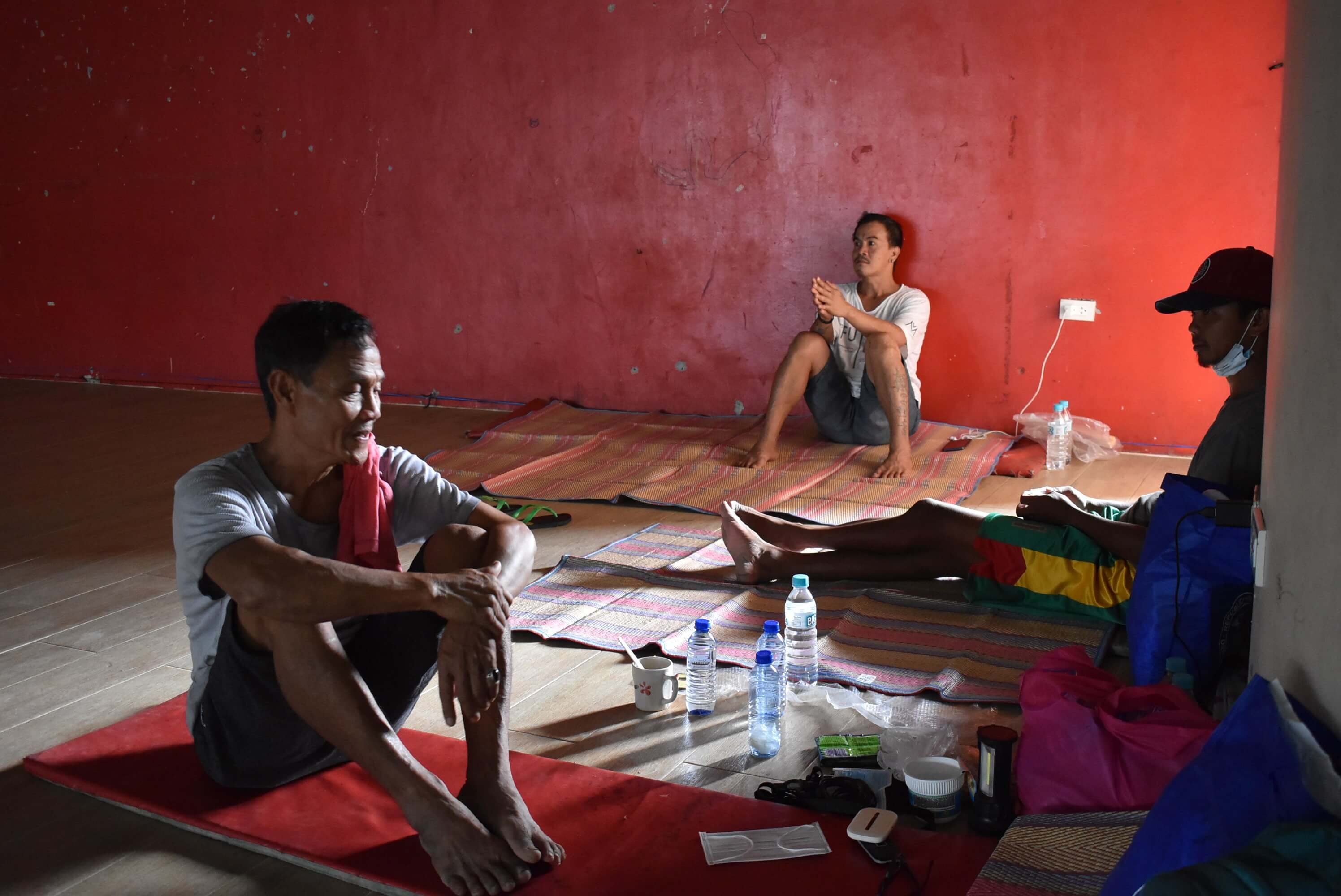 This wasn’t the case for Fernando Duenog who also struggled to evacuate but eventually got separated from his family.

(We were rescued at around 10 pm. We had a hard time leaving [the village because] it was raining mud. I got separated from my family who are now in Calaca, Batangas because I secured our animals first.)

Residing near a body of water rich in resources, most of the locals of areas near Taal Lake made a living from fishing and farming. (WATCH: Fishermen risk lives for catch around restive Taal Volcano)

Despite being warned  not to return to the danger zones, Leonard Alcantara shared how his friend went back to check their horses, fearing that they would lose their livehood.

Now Leonard Alcantara and his friends will have to start over.

(Our animals and horses died. Our friend went back to Talisay to check on them. We have nothing left with us now.)

Fearing the safety of her livestock, Maria Luz Abelindle, also checked their animals’ condition at San Sebastian, Balete, Batangas. She said that though these were safe, they do not have anything to eat and might eventually starve to death.

Though evacuees receive basic needs in their evacuation center, Abelindle added that she worries that there would be nothing left for her livelihood once they return to her village.

(We are safe here in the evacuation center. We are receiving many donations but after this disaster, we are worried because our livelihood is catching tilapia which will greatly affect us.) 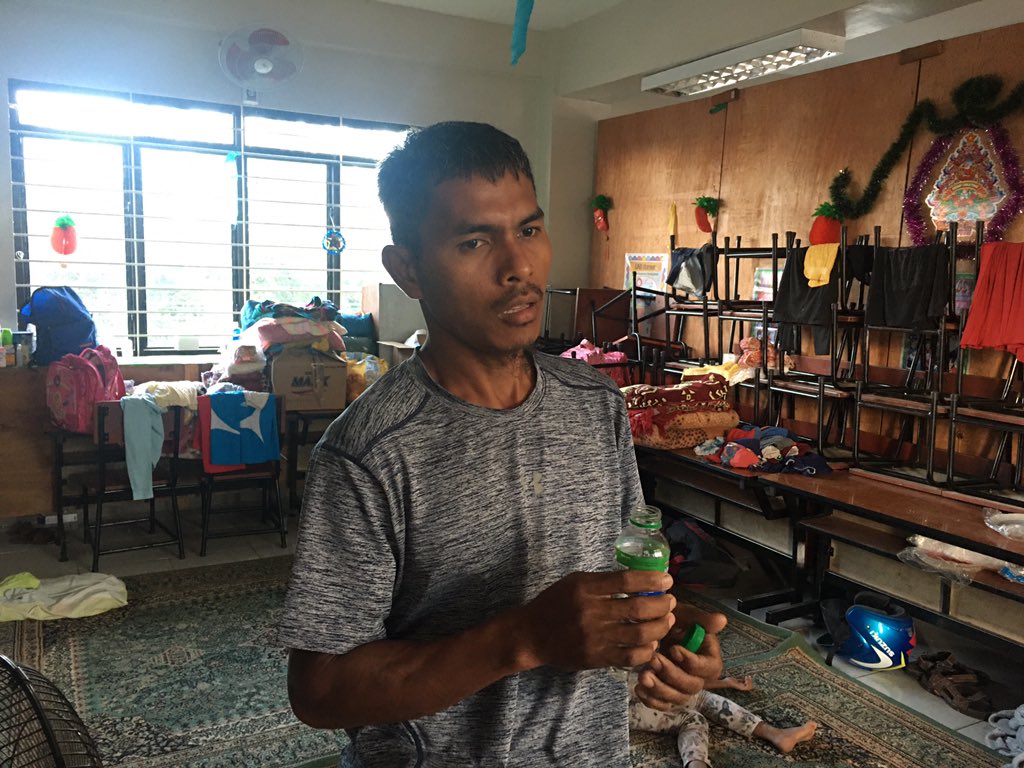 Mario Caguitla Jr shared the same sentiment as he depended fishing as livelihood. He was considering shifting careers.

(Now we are still safe but when the volcano erupted, the ash landed on the lake and now the fishes are affected, which is our livelihood. That is what we worry after this. We are thinking of possible alternatives and I am considering to apply for another work.)

Many families are dependent on the Taal Lake for their livelihood. Now that the volcano threatened to destroy their way of life, their future seemed even more uncertain. 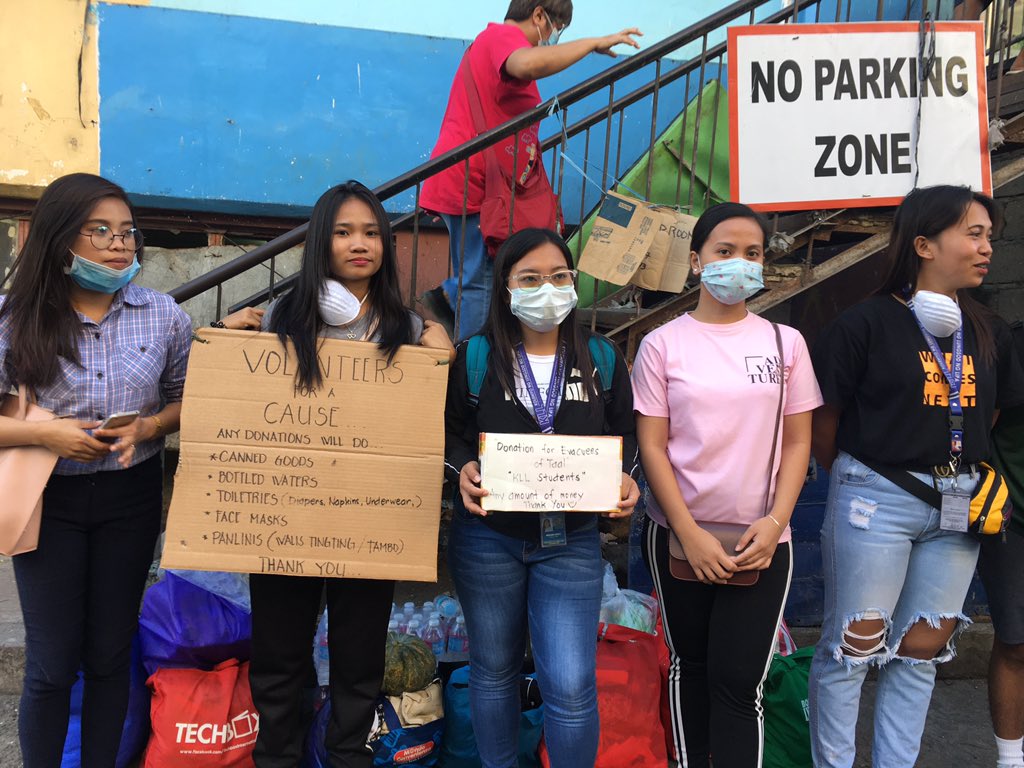 In time of this crisis, the evacuees found relief in the volunteerism of Batangueños and other Filipinos.

Aside from efforts of government agencies and other organizations, students were joining different drives and efforts to send relief to evacuees. (READ: #ReliefPH: Help communities affected by Taal Volcano eruption)

Dubbing themselves volunteers for a cause, a group of students from Kolehiyo ng Lungsod (KLL) ng Lipa carried signs outside Lipa City Public market to call for donations for the evacuees staying in the area.

Likewise, Justin James Dimapasok, a student from De La Salle Lipa (DLSL), volunteered in the Philippine Red Cross. He was deployed to evacuation centers near ground zero areas to assess the needs of evacuees.

Camille Resma, along with other members of De La Salle Lipa’s Lavoxa Group of Publications, volunteered in the Art Relief Mobile Kitchen to cook hot meals for evacuees. She was also raising money through a fundraising effort online to help evacuees staying in Lipa City and Malvar

(I donated the basic needs of the evacuees. I know that I can only help if there’s a concrete action. There is a call of action because they need us.)

Knowing that face masks were needed to protect people from respiratory diseases caused by the ashfall, Carla Abrenica, a student of University of Batangas, distributed free face masks sewed by her mother as supply ran out in Metro Manila and nearby provinces. (READ: How to stay safe during volcanic ashfall)

With the province of Batangas declared under state of calamity on Monday, January 13, the local government was working toward the relief, rehabilitation, reconstruction, and recovery to mitigate the effects of the disaster and stabilize the situation in the area.

Still, the situation of Batangueño evacuees in the next few days was still uncertain as they dealt with the imminent hazardous eruption of the Taal Volcano.

For some, they might never go back to their homes, as President Rodrigo Duterte declared the island volcano of Taal off-limits, urging the relocation of 4,000 residents. – Rappler.com

Ericka Nieto is a Rappler mover from Batangas. She is a communication student at De La Salle Lipa and the Associate Editor of the Lavoxa Group of Publications.