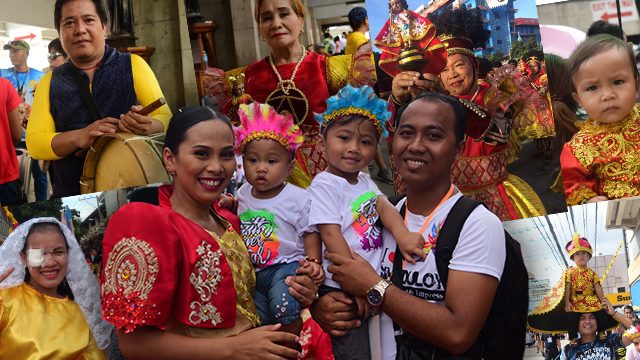 CEBU CITY, Philippines – Over 3 million people came out to take part in the annual Fiesta Señor and Sinulog Festival in Cebu City on Sunday, January 19, and Cebu Movers were assigned to walk the streets to find the most interesting stories from this year’s participants.

Standing out in the crowd, for instance, were Carmela Redoble and Lester Atillo with their child in full Sto. Niño attire.

The family of 3 makes it a point to join every celebration of Sinulog as part of their vows to the Holy Child.

Lester himself made the costume for his son, starting with a crown when his son was only a year old in 2017, and whipping up the full attire this year. Their child was supposed to be the couple’s second, until tragedy struck and they lost their first-born.

This tragic loss, however, did not hinder Carmela and Lester from keeping their faith to the Sto. Niño. Instead, they took the love they couldn’t give to their lost child and showed it instead through their devotion.

The couple believes that it was the Sto. Niño who granted them their second child. They thus made sure to be part of every Fiesta Señor celebration from then on.

(This is our vow to the Sto. Niño and to our child who’s no longer here – that we should continue the love we weren’t able to give our child.)

Here’s what other devotees prayed for during this year’s Sinulog celebration, as gathered by our Cebu movers for MovePH’s #StoryOfTheNation campaign:

Eiver Ky Villegas is a Rappler mover from Cebu City. He’s a Journalism student at the University of San Jose-Recoletos and is currently the Opinion Editor of FORWARD, the official publication of USJ-R.