Media and lawfare: Journalists ‘woke up to a storm’ under Duterte administration 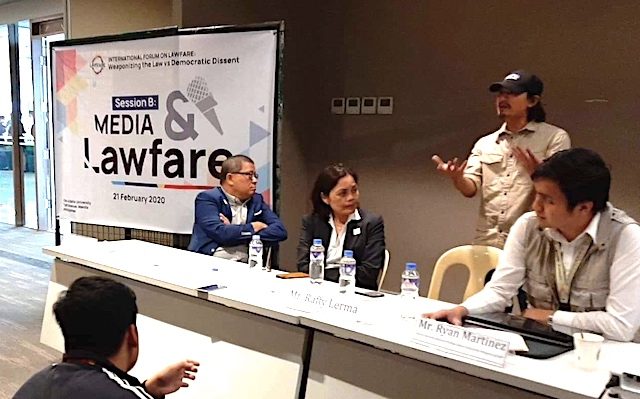 Facebook Twitter Copy URL
Copied
'2020 should be the time for action, and should be a time for reflection that leads to very concrete steps,' says Rappler managing editor Glenda Gloria

MANILA, Philippines – Attacks against Philippine media have continued even after democracy was restored in the country in 1986, and have intensified over time especially under the Duterte administration, prominent journalists said on Friday, February 21.

Rappler managing editor Glenda Gloria shared how Filipino journalists in the country faced attacks and threats under various administrations, as she and other journalists tackled media and lawfare at a breakout session during the international forum on lawfare on Friday.

“Lawfare” – the portmanteau of law and warfare – is described as the perversion of the law and its weaponization as a tool to silence dissent.

Gloria said that in the case of Philippine presidents, “the way they use the law and legal system reflects their understanding of the demands of democracy,” the burdens of public service, and their view of how power should be wielded to sustain public support.

After discussing what it was like to be a journalist under a democracy from the presidency of the late Corazon Aquino to that of her son, Benigno Aquino III, Gloria shared that under the administration of President Rodrigo Duterte, the Philippine press faced bigger challenges.

“Now we woke up to a storm, and this situation is different for a number of reasons,” she said. (READ: ‘Guns, drug lists, trolls…but Duterte’s biggest weapon is the law’)

Gloria said that under the current administration, the attacks were no longer just directed at individual journalists but also at media organizations.

“This is the first time that the power of the presidency is used to mobilize practically an entire bureaucracy, and to invoke all the legal principles there are, and the Constitution and the Revised Penal Code, to first redefine the law,” Gloria said.

She noted that it was the first time that the Securities and Exchange Commission (SEC), an indepedendent regulatory body, had acted against a Philippine media company.

As of January 30, 2020, there were at least 7 cases being tried in court against Rappler CEO and executive editor Maria Ressa as well as Rappler’s directors and a former researcher. (LIST: Cases vs Maria Ressa, Rappler directors, staff since 2018)

“First is the pattern of utility. He understands the resources and the capabilities of different forms of media and he is not afraid to lose them,” Nery said.

Aside from utilizing the government’s resources to attack journalists, Nery also stressed the pattern of hostility that the Duterte administration has shown toward the media.

“If he doesn’t like you, he will go against you,” Nery said, adding that this can be observed in the cases against Rappler and ABS-CBN.

“These patterns explain why government lawyers like Calida are now using obscure civil actions like quo warranto petition to put pressure on the media,” he added.

The Office of the Solicitor General had initiated the SEC investigation into Rappler, and had filed a quo warranto petition against ABS-CBN before the Supreme Court.

Gloria stressed the importance of fighting back, citing how Rappler, its reporters and regional correspondents filed a petition before the High Court in 2019, seeking to end Duterte’s coverage ban against them.

“In the end, no matter the grieving and the crying and the jailing, and having to deal with all the cases, I think 2020 should be the time for action, and should be a time for reflection that leads to very concrete steps. Because sometimes, it really just takes one step in the face of a dying democracy to actually give us the sense of power,” Gloria said.

Freelance photojournalist Raffy Lerma, who has shown the realities of the  Duterte’s bloody drug war through his work, and College Editors’ Guild of the Philippines Deputy Secretary General Ryan Martinez also joined the panel discussion on media and lawfare. – Rappler.com