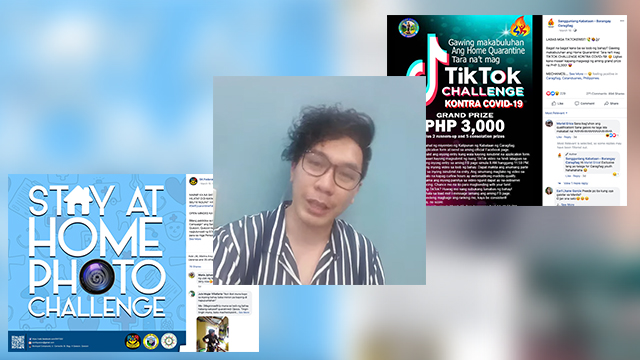 MANILA, Philippines – Several youth councils and a local government have created ways to encourage the public to stay at home as parts of the country have been placed under lockdown or “enhanced” community quarantine” in a bid to contain the spread of the coronavirus.

After the declaration, local officials were quick to respond with creative efforts, compelling the public, especially those who still try to roam outside, to remain at home. (READ: Is the Metro Manila coronavirus lockdown bound to fail?)

(There are a lot of youths who are still going outside their houses despite the dangers. We told ourselves that we have to think of innovative ways to stabilize our youth. Our main objective is to enforce Stay at Home policy. Even if they are inside their homes, they can be productive.)

In a data released by the Department of Health on Friday, March 20, Catanduanes province has 4,325 persons under monitoring.

The youth council launched on Wednesday, March 18, the “TikTok Challenge Kontra COVID-19,” enabling the public to remain interactive amid the lockdown.

In Quezon town in Quezon province, the SK Federation also used social media to convince individuals to stay at home, especially those who had arrived from Metro Manila.

Jolas Clemente, a member of the federation, said they were asked by their Rural Health Unit to help in implementing the strict quarantine for all households.

The social media challenge asked participants to take videos and photos of themselves inside their houses, thus helping the local government in making sure that the members of the community are not loitering outside.

Quezon province has one confirmed case of COVID-19, the disease caused by the coronavirus. As of Thursday, March 19, the province also has more than 40 Persons Under Investigation.

Time to bond with family

In Naval, Biliran, Mayor Gerard Espina offered P10,000 pesos for an online gimmick “that will compel them to stay at home and wait for updates.”

“We just don’t want the whole home quarantine experience to be depressing…We want to prove that you can still enjoy and be interactive while staying at home,” he said.

In a Facebook post, Espina informed his constituents that he will give instructions for 7 days, mostly taking videos and photos while doing home activities.

Biliran Governor Rogelio Espina imposed a 15-day limited border closure for people in the province from March 17 to March 31. In Naval, curfew hours have been enforced from 9 pm until 5 am.

According to the town mayor, the challenge does not only ease the government’s task in monitoring people, but also “gives more bonding time with the family.”

Despite the fulfillment he feels seeing the community participate, Cocjin also aired his sentiments over the national government’s lapses in responding to the pandemic.

The same sentimenets were aired by Alden Fajilan, the SK Chairperson of Barangay San Roque in Corcuera, Romblon who initiated an online gimmick to call for submissions of literary works and videos about COVID-19.

“Masaya na may halong disappointment…Ang mahirap lang talaga ay kakulangan ng mga kagamitan like thermal scanners (I am happy and disappointed at the same time. It’s hard because there is really a lack of medical equipment such as thermal scanners.),” said Fajilan.

Human rights group Karapatan earlier hit the government for placing almost all of its resources on military actions, instead of medical solutions: “The COVID-19 is a public health issue. Checkpoints should be primarily medical in nature. Why does it seem that personnel manning the checkpoints are fully armed with M-16 rifles instead of functioning thermal guns, personal protective equipment, and disinfection facilities?”

Cocjin said their initiative is their little way to fill the lapses in the national government. Meanwhile, he urged the youth to never lose hope.

“Ngayon ang oras upang kumilos….Malayo pa ang ating tatahakin upang mapagwagian ang problemang ito…Walang susuko (This is a time for action. We have a lot more struggles to face before winning this battle. Do not lose hope.),” he said. – Rappler.com