A pandemic makes neighbors look out for each other in Sorsogon 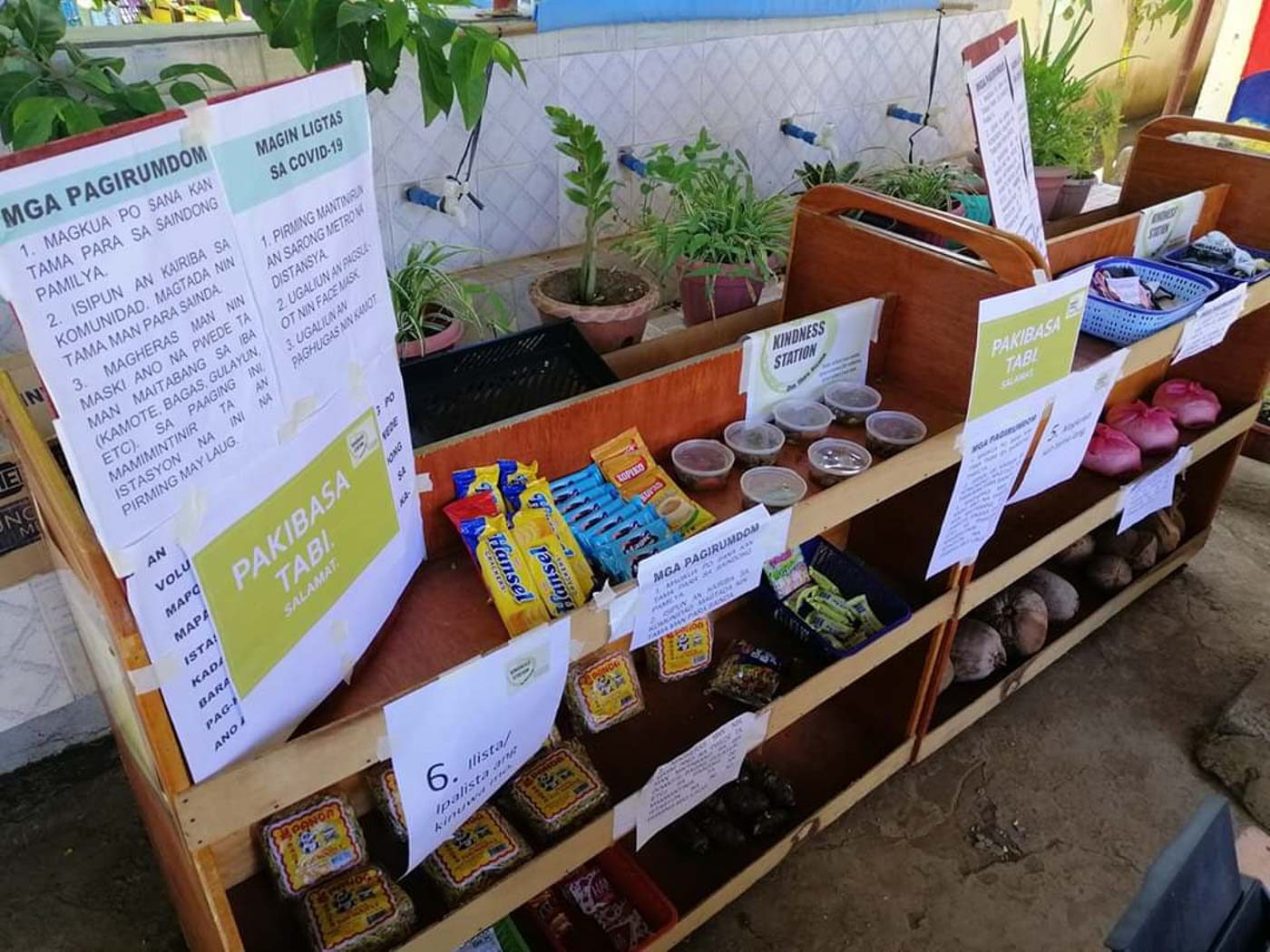 Facebook Twitter Copy URL
Copied
Kindness Station's response to the coronavirus outbreak is to encourage people to 'take what you need, leave some for others, and give what you can'

ALBAY, Philippines — A one-of-a-kind response to the coronavirus pandemic has been initiated in Sorsogon province.

“Kindness Station” by Caritas Sorsogon is encouraging locals to practice bayanihan via its makeshift food station, where food packs are placed on racks, from rice, instant noodles, canned goods, and some vegetables and root crops.

It’s mantra? Take what you need, leave some for others, and give what you can.

Since it opened on March 25 at the Buenavista Elementary School, its first partner area, donations have reached P70,455 as of April 5, benefiting “mothers and children, vendors who can’t sell, tricycle drivers who stopped taking passengers, construction workers who can’t go to work, and daily minimum wage earners who can’t earn even a penny, and persons with disabilities,” the Kindness Station said on its Facebook page.

The group said that P25,000 from the cash donations will go to the personal protection equipment (PPEs) of frontliners in Sorsogon.

Jean Lacsa, a school clerk, was among those who were able to get a kilo of rice and a can of sardines from the Kindness Station.

Lacsa said that others can get more items available depending on what they need for the day, adding that she finds the project helpful especially for the most vulnerable like the elderly. 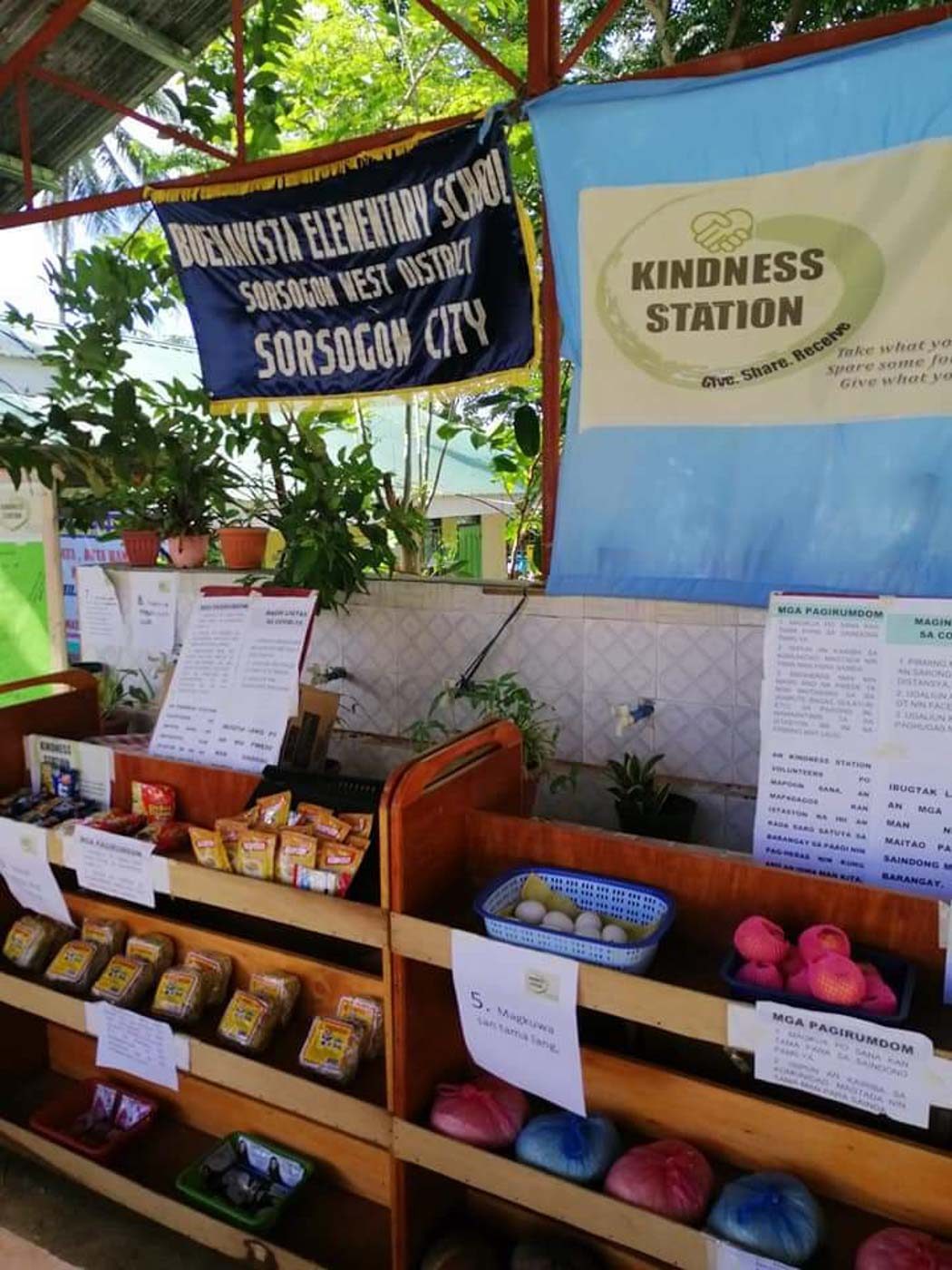 But even if her house is near Buenavista Elementary School, Lacsa said that she doesn’t intend to get every day so others can have, too.

According to her, “it helped renew the spirit of bayanihan” among neighbors. She does her part by volunteering.

“At a time when we often hear about inhumanity and indifference, to set up the Kindness Station was probably a futile attempt to many,” according to the group’s Facebook post.

Indeed, some people have wondered “how people can simply rely on their conscience to take only what they need?”

Others believed that the organizers should just give the goods away.

Yet, despite the odds, Kindness Station forged ahead and set up the first of now several stations. They hope that “it would be able to feed not just hungry stomachs, but to feed souls and give humanity a chance.”

“We thought it was worth a try, especially now is probably the best time to restore, relive and reintegrate kindness and generosity in every practice we have in our communities,” the group said.

Looking after each other

Marilyn Jañolan, one of the donors to the Kindness Station and a barangay secretary, said the project is helping everyone become responsible for one another.

In the words of another beneficiary: “I won’t get rice anymore because we still have rice and for others to be able to have their share.”

Ditha Lacsa, another recipient, likewise said it takes discipline to practice that.

Jañolan learned about the project when the organizing group had a courtesy call in her barangay, where she was the secretary.

“Our barangay captain approved of it because of the help it would provide to our community and the ECQ guidelines would be observed, adding that it made the entire council happy since the town market was far,” Jañolan said.

So, she was also encouraged to participate by donating food items that were not yet available in the station, like biscuits, crackers, and sugar.

This community-based charity movement is not only being replicated in other parts of the province but also in and outside the region.

The group acknowledged that soon, resources from the government and aid organizations will run-out, aid will cease and their collection boxes will be emptied. (READ: DSWD begins release of emergency subsidies to 4Ps beneficiaries)

But Kindness Station believed that empathy will triumph over greed and apathy when people regardless of social status are ready to do the multiplication of loaves and fish.

As it fully adhered to the quarantine guidelines, especially on physical distancing and proper hygiene and sanitation practices, it also looked forward to continuing the ripples of hope it created.

Why not? Its method is working- a localized humanitarian response where individuals and organizations are mobilized, in coordination with the local government, to reach the most needy, all while uplifting human dignity.

Irma Jacob, one of the organizers, said that they are now looking for a place to channel their goods for a start-up as a preparation after the lockdown when going out is no longer a challenge.

Indeed, the Kindness Station is unlike the relief operations people are used to. It is inspiring the locals of Buenavista and beyond.

As Jañolan put it: “I was giving because I wanted to help sustain it and be part of a community that helped one another not only in the time of crisis but always and every day. – Rappler.com