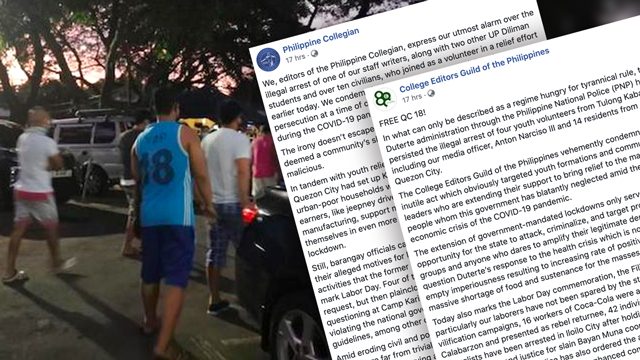 Facebook Twitter Copy URL
Copied
The arrest came after volunteers distributed face shields, prepared food at a community kitchen, and then held a protest in Quezon City on Labor Day

The arrest came after they distributed face shields, prepared food at a community kitchen, and then held a protest on Labor Day, Friday, May 1. (READ: 18 relief volunteers, beneficiaries arrested in Quezon City)

In a statement, the College Editors Guild of the Philippines (CEGP) condemned the arrest, citing how the government targets the youth and community leaders helping the marginalized people.

“The extension of government-mandated lockdowns only serves as an opportunity for the state to attack, criminalize, and target progressive groups and anyone who dares to amplify their legitimate demands and question Duterte’s response to the health crisis which is nothing but empty imperiousness resulting to increasing rate of positive cases and massive shortage of food and sustenance for the masses,” CEGP said.

Among those arrested were University of the Philippines Diliman students Joshua Marcial, Jandeil Roperos, and Jim Bagano, along with CEGP member Anton Narciso III who led the activities according to their lawyer Maria Sol Taule.

Taule said the cops told her that her clients did not carry quarantine passes, but she argued that no law explicitly penalized the failure to bring the passes outside their homes.

“We call for the immediate release of Anton Narciso and other volunteers and residents who did not commit any crime, but only conducted relief operations to serve the most neglected in our society, the urban poor,” CEGP added.

The Philippine Collegian also released a statement urging the government to take its hands off its journalists. One of its feature writers, Jim Bagano joined the relief effort as a volunteer.

“Bagano decided to volunteer in an impoverished community that he wished to write an article about for the paper. In no way did we, at the editorial board, chastise his involvement in such advocacy on the ground,” the Philippine Collegian said.

For them, the mass arrests are far from trivial that neither the volunteers nor the vulnerable sectors they are serving are to blame especially when the authorities fall short in providing much-needed assistance in this time of a health crisis.

“We thus support the calls for the immediate release of the youth volunteers and residents, and for an end to what appears to be politically motivated attacks on truth-tellers and activists behind the smokescreen of draconian lockdown measures,” it added.

This was also the sentiment of UP Chancellor Fidel Nemenzo who said that the arrest is a pressing concern that must be urgently dealt with.

In his message to The Philippine Collegian, Nemenzo said that, “The UP Diliman community is deeply concerned with this turn of events during the enhanced community quarantine.”

He also mentioned that the university officials will provide the needed assistance for the students to be released.

“We stand by our students and their right to engage in peaceful activities and the legitimate exercise of their freedom of expression and right to petition the government for their grievances,”Nemenzo said.

Mass arrests were also reported in other areas. On Friday morning, 10 feeding program volunteers were also arrested in Marikina City for taking out a placard calling the government for help. Marikina Mayor Marcelino Teodoro has since ordered their release, saying cops “overreacted.”

“Instead of responding to the socioeconomic needs of the people, these mass arrests will only worsen the plight of the poor. ‘Yung tumutulong, ikinukulong. ‘Yung mga opisyal na lumalabag sa batas, binibigyan ng special treatment (Those who are helping are getting jailed. Officials who are violating the law are given special treatment),” Karapatan Secretary General Cristina Palabay said. – Rappler.com