‘This is my sworn duty’: In UK, Kenneth Lambatan heeded nurse’s oath till the end 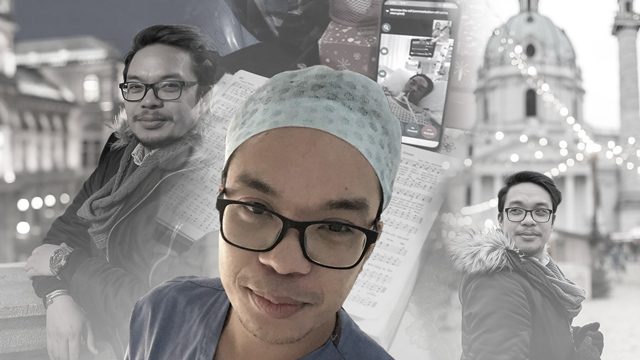 Facebook Twitter Copy URL
Copied
For 18 days, Kenneth tried to defeat the coronavirus. Before he was taken off life support, his family stayed with him virtually – from thousands of miles away.

MANILA, Philippines – Thousands of miles away from his family in the Philippines, 33-year-old Kenneth Lambatan believed it was his sworn duty as a nurse to stay on the front lines. So that while his work in a London hospital focused on research, he did not say no when asked to be a bed manager.

Kenneth was a cardiac research nurse at St George’s Hospital in United Kingdom (UK). Three years ago, he moved out of his hometown in Cagayan de Oro City to be a nurse in the UK. The job brought him a step closer to fulfilling his dream of one day becoming a doctor. (READ: Filipino nurses in UK: Working with fear and anxiety)

In April, St George management called Kenneth to join the coronavirus front line as a bed manager. “My mom was very apprehensive about him going to the front lines, but my kuya said, ‘Ma, this is my sworn duty and I have to do this regardless of any circumstance,’” recalled Ezel, the brother of Kenneth.

But more than a week after his assignment, Kenneth told his family he was sick with fever and a cough. His mother urged him to go to the hospital for treatment. (READ: Braving a pandemic: Frontliners battle fear to confront the novel coronavirus)

“Never did we realize, that was the last time we would hear from him,” Ezel shared.

It was through a call from his closest colleagues several days later that the family knew Kenneth had the coronavirus disease. Kenneth had to be intubated and placed in the intensive care unit. (READ: ‘Working with fear and anxiety’: Filipino nurses as UK frontliners vs coronavirus)

With the help of Kenneth’s colleagues, the Lambatan family was able to be in constant communication with the frontliner and his doctors, thanks to a video chat app. “We were hopeful. We prayed hard. His vitals were stable. We believed that faith can move mountains. For 10 days, he fought the greatest battle we could ever imagine,” Ezel said.

“It was totally heartbreaking to hear your mother cry pleading to God for my brother’s life. The rest is God’s plan,” he added.

As the coronavirus took a heavy toll on Kenneth, doctors noted that the frontliner wasn’t getting better and was getting dependent on life support. “Doctors, consultants, nurses recommended that it would be unethical if we prolong kuya’s agony,” Ezel shared. “We had to make the hardest decision of our lives: to let go of kuya.”

Even when they were in two different continents, the Lambatan family stayed by Kenneth’s side through a video call.

On the night of April 27, they had their last one, as they bid goodbye to the frontliner. When Kenneth was taken off life support, his mother read Bible verses and sang gospel songs by his side as the nurse lived his final moments. Kenneth Lambatan is among the medical workers all over the world who have succumbed to the disease after bravely manning the frontlines during the pandemic.

Ezel calls his brother a hero.

“My hero is an ordinary man with big dreams. He doesn’t wear any capes or have a superpower, but he has touched lives more than any hero can. His name is Kenneth R Lambatan. A name to be remembered until eternity,” he asserted.

Learning to love the profession

He had wanted to study biology in preparation for his dream of becoming a doctor. His mother, however, wanted him to be a nurse.

In 2003, he decided to make his mother happy by choosing nursing. Making sure his mother wouldn’t worry about the high tuition that came with the course, he secured a two-year scholarship. He eventually learned to love the profession.

After graduating from Xavier University-Ateneo de Cagayan (XU) in 2007 and passing the nursing board exam, he devoted his life to public service, serving the Northern Mindanao Medical Center for 8 years.

And then Kenneth tried his luck in London. Ezel remembered Kenneth screaming with joy when he found out that his work visa to the UK was approved.

Via Salinasal, his best friend, recalled how Kenneth was overcome with emotion when he finally saw the Big Ben in real life. It had been his dream to work in the UK.

Called Ken by his friends, he went on to work for the National Health Service since arriving in the UK in 2017. He started at Kingston Hospital as a recovery and research nurse before moving to St George’s Hospital to join their clinical research team.

‘One in a million’

Honoring the fallen alumnus, the XU Council of Nursing thanked Kenneth for his brave contribution in battling the coronavirus. (READ: ‘Doktor ng bayan’: Dr Fernandez lauded for his undying heart for service)

“We are proud and honored for Kenneth’s service towards the greater need and we will always be grateful for protecting us against COVID-19,” they said in a statement.

Friends for around 20 years, Salinasal described Kenneth as a “friend like no other, a one in a million.”

“Those who knew Ken remember him as an extraordinary person, son, brother, nurse, colleague and friend. He was larger than life, and sparked joy and laughter wherever he went,” she said.

On the day Kenneth was taken off life support, Salinasal had worn a hazmat suit, entered his room, and held his hand during his final moments.

“I held your hand the whole time, thinking of your family and friends who would give up anything just to be in my place, to be with you one last time,” Salinsal said.

“Sadly, Ken died without any of his family members close by, as they are all in the Philippines where Ken is from. The agony and loneliness his family must feel is unimaginable,” she added.

Salinasal shared how Kenneth had many dreams for himself and his family. Ezel said Kenneth had planned to study medicine in the UK.

Hoping to give back the love that Kenneth gave to all that he knew, Salinasal set up a fundraiser in honor of him for his family.

“We would like to show his family just how much Ken was loved and celebrated by everyone who knew him by setting up this fundraiser for them. Ken had so many hopes and dreams for himself and his family…We hope that for his family, Ken’s dreams for them will live on because of your kindness and generosity,” Salinasal said.

Those who want to give a contribution to Kenneth’s family may donate here. – Rappler.com