Sign the petition: Join the call urging gov’t to put ABS-CBN back on air

May 13, 2020 3:14 PM PHT
Rappler.com
Facebook Twitter Copy URL
Copied
To persuade government agencies to act on the matter, the petition appeals to the NTC, Supreme Court, and the House of Representatives 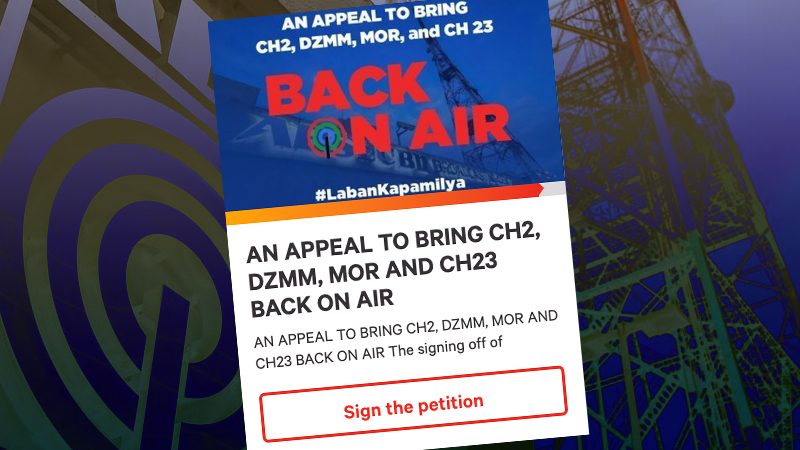 The petition comes days after ABS-CBN was forced to go off-air for the first time since Martial Law to comply with the National Telecommunications Commission’s (NTC) order to stop its television and radio operations on May 5.

To persuade government agencies to act on the matter, the petition appeals to the NTC, Supreme Court, and House of Representatives to bring back the television and radio operations of the embattled broadcast giant.

The petition specifically mentioned Channel 2, DZMM, MOR, and Channel 23–the network’s television and radio broadcasting arms, which were forced to shut down following the order. (READ: LIST: Where you can still access ABS-CBN content)

It called on NTC to withdraw its cease and desist order, pointing out how the shutdown is a “disservice to the Filipino people, especially at this time of crisis.”

It also urged the Supreme Court to uphold press freedom and stop the implementation of the cease and desist order.

ABS-CBN filed on May 7 a petition for certiorari and prohibition that asks the Supreme Court for a writ of preliminary injunction and a Temporary Restraining Order (TRO).

An injunction and TRO would halt the implementation of the cease and desist order, and would theoretically allow ABS-CBN to go back on-air.

It’s the House of Representatives, however, that plays a most crucial role since it is the institution mandated to renew ABS-CBN’s franchise. At least 9 bills seeking ABS-CBN’s franchise renewal are pending with the House, but it has dragged its feet in acting on any of them.

The change.org petition asked the House to resume deliberations to renew the ABS-CBN franchise.

“During the coronavirus pandemic, there should be free access to information, entertainment, and public service. Our appeal to bring Channel 2, DZMM, MOR and Channel 23 back on-air upholds the peoples’ right to information from which press freedom emanates,” it said.

The change.org petition now has more than 5,000 signatures as of Wednesday noon, May 13.

NUJP said the groups are planning to submit the petition both to Congress and the NTC.

Those who want to help ABS-CBN go back on air can sign the petition here. Filipinos may also take part in the campaign of Rappler’s civic engagement arm MovePH that seeks to hold representatives accountable and persuade them to act on the franchise renewal.

People can do so by tagging their representatives on social media and using the hashtag #CourageON.