Jun 2, 2020 8:45 AM PHT
Rappler.com
Facebook Twitter Copy URL
Copied
Defend UPLB warns that the bill has the potential to silence critics of the government. Take a stand and sign the petition to persuade Congress to drop the measure. 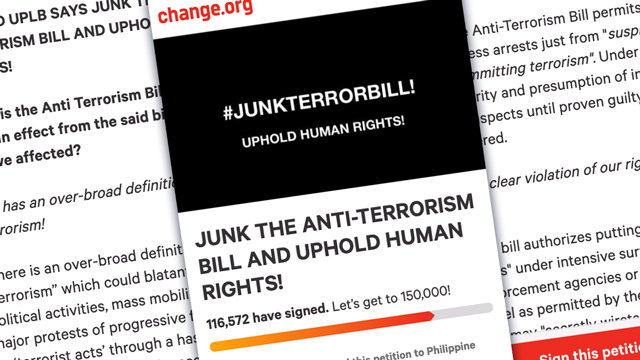 MANILA, Philippines – As Congress rushes to pass the anti-terrorism bill, thousands have called on the government to junk the proposed policy feared to clamp down on Filipinos’ basic freedoms.

Set up on May 29, a Change.org petition against the bill has garnered more than 116,000 signatures as of Monday afternoon, June 1.

Defend UPLB – an alliance of University of the Philippines Los Baños student councils, allied institutions, and member-organizations – led the petition in a bid to uphold human rights.

While the bill is packaged to strengthen systems to fight and catch terrorists, Defend UPLB warned that it has the potential to silence critics. (READ: ‘Dissent is duty, not crime’: Filipinos slam anti-terrorism bill)

Through the anti-terrorism bill, a council of top cabinet officials will be able to do functions usually reserved for the courts, such as warrantless arrests and detention of people and groups perceived to be terrorists.

Defend UPLB called this a violation of the Philippine Constitution, which states that the accused is presumed innocent until proven guilty beyond reasonable doubt.

A sentence equivalent to life imprisonment without parole can be given to persons who provide support to terrorists and recruit others to be members of a terrorist organization.

Over the past year, the government has increasingly “red-tagged” progressive groups as legal front organizations for the Communist Party of the Philippines and its guerrilla force, the New People’s Army. (READ: ‘Let this be our final warning’: UP CMC slams red-tagging students during pandemic)

How it can affect Filipinos

“Under this law, press freedom is a terrorist act,” Defend UPLB said in its petition. “It criminalizes advocacies and our right to organize in belief of our advocacies. Our academic freedom, right to organize, and freedom of expression can be labeled as terrorism.”

Defend UPLB added that the bill will enable the government to “silence any dissenter or organizer” and slammed the push for the measure “when the time calls for a health-based response to the pandemic.” (READ: UPLB alliance calls on school officials to protect students from red-tagging)

“These turbulent times call for the widest unity among individuals and communities in order to deny such a policy that can and will trample our human rights,” they asserted.

The House committee on public order and safety has recently adopted the Senate version, sparking suspicions of a possible railroading of the bill in Congress. Hardly a week later, Duterte has certified the anti-terrorism bill as urgent on June 1. (READ: Fears of losing freedoms escalate as Congress rushes to pass anti-terror bill)

To show your support to junk the anti-terrorism bill, make sure to sign this petition and invite your friends to take a stand.