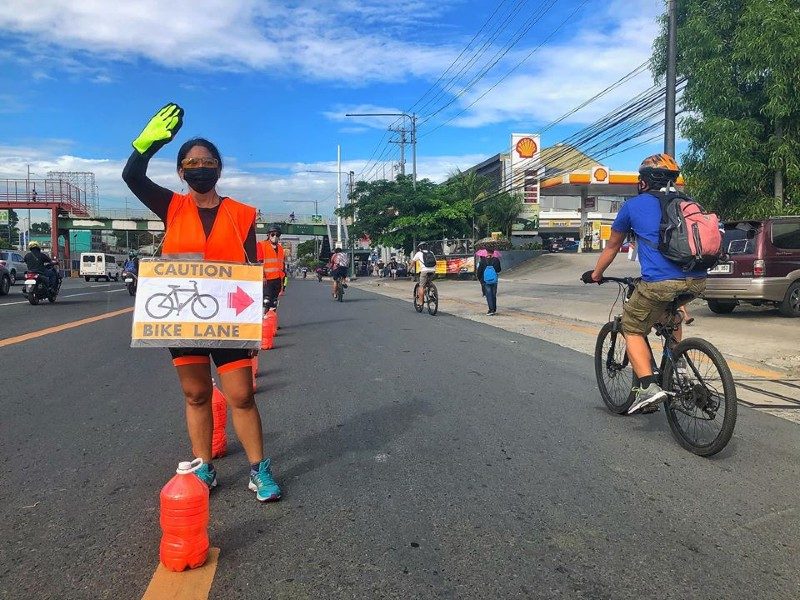 Facebook Twitter Copy URL
Copied
Advocates call for the continued protection of vulnerable road users, even if it means facing charges from MMDA

Despite the well-meaning intentions of the group, Metropolitan Manila Development Authority (MMDA) Spokesperson Celine Pialago criticized the initiative as unsafe for other bikers.

“There is no bike lane yet, and we cannot just put barricades there, especially one liter plastic containers. It is not safe for bikers because that is not enough to ensure their safety,” Pialago said.

The MMDA also said its officers had to remove the plastic bottles on Tuesday morning, June 2, after they were left unattended by the group.

This was refuted by Bike United Marshalls, saying that “the members of the Bikers United Marshalls are responsible citizens and they pack up the equipment at 8 am after their marshalling duties are over.”

The group also stood by their initiative.

“For bikers and frontliners to get hurt, it is sufficient that good people do nothing. We believe we have done our bikers (mostly without protective gear) our humble service. If the MMDA sees otherwise, then we have to be ready for the consequences of the incompetence of our leaders,” it said in a statement.

The spokeswoman said MMDA is already coordinating with the Philippine National Police to file charges against the group for “putting the lives of people in danger.”

To cope with the limited public transportation amid Metro Manila’s shift to GCQ, many Filipinos returning to work opted to use alternative modes of transportation such as bicycles and scooters.

In fact, anticipating the rise of bike commuters during the quarantine period, the MMDA even conducted a dry run for a bike lane on EDSA. (READ: On their own: Commuters and the looming transportation crisis in Metro Manila)

Yet contrary to reports and the optimistic traction this event gained online, the MMDA did not yet prioritize establishing bike lanes. Later, they announced that bikes are not yet allowed in EDSA.

Bikers United Marshalls said in their statement, “MMDA keeps on promising bicycle infrastructure and to hear them say that it will take time before they take action to protect bikers is utterly disappointing.”

As a result of this shift in priorities, on the first day of GCQ, commuters were either stranded on main roads or forced to walk because of the transportation crisis.

The group also clarified a number of claims made by MMDA about their initiative. For example, they said that the plastic bottles are not barricades. Instead, they served to “augment the already overwhelmed traffic enforcement personnel on the road.”

“Contrary to the allegation that our actions pose a danger to people, our actions as volunteer marshalls actually protect people… Doing nothing is more fatal. The group has also distributed hundreds of free reflectorized vests to help ensure the safety of bikers,” the group added, hitting the government’s lack of preparedness of public transport plans for workers.

Bikers United Marshalls is only one of the many communities of cycling enthusiasts in the Philippines advocating for safe and inclusive bike spaces.

Pialago said that it will take time implementing the long-term plans for bike lanes in the country. – Rappler.com