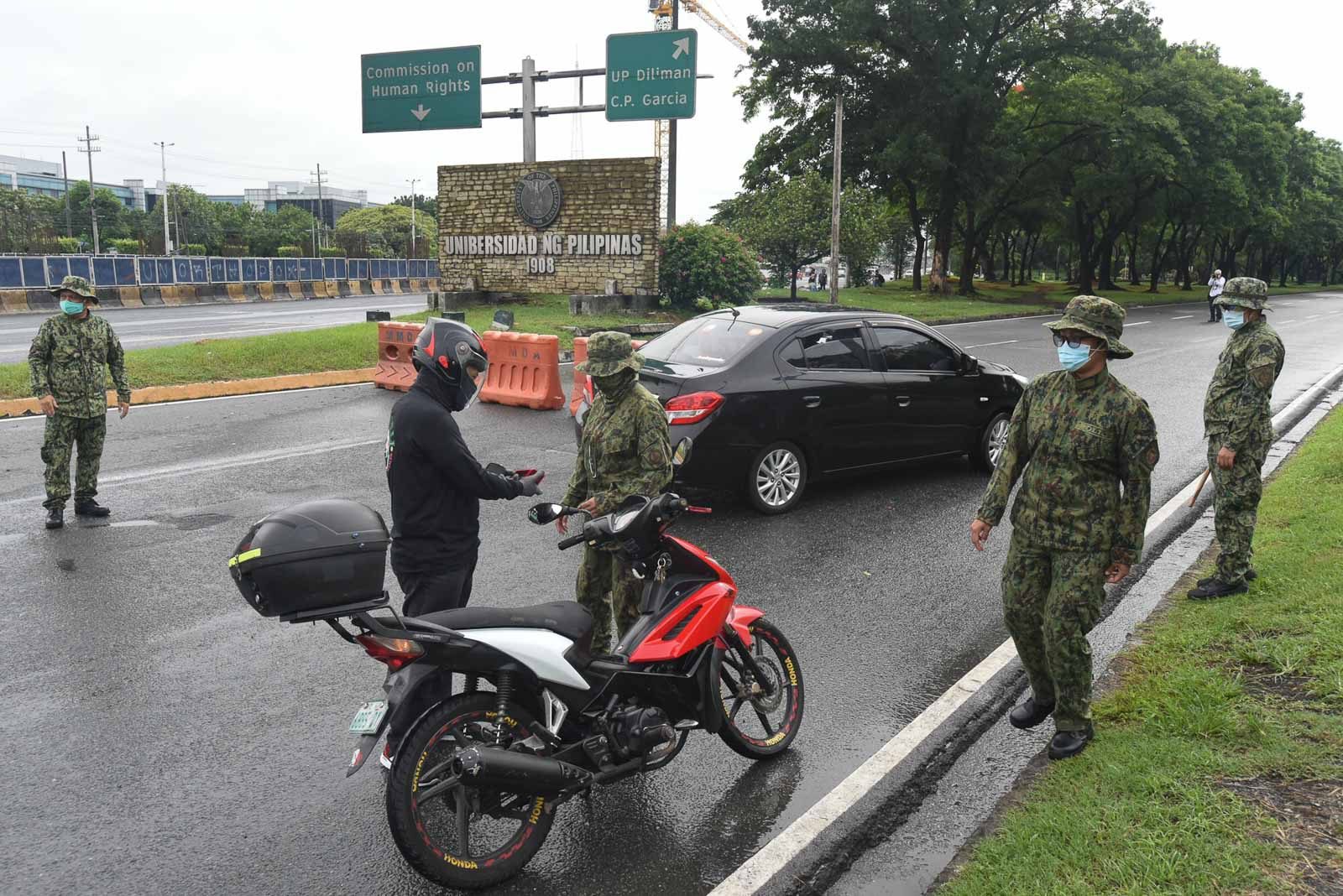 Facebook Twitter Copy URL
Copied
Although hundreds of individuals manage to take part in the protest in UP Diliman, other protesters were barred from entering the campus

MANILA, Philippines – Although hundreds of individuals were able to take part in the “grand mananita” themed indignation rally on Friday, June 12, other protesters were barred entering the protest site inside the University of the Philippines Diliman.

Ahead of the protest, police set up a checkpoint along Commonwealth Avenue going into UP. Quezon City Police Department (QCPD) officers were also seen in front of the Commission on Human Rights.

In a  Daily Guardian report, UP law student Meg Sandoval recounted in her Facebook post that she wasn’t able to join the mañanita protest after police blocked the entry points, preventing her and her companions from entering the protest site.

Their cars were not allowed to pass through and police didn’t give them an answer why they were denied entry.

Sandoval said that when she attempted to enter the gate again on foot, the police followed and stood in her way with hands outstretched to prevent her from walking further.

“My sister and I stopped about 50 yards away because our other companions could not get through. Several army police personnel surrounded them and then closed the main gate. They also blocked the pedestrian gate with their arms, getting too close to my friends and brother. Eventually my sister and I went outside to stay together with our companions,” Sandoval said.

Rappler contributor JC Punongbayan echoed this. In a Twitter post, he said that past 11 am on Friday, while the UP protest was ongoing, the police successfully blocked all entry via UPD’s Magsaysay Gate, beside Asian Center.

Under the Soto-Enrile accord of 1982, the Philippine National Police (PNP) and the Armed Forces of the Philippines (AFP) are barred from entering any of the UP campuses without prior permission from the administration or unless they are in hot pursuit of a crime suspect.

This is not the first time that police officers were seen inside the UP campus in a protest mobilization.

Over a week ago, 7 activists and one bystander were arrested in an indignation rally in UP Cebu. Police dispersed them and chased protesters inside the campus.

In that UP Cebu demonstration, police in anti-riot gear were seen on video manhandling protesters who were maintaining social distancing and assembling in front of university campus.  But in the rally held by supporters of the anti-terrorism bill on Independence Day, only a few policemen were deployed to the site.

In Iligan City, police arrested 16 students in an Independence Day rally against the anti-terror bill even if the students strictly observed physical distancing measures. Northern Mindanao police chief Brigadier General Rolando Anduyan said that the students were apprehended for violating quarantine rules at the Freedom Park of Iligan City.

In Tuguegarao City, Kabataan Partylist Cagayan Valley reported that youth activists staging a protest were threatened by the police that if they insisted on proceeding with the activity, they would be arrested.

For this year’s commemoration of the Philippines’ 122nd Independence Day, various groups held “mañanita” protests nationwide taking off from the widely criticized birthday celebration of National Capital Region Police Office chief Major General Debold Sinas, which was held during lockdown. Despite breaching quarantine protocols, Sinas kept his post after being defended by President Rodrigo Duterte himself.

On the eve of the Independence Day protests, the Department of Justice (DOJ) said rallies were “temporarily banned” during the pandemic for public health reasons. – Rappler.com