Jul 3, 2020 11:35 AM PHT
Facebook Twitter Copy URL
Copied
'We believe that all Filipinos who must stand for democracy against this bill that edges us closer and closer towards tyranny – in any way, shape, or form that is possible in spite of the pandemic,' says the #JunkTerrorBill group 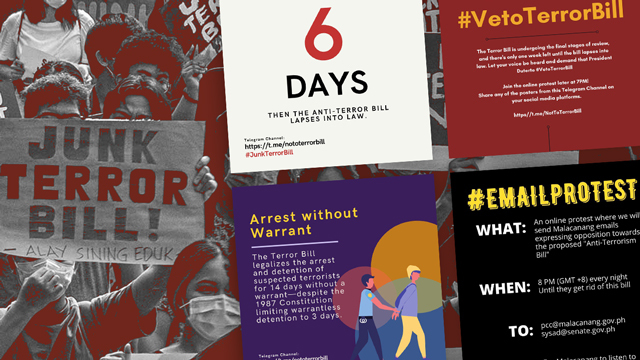 MANILA, Philippines – In less than a week, House Bill No. 6875 or the anti-terrorism bill will lapse into law, unless President Rodrigo Duterte signs or vetoes it before Thursday, July 9.

Various groups, personalities, and students are opposed to what they described as a “draconian” bill as it is seen to institutionalize abuse of power and would further curtail the right to freedom of expression once enacted into law. Critics of the bill suggested that the government should focus on providing aid to those affected by the cononarvirus pandemic instead. (READ: [ANALYSIS] The Anti-Terrorism Act: Duterte will have all dissenters’ necks)

At a time when physical gatherings are discouraged due to the pandemic, what can Filipinos do to express their opposition to the bill?

A non-partisan group of protesters, who remain anonymous, has formed a #JunkTerrorBill Telegram channel where they can connect with other groups opposed to the anti-terror bill.

“We do not believe there is One Leader to the movement; we work as one in opposition of this bill. We believe that all Filipinos who must stand for democracy against this bill that edges us closer and closer towards tyranny – in any way, shape, or form that is possible in spite of the pandemic,” the #JunkTerrorBill group said.

They have come up with an organic online protest that aims to exert public pressure on the government against the passage of the bill.

The group behind the #JunkTerrorBill email protest pointed out that they oppose the bill on the grounds of its unconstitutionality. They also said they are doing this protest because of their “distrust in this administration, which has done nothing but abuse and fail the Filipino people.”

They said they are hopeful that something will come out of the initiative. And even if the bill is signed into law, the group said they would not relent in protesting against the measure.

“We hope that our current protests to Malacañang and DOJ are heard as well, and we are ready to make our voices heard should this bill be signed into law,” the group said.

Here’s how you can join their email protest:

Step 1. Check the directory for the email addresses of the DOJ and Malacañang officials

To make the protest impactful, you may CC all of the email addresses on the list.

In composing your email, make sure to use the recommended subject lines or any of their variations:

You may also personalize the subject line as long as it is related to the recommended list.

For the body of the email, you may voice out your concerns regarding the anti-terror bill – how your freedom could be challenged if bill is signed into law.  You may also point out how you think the bill is unconstitutional by citing the 1987 Constitution.

Step 3. Urge friends, groups, and influencers to join the campaign

There is power in numbers! Inform your friends and relatives who share your concern about how they can join the email protest. You may also post the instructions or share this article on your social media accounts to further amplify the cause.

You may also encourage institutions and organizations to take a stand against the bill and ask community leaders, celebrities, or influencers, to use their platforms to keep the spotlight on the issue.