Jul 4, 2020 4:36 PM PHT
Jene-Anne Pangue
Facebook Twitter Copy URL
Copied
'The law aims to end terrorism, it says, yet it is the state forces that perpetrate fear and violence on the people,' says former human rights commissioner Loretta Ann Rosales in an online protest joined by other sectoral leaders 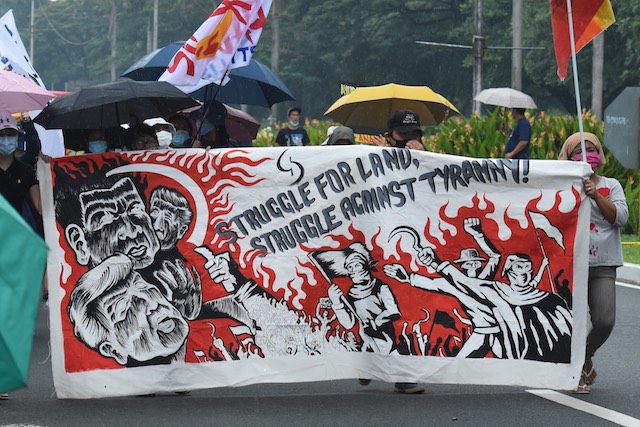 MANILA, Philippines – Representatives from various sectoral groups came together in an online protest on Saturday, July 4, to denounce the anti-terror law signed by President Rodrigo Duterte despite public clamor against the controversial measure.

Former Commission on Human Rights chairperson Loretta Ann Rosales pointed out that instead of listening to the call of the people, the government has prioritized silencing them, especially its critics.

“The law aims to end terrorism, it says, yet it is the state forces that perpetrate fear and violence on the people,” Rosales said.

She also argued that the law legalizes the suppression of human rights and degradation of democratic governance.

“Democracy is founded on the foundation of separation of powers and checks and balances of these 3 branches of the government. But with Duterte’s anti-terror law, the Executive has monopolized and taken over the function and control of Congress and taken over the function of the Court to identify who are the terrorists, and to explain what terrorism is all about,” Rosales added.

Now that the anti-terror bill has been signed into into law, Rosales joined the calls to repeal it.

“This runs contrary to the rights enshrined in our Consitution and for this reason, the SC must declare it unconstitutional when we file a petition [to challenge the law]. The court now holds the duty to uphold the rule of law and maintain its freedom from the Executive. Akbayan will continue its opposition to the terror law in the courts and in the streets,” said Rosales, who is Akbayan chairperson emeritus.

She added that Akbayan and other sectoral groups are united to fight the anti-terror law and are once again “ready to fight for civil rights and defend democracy.” (READ:‘We will not be silenced’: Campus press denounce signing of anti-terror law)

“If the Duterte administration intends to stay in power without opposition, history will prove them wrong. They will not succeed,” Rosales said, citing the fate of the late strongman Ferdinand Marcos

She also urged lawmakers who retracted their vote in favor of the bill to lead in the petition for a repeal of the law. (READ: Critics ready to petition vs anti-terror bill – and Carpio is one of them)

Soliman also shared the sentiment of other groups that the government should instead focus its efforts on responding to the coronavirus pandemic.

(They still need to address other matters especially in the areas of health, helping the hungry, and matters concerning the economy. [The law] is a curtailment of our rights to criticize or point out things that they did wrong.)

Activist and former senatorial candidate Samira Gutoc also joined the protest. She called out the Duterte government for its misplaced priorities and for its lack of urgency in responding to the needs of Mindanaoans affected by the Marawi siege until now.

“We are deeply disturbed by the lack of justice, sense of fairness, sense of compassion by a government that committed a rehabilitation program [for Marawi],” Gutoc said.

(Here in Marawi City, we are continuously waiting, after 1,200 days since the siege, for a true reintegration and rehabilitation [program]. The administration prioritized the anti-terror bill without first doing an accounting, inventory and auditing of what happened to the three martial laws [extensions] in Mindanao.)

Several groups are expected to challenged the anti-terror law before the Supreme Court, the first petition filed by a group of lawyers and civic leaders, including Howie Calleja and Brother Armin Luistro on Saturday. – Rappler.com