Jul 5, 2020 4:48 PM PHT
Rappler.com
Facebook Twitter Copy URL
Copied
Groups stress the possible ramifications of the Anti-Terrorism Law on mass mobilizations in light of the violent arrest of Cabuyao 11. Three minors from the protest have been released to their guardians, while 8 are still detained. 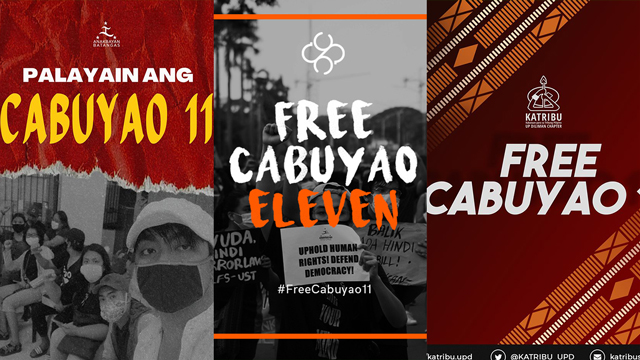 MANILA, Philippines – Several groups demanded for the immediate release of 8 of the 11 activists in Laguna who were arrested on Saturday, July 4, following their protest against President Duterte’s signing of the Anti-Terrorism Law.

Karapatan Timog Katagalugan said that 3 minors from the protest have been released to their guardians, while 8 are still detained.

Among those arrested were members of rights groups Karapatan, Anakbayan Southern Tagalog, and other progressive groups, including a student and 2 alumni from University of the Philippines Los Baños (UPLB).

The protesters had just concluded their program when cops apprehended them, with activists being forcibly dragged to the Cabuyao City Police Station based on a video posted by Anakbayan Southern Tagalog.

The protesters had been wearing masks and following physical distancing during their program.

Karapatan Timog Katagalugan said that Cabuyao Police Chief Reycon Garduque is still contemplating on the charges to be filed against the protesters, as of Sunday, July 5.

Several groups decried the arrest, with Gabriela warning how the passage of the Anti-Terrorism Law will only “worsen human rights violations and state terrorism against the Filipino people who are demanding pro-people state actions such as free mass COVID-19 testing, economic amelioration, social protection and respect for human rights in the face of the COVID-19 crisis.”

The UP College of Science Student Council stressed the possible ramifications of the Anti-Terrorism Law on mass mobilizations in light of the detention of protesters dubbed the Cabuyao 11, who had practiced physical distancing and worn masks yet were subjected to a violent arrest.

“Not even 24 hours after the ATB was signed, state forces are already harassing everyday citizens exercising their legal right to protest. In their haste to silence criticism, it is clear that the administration fears the power of mass mobilization,” they said.

Kabataan para sa Tribung Filipino-UP Diliman chapter raised the same concern, highlighting how everyone is entitled to express their dissent as mandated by the Philippine Constitution.

(The ability to mobilize and air out our thoughts are rights stated in our Constitution. What’s happening now proves that authorities will abuse their powers to silence people who are truly fighting for the rights of all.)

Bahaghari National slammed the rising trend of police-instigated violence and attacks against people’s peaceful protest “in the name of enforcing invented and unlawful lockdown restrictions.”

Just recently, at least 20 people at a Pride march in Mendiola, Manila were arrested despite observing physical distancing and other health protocols.

In Cebu, at least 8 were arrested at an anti-terror bill rally near UP Cebu that was staged after the then anti-terror bill hurdled  Congress. Although the rally had been peaceful, protesters were met by Cebu City police in combat gear and members of the SWAT team.

Videos showed cops, some in plain clothes, entering the UP Cebu campus and chasing down students following the dispersal.

“In these violent confrontations, it was not activists who violate health protocols and human rights, but state authorities who manhandle participants. This impunity and brutality must end. The people have every reason to rise up against Duterte’s terrorism,” said Bahaghari National.

Bahaghari vehemently condemns the violent dispersal and arrests of activists, workers, and human rights defenders participating in the protest against the Terror Law in Cabuyao, Laguna.#FreeCabuyao11 #JunkTerrorLaw pic.twitter.com/zUA8tr9qLn

Anakbayan Batangas lamented how the Anti-Terrorism Law had only been signed for a day yet police abuses have cropped up left and right. They urged others to continue to pressure the government to drop the measure and called for the release of the 11 who were detained during the recent anti-terror protest.

(This is just the start of the abuses that they will inflict with their newfound powers. Let’s continue to rattle the government to junk the Anti-Terror Law. This law only protects the powerful. The activists are not the enemies, and the citizens are definitely not terrorists.)

Rallying support behind those arrested, the UPLB University Student Council called on UPLB Chancellor Fernando Sanchez Jr to support and amplify their call to free Cabuyao 11.

In an open letter to the chancellor, the student council asserted the arrest of Cabuyao 11 was a “clear demonstration of how our own state forces abuse their power over dissenters expressing their critics to the current administration.”

“There is undeniably nothing wrong with protesting for our civil rights,” UPLB University Student Council added.

The student council urged the chancellor to side with the students and alumni who speak against abuses and oppression, and highlighted how UP students must “live up to the standards of being informed and educated about these issues.”

They also requested the UPLB administration to open the campus to the public, now that Laguna is under modified general community quarantine.

The UPLB University Student Council said by opening the campus to the public, there would be more free public spaces which people can use to air out and express their sentiments, calls and advocacies without the fear of being arrested, harassed or harmed.

“Given the current social and political environment in our country, it is very important that the students and the youth have a safe space,” they explained.

UP Diliman is currently open to the public, with peaceful protests being held in campus without military and state interference. (READ: Filipinos take to the streets to protest against anti-terrorism law)

Karapatan Timog Katagalugan said that the police is still keen to press charges against the 11 activists.

Those interested to help may refer to the details below: