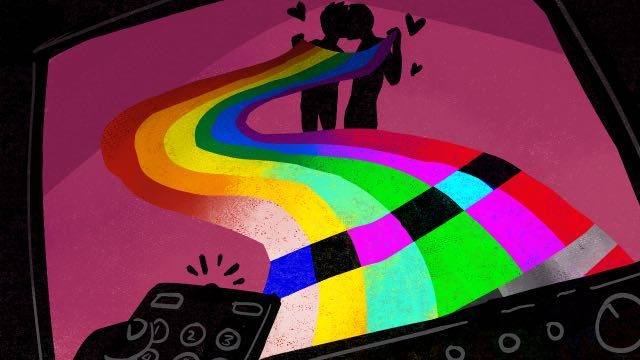 I have seen efforts by film producers and writers to veer away from the parloristang bakla narrative, where gays are portrayed as comic relief just starving for the male species. However, when it comes to BL series, how gay characters are depicted there poses another challenge. They are presented as eye candy, with masculine features and fit bodies, charming male leads without a trace of body fat or effeminacy. This poses a problem, as young LGBT viewers could then view themselves as “too ugly to be gay,” or worse, believe that they do not deserve the same “love” because of their appearance. (READ: ‘Tolerated, but not accepted’: Filipino LGBTQ+ speak up vs discrimination)

I taught media and communication for a year at a Dominican-run Catholic institution before transferring to the blue Jesuit school. As a partial requirement, I instructed my students from the Dominican school to create a short film about a social or political issue. I stressed the importance of media representation, that it was better for them to create stories on the lives of the least represented.

In 2019, one of the student-made films, Hanggang Dulo, bagged awards in an intra-school student film competition. The film was not perfect. It had its flaws. But I said to my students that what mattered more was that they lent a voice to the least represented in the society. In the film, they shared how young LGBT members cope in relationships where one partner is born with HIV. (READ: What LGBT kids need to hear)

After winning Best Picture, I gave my students the go-signal to publish their film on YouTube. I was usually hesitant to let students post their films on the internet as I wanted to reduce digital footprints and not be held accountable for their works. However, their film was an exception, as I wanted more people not only to watch it, but also spread its message – to end the stigma towards people living with HIV/AIDS, and to get tested. As of writing, the video garnered 750,000+ views and more than a thousand comments on YouTube. Not bad for a student-made film.

However, one of my colleagues remarked that the films submitted by my students were “hindi pang-hayskul” (not suited for high school students). She might have been echoing former MTRCB chair Marissa LaGuardia’s classification of homsexuality as “an abnormality of nature.” She also pointed out how some of my students were even minors. She said that they might be too young to comprehend issues like same-sex relationships, rape, and even death as subjects of films. I understood her concern, because I was still bound to the rules and norms of a Catholic institution. However, I remained firm with my philosophy to be more liberal, while teaching my students to be ethical content producers, and not to be exploitative in their own writings.

Communication theorist George Gerbner argues that “the more time people spend ‘living’ in the television world, the more likely they are to believe social reality aligns with reality portrayed on television.” Although Gerbner’s cultivation theory is debunked by most theorists, as most audiences have shifted from getting information on TV to getting it on the internet, content producers of Pinoy BL series still have a responsibility to be more inclusive.

My cis female cousin who is a ‘BrightWin,’ or a fan of 2gether’s main actors, asked me to recommend similar series, and I shared with her one of the Thai series I admired, Diary of Tootsie. My cousin watched a few episodes and was lukewarm towards it. She said that some characters from Diary of Tootsie were not as “visually pleasing” as 2gether’s Bright Vachirawit or Win Metawin.

I hope that Pinoy BL series go beyond this hype, serving a greater purpose and injecting pressing social and political realities. Who knows? The next Pinoy BL series might feature a gay character who is plump (or in LGBT lingo, a “chub”) or an “effem” person with a disability. – Rappler.com

Patrick Ernest C. Celso, 23, is a licensed professional teacher from Makati City. He teaches media and communication at Ateneo de Manila University. He is finishing his graduate degree in Creative Writing and obtained an English Education degree at the University of Santo Tomas.