Jul 20, 2013 9:32 AM PHT
Rappler.com
Facebook Twitter Copy URL
Copied
Know the formal steps in the budget process. Beyond them, learn about the informal ways of lobbying. MANILA, Philippines – When we think of the national budget, we think of huge tomes filled with columns of boring numbers that few people would ever bother reading.

Yet boring as they may seem to most of us, those numbers affect many lives.

The budget after all governs the use of scarce national resources. It spells the difference between empty platitudes and promises, and actual programs on the ground.

Properly crafted, the budget could prevent mothers from dying from childbirth. It could determine whether or not a child living in a far-flung province will be able to read, write and move on to a brighter future.

It could prevent countless poor families from going hungry.

Yet since the yearly process of crafting this all-important document is far too daunting to many ordinary folk, few people care to be involved in it.

In many ways, the budget process is similar to that popular childhood boardgame, Slides and Ladders.

We deconstructed the budget formulation and approval process, talked to groups that have gotten involved and gotten their pet programs through and — based on their experiences and pointers given by government officials involved — we identified the areas that allow citizen participation and engagement.

The board game reflects the formal steps in the budget process itself. But it also identifies informal scenarios that can help you further your cause, including government offices you need to coordinate with.

Steps in the process and scenarios that facilitate the approval of budget recommendations serve as ladders, while circumstances that either delay or get a budget proposal axed are marked with slides. In the board game illustrated below, winning equates with getting a pet advocacy funded.

A good timetable to base your campaign plan on would be the 2013 and the 2014 timetables. In the board game, the spaces between boxes reflect the approximate amount of time the process takes at a particular level.

Hover over the boxes to view pop-ups explaining what happens at every stage of the process and to get tips on how to further your cause.

We include the 2013 timetable because in that year, the national budget made it through the executive and legislative processes on time, or within the same calendar year.

In our conversations and interviews with civil society and non-government organizations, they highlight these 4 important tips for engagement:

Begin at number 1, when the budget department issues the budget call, and move from one number to the next until you end with number 95, the point where the President signs the budget into law. – with research by Bon Cabiles and Gemma Bagayaua-Mendoza/ Rappler.com 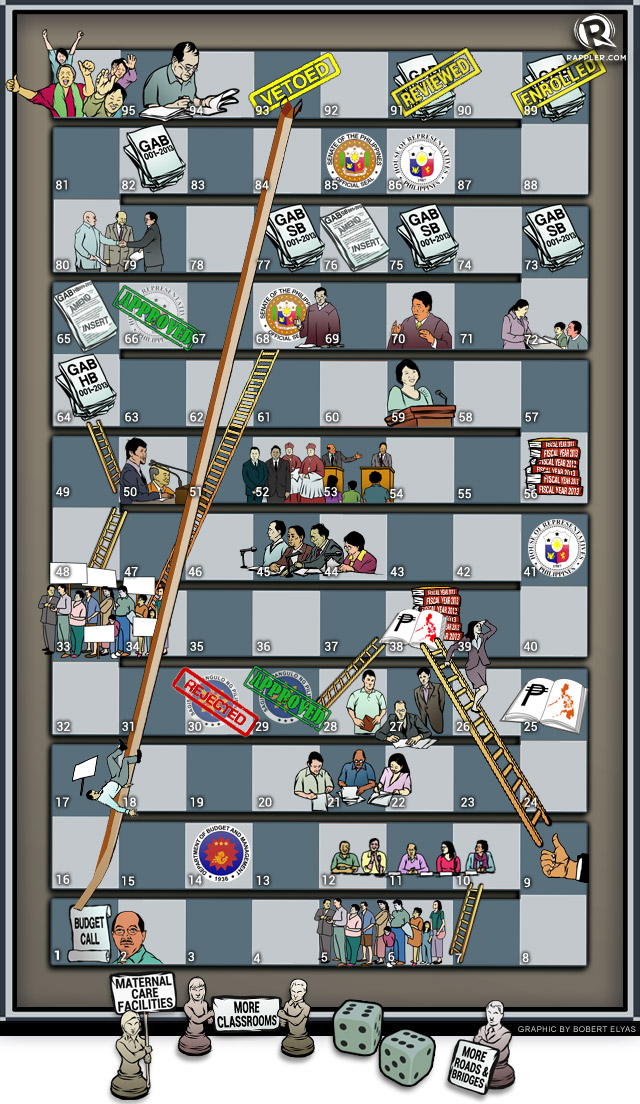