II – Jesus takes up his cross

Second Station of the Cross
JESUS TAKES UP HIS CROSS

V/. We adore you, O Christ, and we bless you
R/. Because by your holy cross you have redeemed the world

“When the chief priests and the officers saw him, they cried out, ‘Crucify him, crucify him!’ Pilate said to them, ‘Take him yourselves and crucify him, for I find no crime in him.’ The Jews answered him, ‘We have a law, and by that law he ought to die, because he has made himself the Son of God.’ (…)

“Then (Pilate) handed him over to them to be crucified. So they took Jesus, and he went out, bearing his cross, to the place called the place of the skull, which is called in Hebrew Golgotha.” (Jn 19: 6-7, 16-17) 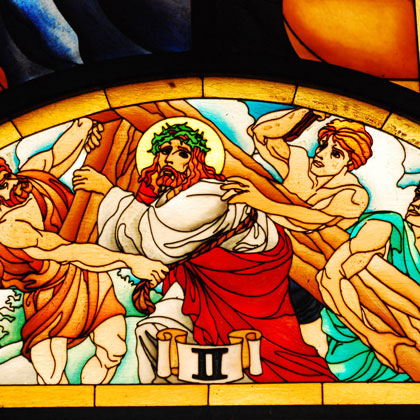 Pilate’s giving in to the crowd’s unjust demand leads to Jesus’ death.
Some of our decisions also lead to other people’s misfortune. Whose lives do we affect – for better or for worse – whenever we make decisions?
Let us pray for the grace not to remain blind “to the outstretched hand of the poor and needy, which begs for a hearing and asks for help.”
Reflections adapted from a Way of the Cross version posted by the Vatican’s Office for the Liturgical Celebrations of the Supreme Pontiff, as written by Sr Maria Rita Piccione, OSA, president of the Our Lady of Good Counsel Federation of Augustinian Monasteries in Italy.