XI – Jesus is nailed to the cross

Eleventh Station of the Cross
JESUS IS NAILED TO THE CROSS 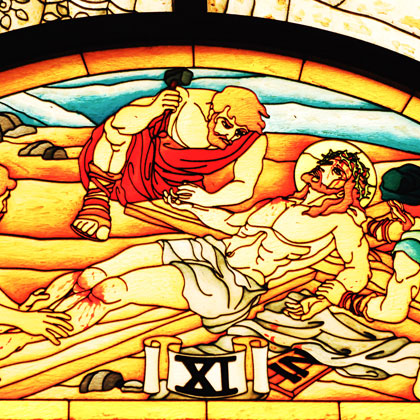 Jesus’ crucifixion is a message that he doesn’t reign with worldly might but with “the love of the Father who gives himself for us, in the Son, ‘to the infinite end.’”
What things or experiences do we sometimes consider the kings of our lives? How do we contrast these with Christ the King?
Let us pray for the grace “to always choose ‘God and his will over the interests of the world and its powers.’”
Reflections adapted from a Way of the Cross version posted by the Vatican’s Office for the Liturgical Celebrations of the Supreme Pontiff, as written by Sr Maria Rita Piccione, OSA, president of the Our Lady of Good Counsel Federation of Augustinian Monasteries in Italy.