From the Holy Gospel according to John:

“The soldiers came and broke the legs of the first, and of the other who had been crucified with him; but when they came to Jesus and saw that he was already dead, they did not break his legs. But one of the soldiers pierced his side with a spear, and at once there came out blood and water. He who saw it has borne witness – his testimony is true, and he knows that he tells the truth – that you also may believe. After this Joseph of Arimathea, who was a disciple of Jesus, but secretly, for fear of the Jews, asked Pilate that he might take away the body of Jesus, and Pilate gave him leave. So he came and took away his body.” (Jn 19: 32-35, 38) 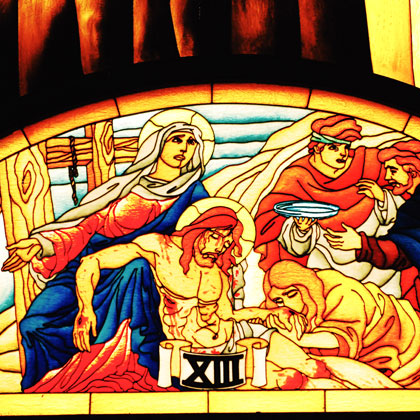 Embracing Jesus who was taken down from the cross, Mary shows an example of “devotion to the ‘yes’ of love,” surrender, acceptance, trust, practical concern, and a tender heart.
What circumstances invite us to exhibit the same virtues?
Let us pray for the Holy Spirit’s guidance, as the Holy Spirit guided Mary, “by the radiant gratuity of the love ‘poured forth from God into our hearts by the gift of (his) presence!’”
Reflections adapted from the latest Way of the Cross version posted by the Vatican’s Office for the Liturgical Celebrations of the Supreme Pontiff, as written by Sr Maria Rita Piccione, OSA, president of the Our Lady of Good Counsel Federation of Augustinian Monasteries in Italy.