Mar 30, 2012 11:00 PM PHT
Facebook Twitter Copy URL
Copied
During this Easter season, let us live the life of Christ. Let us rise with him from the tombs of our sin and misery. Christ lives in us. 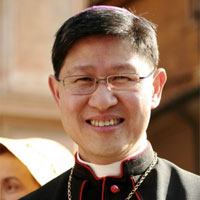 Friends, today we rejoice in the solemnity of the resurrection of the Lord. Catechism says it is the crowning truth of our faith in Christ, hence we constantly need to refresh our understanding of this great mystery of faith.

The resurrection has always been held as the central truth in the first christian communities until now. In fact it has been handed on as fundamental by the tradition of the church, established by the New Testament and preached as an essential part of Christ’s pascal mystery.

We can say that the Resurrection is both a historical and transcendent event. And absolutely a work of the holy trinity.

Brothers and sisters, first let us be clear, the Resurrection is a real event. The manifestations of the risen Lord are historically established as the New Testament testifies. In fact, about the year 56 A.D. the apostle Paul has already written to the Corinthians about it.

There are many elements in the Resurrection worth mentioning. The first one is the empty tomb that is considered an essential sign for all. Its discovery by the disciples was the first step in recognizing the truth of the Resurrection.

The disciple whom Jesus loved confirmed the mystery when he saw and believed. This leads us to the realization that the absence of Jesus’ body would not have been of human doing. Jesus would not have simply returned to earthly life as in the case of Lazarus.

Aside from the empty tomb and the linen clothes lying there, the risen Christ had many apparitions as attested to by many of his disciples.

The first to encounter him were Mary Magdalene and the other holy women, who became the first messengers of the good news of the Resurrection.

Then he appeared to Peter and the 12. And the catechism says they remain the foundation stones of His Church.

But they are not the only people who have encountered the risen one. Paul has spoken clearly of more than 500 persons to whom he appeared to in a single occasion; and also of James and all the apostles.

Thus, the Resurrection, with all the testimonies written in these scripture and those handed on in tradition is certainly a historical fact.

And while some people doubt it, we need to remember that even those who were close to Jesus had their doubts too. One famous incident of doubt conquered by faith is the experience of Thomas. By means of touch and the sharing of a meal, the risen Christ established direct contact with his friends.

He is not a ghost! His is the same body that had been tortured and crucified but not possesses the new properties of a glorious body. His resurrection was not a return to earthly life, like that of Jairus’ daughter or Lazarus and the others.

In his resurrection, the Holy Spirit filled him. And so he shares the divine life and is called by Paul as the man of heaven.

But you might say, “Cardinal, no one can say how it came about physically.”

Aha, turn to the catechism that says the Resurrection was an historical event that could be verified by the sign of the empty tomb and by the reality of the apostles’ encounter with the Risen Christ. It transcends and surpasses history.

The Resurrection is an object of faith. It is a transcendent intervention of God Himself in creation and history.

In the Resurrection, the three persons of the Holy Trinity act together as one. The Father’s power raised up Jesus, his son. And he is revealed as the Son of God, according to the Spirit.

My friends, I hope we always bear in mind the following:

So dear friends, Jesus died for us. He rose from the dead for us. During this Easter season, let us live the life of Christ. Let us rise with him from the tombs of our sin and misery. Christ lives in us. – Rappler.com