Syria and the just war theory The idea that certain wars are just and morally called for has its origin in the writings of Christian saints.

St Thomas Aquinas understood the consequences of non-intervention when he asserted that “those who wage wars justly have peace as the object of their intention.”

Even centuries earlier, St Augustine already defined just wars — that “which avenge injuries, when the nation or city against which warlike action is to be directed has neglected either to punish wrongs committed by its own citizens or to restore what has been unjustly taken by it.“

A responsibility to protect

The rhetoric employed by 21st century proponents of armed intervention on humanitarian grounds has become more sophisticated but it follows the same logic.

Where there is state failure to protect the lives of its citizens by virtue of the state itself being the perpetrator of harm, the international community steps in.

This principle, known in geopolitics as the Responsibility to Protect (R2P), has been debated over the years in an attempt to concretize what sorts of “injustices” create a “moral imperative” to go to war.

Foremost of these injustices that call for some form of military action are genocide and war crimes — what US President Barack Obama calls the “red line” which no country must cross.

If US intelligence reports are to be believed, Syrian President Bashar al-Assad crossed this line by allegedly launching chemical attacks exclusively on rebel-controlled areas of his country.

READ: The Crisis in Syria

If the same reports are to be believed, those attacks are likely to be repeated as the Assad regime “maintains a stockpile of chemical agents.”

R2P, however, is concerned primarily with the motive and morality behind waging a war rather than the conduct of the war itself.

Beyond intent, there are many dimensions to a war that demand careful deliberation if only to assure that human suffering is significantly lessened after (and because of) winning the war.

Is the princinple of civilian immunity respected in the forms of warfare employed? Is there a reasonable chance of success in winning the war in terms of capacity and public support relative to the enemy’s? What rehabilitative efforts would be in place post-war?

Most of all, is the call to war simply a knee-jerk reaction of someone who feels compelled to do something in response to massive human suffering? Or is it the only possible resort to end the massive loss of human lives?

By not going to war, are we guilty of tolerating Assad’s deplorable chemical warfare? 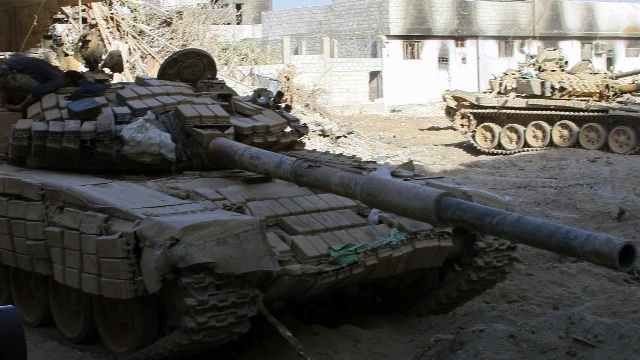 What is feared by proponents of war is the message that non-intervention will send to rogue states: that the West will stand by idly in the face of inhumane tactics of repression employed by megalomaniac dictators.

Non-intervention will embolden countries like Iran and North Korea to pursue weapons of mass destruction knowing that there are no consequences to these actions.

On the flipside, anti-war advocates say the call for military strikes in Syria is “ill-conceived,” only serving to project US military power in the Middle East instead of being motivated by a “responsibility to protect.”

Since crossing the “red line” (representing international norms) is cited as the reason for a military strike, the conduct of that strike must not cross any sort of “red line” as well.

Foremost among the principles to be considered for a military strike is multilateralism — when the waging of war is done not solely by a single country and is ideally led by the United Nations Security Council (UNSC) or at least multiple states willing to form a coalition.

The basis for an attack must also be the UN-led investigation, instead of intelligence reports alone sponsored by a single government.

This way, there is reasonable assurance that the war was waged as a collaborative effort of many to protect the Syrian people and was not simply carried out in the interest of a specific government.

The Washington Post already reported that Russia — the country alongside China that walked out of UNSC talks over plans to strike Syria — “doesn’t exclude” the possibility of an intervention should there be “overwhelming evidence” approved by the UN.

With all its geopolitical underpinnings, the crisis in Syria is still very much rooted in local sectarian divides. It is a battle to be won by the rest of the world, as it is a battle of the Syrian people.

Of utmost consideration must be the welfare of the locals.

Who will govern them after the war when the cruise missile attacks have been launched and the perpetrators of injustice have been punished? Is this person or group better than the old regime?

It is ironic that we live in a world where the road to peace is one that is paved with violence.

Amidst all the talk about a possible strike against Syria, addressing the humanitarian needs of refugees in neighboring countries must not be forgotten. The spill-over effect of war creates crisis in the region.

The challenge for the West is to act multilaterally with a military strategy working within the framework of a “just war.”

Whether that is at all possible is another story. – Rappler.com

Buena Bernal writes development stories for Rappler. You can follow her @buenabernal.