Oct 3, 2013 7:53 AM PHT
Buena Bernal
Facebook Twitter Copy URL
Copied
Here's what you need to know about the #ScrapPork protest on Ayala Avenue on Friday, October 4 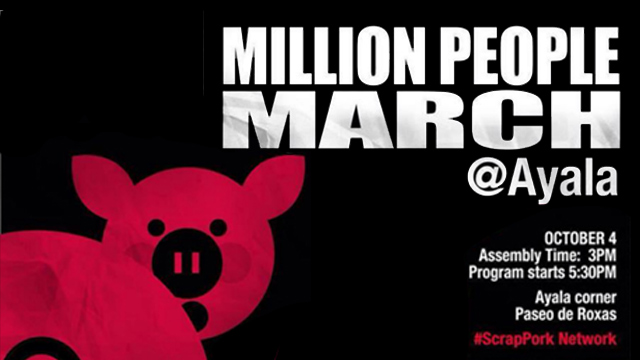 MANILA, Philippines – The demands will be clear.

On Friday, October 4, groups and individuals supporting the abolition of all forms of pork barrel funds will gather at the foot of the Ninoy Aquino bronze monument on Ayala Avenue in Makati City.

Patricia Tan, spokesperson of the #ScrapPork network, said concrete calls for action and specific policy recommendations to address the sustained patronage politics in the country will be presented on Friday.

“Pork is not just discretionary. It’s a fund that is used primarily to influence votes,” she said, adding that any form of pork barrel is prone to misuse.

Tan explained that the proposed line-item budgeting of the Aquino administration simply lessens the discretion of lawmakers on the use of government funds but does not prevent them from using the funds in the first place and using them to their advantage.

Unlike the #MillionPeopleMarch held in Luneta last August 26, the Ayala protest will follow a program expected to end by 8 pm.

The program is meant mostly to empower the participating protesters with information, with talks on the basics of pork barrel funds and the status of the 2014 budget deliberations.

Leonor Briones and Lidy Nakpil are set to deliver speeches during the program.

Performances by Daryl Shy, Lolita Carbon, Arnel Ignacio, The Jerks, Cookie Chua, and other artists supporting the cause will also be integrated in between talks.

At 7 pm, a noise barrage will be held, together with a candle-lighting ceremony. The “Ingay ng Liwanag (Noise of Enlightenment)” will symbolize the protesters’ desire to be heard by government.

The Makati City Public Safety Department (PSD) already circulated a traffic rerouting scheme that will be implemented starting 2 pm on the day of the protest.

Motorists from McKinley Road will be allowed to enter Arnaiz Ave and turn right to Paseo De Roxas toward their respective destinations in the city’s central business district.

As for private vehicles bound for Salcedo Village in the city, drivers can pass Ayala Ave then make a right turn to Apartment Ridge, turn left to Sta Potenciana, and turn left again to Paseo De Roxas toward their destinations.

In its public announcement, the Makati City PSD asked for the public’s full cooperation to avoid a traffic jam.

Tan, a marketing specialist, acknowledged that not much has changed in the structure of the original group that initiated the Luneta picnic-rally.

“It’s a fluid network, and there is no hierarchy. We work by consensus,” she said.

The spokesperson relayed how the movement started, with initiators simply introducing themselves to each other online.

“Being somebody who’s not a veteran of the streets, I was pretty apprehensive at first,” she said, adding that she eventually appreciated how multiple groups of different ideologies came together for a single cause.

WATCH: Groups come together for #MillionPeopleMarch

On Thursday, October 2, volunteers of the #ScrapPork network marched from a Makati mall to the Ayala train station to encourage others to join the Friday march.

The volunteers consist of concerned individuals – bloggers, lawyers, IT professionals, freelance writers and photographers, social entrepreneurs – who started to know each other only during the #ScrapPork network meetings. While she acknowledged that there were rallyists during the first #MillionPeopleMarch at Luneta who were simply fed up with the system but had no alternatives to propose, she explained that the Ayala protest now seeks to put flesh to the group’s rhetoric.

Members of the #ScrapPork network met for two days and invited individuals who were familiar with the budget deliberation process to speak to the group.

After themselves being briefed, members and member-groups of the network who were of different backgrounds and political leanings were able to consolidate their demands.

The problem, explained Tan, with the current auditing process is its singular focus on the finance aspect of a government project.

“Does the road exist? Is it reasonably priced? But it doesn’t answer the question of why. Why that road? Why there?” she said, adding that the government should also explain its system of selection, prioritization, and implementation of projects.

Among the calls for action to be issued by the network on Friday is the establishment of a citizen-led audit to complement the efforts of the Commission on Audit, much like how the official vote count of the Commisson on Elections is complemented by a citizens’ monitoring arm. – Rappler.com