Oct 12, 2013 10:43 PM PHT
Nina Somera
Facebook Twitter Copy URL
Copied
Instead of quick-fixes, we need to look again at the more practical interventions grounded in our own contexts and histories Typhoon or no typhoon, the poor’s access to rice remains a daily struggle.

But what if they are given rations or relief goods which include genetically engineered food, whose safety is still questioned by many? Will they feel better? Or will they also feel less as human beings?

Said to have betacarotene that can combat Vitamin A deficiency – a condition which results to vulnerability to infections, poor vision or even blindness – Golden Rice is now being promoted as rice for the poor.

Yet its humanitarian approach is marked by telling concerns, contradictions, and compromises. READ: Golden rice: The next GMO battleground

One key concern over Golden Rice lies in its being a product of genetic engineering, which involves the insertion of genetic material from one organism to another, a process which would not occur naturally.

In the case of Golden Rice, the process forces a cross between rice, altering the constitution of Oryza sativa, the genus of rice commonly eaten in Asia.

It remains unclear how much betacarotene Golden Rice has and the conditions it needs to express Vitamin A. Betacarotene requires fat to convert itself into Vitamin A.

In the 2009 informal feeding experiment in the US, cooked Golden Rice was served with butter, peeled cucumber, turkey meat, white bread, roasted cashews, among others, to healthy volunteers.

Back in 2001, Greenpeace claimed that a person had to consume 9 kilos of cooked Golden Rice to satisfy one’s daily need of Vitamin A.

During a seminar organized by the International Food Policy Research Institute in 2011, the promoters of Golden Rice claimed that 40 grams of Golden Rice can provide 40% of the estimated average Vitamin A requirement. 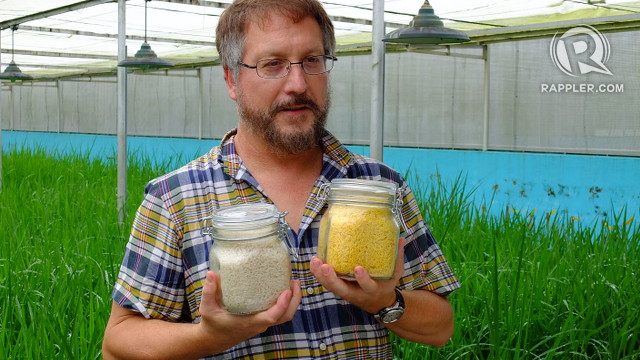 But the question is: Does the Philippines really need Golden Rice to address Vitamin A deficiency (VAD)?

This has been attributed to the Vitamin A supplementation programs, popularized during the time of former Sen Juan Flavier.

As of 2011, the Food and Nutrition Research Institute (FNRI) estimates that the coverage of the Vitamin A supplementation program has reached 91.6% of children.

Each capsule costs approximately P1 or a yearly cost of P43-P96. There are also multiple and accessible natural sources of Vitamin A and other equally important nutrients.

As one director of the Asian Vegetable Research Development Center said, 2 tablespoons of yellow sweet potatoes or half a cup of dark green leafy vegetables is enough to cover a pre-school child’s daily requirement of Vitamin A.

With the effective and sustainable solutions to VAD in sight and in the absence of a biosafety law and advanced risk-assessment approaches and infrastructure, the support for Golden Rice especially from the Department of Agriculture (DA) becomes telling.

The more than $100-million combined investment in the Golden Rice project appears to be informed by interests which are far less humanitarian.

There is basis for feminist Vandana Shiva to call Golden Rice a “Trojan horse” that will eventually mainstream genetically-engineered crops and food.

Lessons can be learned from Mexico whose native corn varieties were nearly wiped out due to contamination from genetically-engineered corn which was distributed as food aid.

Olivier de Shutter, the UN Special Rapporteur on the Right to Food, himself wrote the following words:

“The combination of natural gene flow and human seed exchange practices mean that it would be close to impossible to maintain the coexistence of native landraces of maize with transgenic maize being planted.”

Instead of quick-fixes, we need to look again at the more practical interventions which are grounded in our own contexts and histories. – Rappler.com

Nina Somera is a researcher with the Third World Network, an international network of organizations and individuals involved in development issues and the Third World.