The road to ASEAN 2015: Why are PH colleges lagging behind? 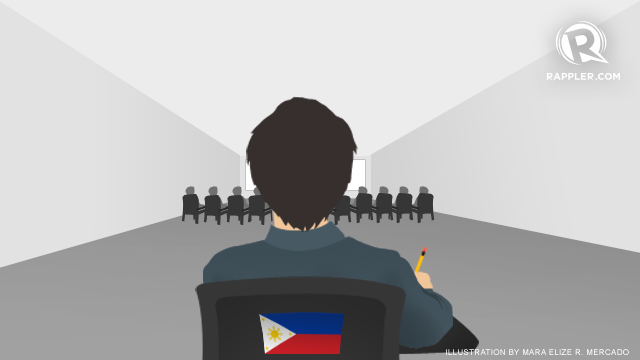 MANILA, Philippines – Island thinking. To each his own. Quite literally, our higher education institutions (HEIs) are taking competition too seriously that we’re moving at a snail’s pace toward internationalization.

At least this is what presidents of two of the top universities in the country think. This is why the impending ASEAN economic integration poses more fears – and overshadows possibilities – as 2015 closes in. (READ: Is PH ready for Asean 2015?)

“Quality assurance is very important for us to compete in the region,” University of the Philippines (UP) President Alfredo Pascual said in a conference Tuesday, November 19.

According to Pascual, the Philippines needs its government to heavily invest in higher education the way its neighboring countries do so more HEIs, especially public ones, will go for quality.

But in reality – and in the words of Commission on Higher Education (CHED) regional director Catherine Castañeda – “the private sector stirs higher education” in the country, and one private university is aware of that.

In the same conference, Ateneo de Manila University (AdMU) President Fr Jose Ramon Villarin noted that among ASEAN nations, the top 3 universities are always public universities. Except in the Philippines.

“I can just imagine if government can just fund education – public or private – I think we will go places,” Villarin said.

The lack of investment already makes the playing field uneven, and the challenge to internationalization is not helping.

“[There is a] resistance of sectors about going international because of the belief that as state universities and colleges, our obligation is to our country and the nation,” Pascual said.

Villarin agreed, saying the mindset of HEIs in the country contradicts the very nature of a university, which is to have broader horizons.

“Despite our proverbial openness to foreigners, we are still an archipelago. We are still divided into tribes – we see that not only in politics, but even in universities…This is the challenge: How do we move beyond our narrow interests?”

For the two presidents, collaboration among Philippine HEIs is key.

“We can redefine internationalization by making it more inclusive. Ang danger, yung mga malalakas, magagaling lang ang mauuna. (The danger is that only the strong, competitive ones will lead). Uneven playing field can be a hurtful thing. We will increase our prospect if we create strategic alliances among our universities,” Villarin said.

Rankings are slowly becoming important road signs towards internationalization, even if the two universities and CHED are wary of criteria. (READ: UP, AdMU, UST lose ground in world rankings)

“We’re not fully sold on rankings, but it’s something we cannot ignore. We’ll be ranked, and it will affect our reputation,” Pascual admitted. Villarin, for his part, said the criteria of these rankings do not reflect the university’s mandate as a whole.

Still, universities take their cue from these rankings, especially when it comes to research. For instance, both Pascual and Villarin saw how poorly the country is performing compared to other ASEAN countries in the creation of new knowledge.

“As a country, we only produce 600 papers while in Singapore, one university alone produces thousands,” Villarin said, noting that research papers produced by AdMU are not cited, meaning, “our work does not matter.”

Pascual agreed: “Look at our performance as a research country – very embarrassing, it’s a shame. [The] Philippines is at the very bottom.”

The challenge in research writing still goes back to the lack of support systems in HEIs.

“I’m a firm believer of economic incentives. [What’s the] reason [why faculty members are] not writing? The price is not right. But it does not mean we need to raise the amount. We need to reduce the hurdles. I think we need to provide our researchers some support,” he added.

This year’s topnotcher in the QS University Rankings for Asia is The Hong Kong University of Science and Technology. According to Pascual, it is a small university with only 3 colleges but has excelled as it focused on science and technology.

If Hong Kong can do it, it’s not impossible for the Philippines to achieve such feat.

“We need to focus [and] define our niche program, the competitive advantage of our regions, and focus on programs needed in our respective areas. This way we achieve excellence and become competitive,” Pascual said.

At this point, internationalization may seem a gargantuan task considering the country‘s 656 public HEIs and 1,643 private ones. But Villarin said looking at it not as an end in itself but a means to improvement might just do the trick.

“I would rather look at ASEAN integration as challenge, not a threat, to contribute to global conversation…We will discover what we need to improve…In the very process of regional involvement, we strengthen our love for country,” he said. – Rappler.com