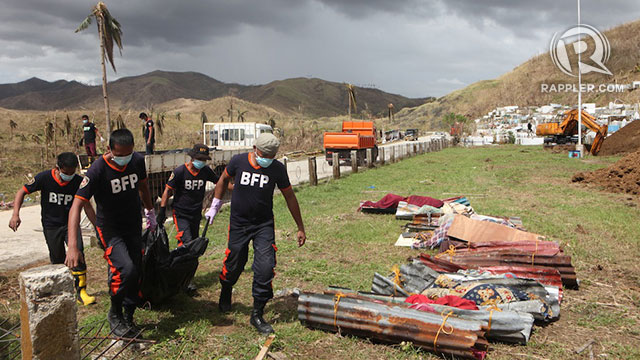 The number of casualties, which the government placed at 6,057 dead and 1,779 missing, is almost certain to rise, said Rey Gozon, civil defense director for the areas hardest-hit by the killer storm.

“For our region, we are still collecting bodies. We are getting an average 8 to 10 additional dead bodies every day,” he told Agence France-Presse.

He also expressed doubt that many of the missing would be found alive, saying so much time had passed since the storm struck with peak winds of 315 kilometers (195 miles) an hour on November 8, flattening whole towns mainly in the central islands of Samar and Leyte.

The latest official count puts Haiyan nearly on par with a 1976 tsunami in the southern Philippines, generated by a major undersea earthquake in the Moro Gulf, which left between 5,000 and 8,000 people dead.

The Haiyan toll has also already surpassed Tropical Storm Thelma, which unleashed floods that killed more than 5,100 people in the central city of Ormoc in 1991, previously the country’s deadliest storm.

The government said more than 4 million people lost their homes to either Haiyan’s winds or tsunami-like storm surges, and some would continue to need food aid as well as shelter and jobs. (READ: Aftermath of Yolanda (Typhoon Haiyan): What we know)

In a speech on Sunday, just after returning from a visit to Japan, Aquino said Japanese Prime Minister Shinzo Abe told him that Tokyo would be increasing its typhoon reconstruction standby loan to the Philippines from $100 million to $500 million.

This is on top of a $66 million grant already provided by Japan for immediate typhoon relief, he stressed.

“This visit showed what a good friend and ally the Japanese nation is,” said Aquino.

In Leyte which suffered the worst damage from the storm, 1,200 Japanese soldiers had provided relief aid including food, water and medical care, backed up by Japanese naval vessels.

The troops were warmly welcomed in an area which had been brutally occupied by Japanese forces during World War II. (READ: Japan sends Filipino-speaking aid workers to calamity areas)

Other multilateral and official aid agencies and private organizations have also been active in the storm-ravaged area where debris and garbage still litter the streets and the stench of death bodies lingers in the air.

On Sunday, members of the Taiwan-based Tzu Chi Foundation handed out financial aid to residents of the stricken city of Tacloban to be used in repairing their homes and rebuilding their lives.

Angeline Asoy, 31, a housewife with 6 children whose home was washed out by the storm, burst into tears when she received a blanket and P15,000 ($340) from the Buddhist charity group.

“We will use the money for materials to build a new house,” she said. – Rappler.com