Dec 22, 2014 1:39 PM PHT
Shakira Sison
Facebook Twitter Copy URL
Copied
Here are some effective responses to common inappropriate remarks that won't get you into a fight in your next holiday party

We’ve all been there – that obligatory family gathering where you see people at the end of the year. In one corner is that nosy aunt who is always up in your business, and in another is a tactless cousin who seems to feel she is the fashion police. Here are some effective responses to common inappropriate remarks that won’t get you into a fight in your next holiday party.

1.”Huy, ang taba mo na! (Hey, you’ve gotten fat!)” seems almost routine for many relatives to say as “Hello!” When greeted this way, or with any negative comment on your physical appearance, simply smile and say “Thank you! Life is good.” You may also turn it into a positive comment by saying, “Yes, I’m so lucky! I feel wonderful!” or “I’m definitely enjoying my life!” Take it a step further by making it a habit to tell them that they look great or that they’re glowing. Chances are they will beam all night and think of your compliment fondly, and maybe reflect on how they approached you. Or at the very least you might spread some positive vibes around.

2. “Kailan ka mag-aasawa? (When are you getting married?)” is the thoughtfully thoughtless question every year. Especially when directed at a woman, it implies that the woman is intentionally running away from marriage and commitment, or is undesirable. Although it’s offensive, many older relatives feel it’s their duty to make sure everyone around them is settled down. Since there are no real answers to this question, it’s wise to answer this with another question to turn the focus on them. Say, “I’m trying, Tita, but first tell me how great marriage is, so I’m convinced!” This is a great way to make them reflect on their own relationships and hopefully they’ll remember that marriage is not just the next step but life’s biggest commitment. Another way is to say, “Getting married is so expensive! Can you tell me how you and Tito were able to afford your (very loudly say) lavish wedding when you were younger? Did you have to borrow money?” Watch how quickly they change the subject! 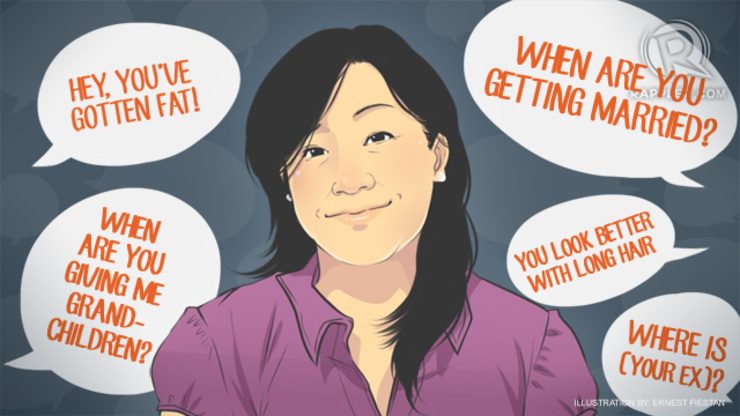 3. “When are you having kids?” is yet another milestone relatives enjoy interrogating us about. “Kailan mo ako bibigyan ng apo?” (When are you giving me grandchildren?) is common from parents who seem to feel that their job is not done until you’re married and have kids of your own. If you are trying to get pregnant, you may inject a bit of naughty humor and say, “We’re trying po! Nakakapagod na nga e!” (We’re trying! It’s getting exhausting!) and end up with laughs. Otherwise, just say you’re having fun right now and enjoying being child-free. Hopefully there will be enough screaming babies and crying children at your party to prove your point.

4. “Where is (your ex)?” The problem is that even if you do find someone, and it doesn’t work out, they’ll keep looking for him. Try “Oh he couldn’t be here tonight, where’s (their child who isn’t present or is overseas)?” That will turn the focus on the fact that some people just aren’t around and will spare you the need for an explanation. If they persist, the key in most of these interactions is confidence. Simply say, “Oh it didn’t work out, but I’m happy to be single!” They may argue about your being single, but they can’t argue with your happiness.

5. “Mas bagay sa’yo mahabang buhok (You look better with long hair).” Some folks just want to editorialize your appearance and fashion choices as a matter of small talk. This includes that relative who says your lipstick is the wrong shade or that you could use some foundation. “Thanks, I really like it this way,” is usually sufficient but if it’s not enough of a hint, just remember that many comments are simply a way for the speaker to get some air time. Indulge them. Ask for their secret formula on determining makeup shades or hairstyles. Have them spend 30 minutes speaking on the topic and hopefully they’ll realize that it’s way too much time to dwell on lipstick. If not, maybe they’ll get an appreciative audience in the crowd and you can simply inch yourself away.

Family gatherings are stressful, especially with all the opinions and (usually well-meaning) comments to deal with. It’s hard to win any conflict without hard feelings, so just focus on peace instead of victory. If all else fails, head for the food! Compliment the host on the food, praise his or her outfit, and applaud any performing child. Congratulate that braggart uncle who likes to announce how much money he made this year. People will stop by the buffet or food area and you can change any topic into some small talk about the edible offerings. Stay confident and bite your tongue. The evening will end soon, and your happy life will go on without comment afterwards.

Happy Holidays to you and your families! – Rappler.com

Shakira Andrea Sison is a Palanca Award-winning essayist. She currently works in finance and spends her non-working hours dodging rudeness in subway trains. She is a veterinarian by education and was managing a retail corporation in Manila before relocating to New York in 2002. Her column appears on Thursdays. Follow her on Twitter: @shakirasison and on Facebook.com/sisonshakira.