A Public Administration student at the University of the Philippines-Diliman, he recalls how as a Grade 3 pupil he and his classmates were subjected to their teacher’s verbal abuse. “Every day she cursed us. That’s how I learned to curse. Good thing, I don’t do that anymore.”

Everyone in his class, mostly 9-year-olds, had a bad experience with her. “One time, we were cleaning our classroom; she said we are not allowed to talk while we’re arranging the chairs. So I just mouthed what I wanted to say to my classmate. She saw me and asked me to come to her, and then she slapped me with her plastic slipper.”

He didn’t report the abuse. “I didn’t know that it was abuse at that time…We thought that it was just the norm inside the class. She was our teacher in all subjects, so we didn’t know how other Grade 3 teachers treated students.”

John Joshua, 15, experienced bullying from older students who threatened him and extorted money from him when he was in Grade 3. Redmon, also 15, experienced physical abuse from his elementary classmates who pulled his hair and teased him.

Even Education Secretary Armin Luistro said that when he was in kindergarten, an irate music teacher approached him when she saw him chatting with his classmates. His teacher put a scotch tape on his lips.

Luistro said that a simple act of abuse like this can negatively affect a child’s behavior. “It was an experience which, in the eyes of an adult, seems petty. But if you put yourselves in that situation, in the shoes of that student, the impact would be different,” he said.

According to a 2009 report of PLAN Philippines, a children’s organization, at least 5 out of 10 Filipino children in grades 1-3, 7 out of 10 in grades 4-6, and 6 out of 10 in high school have experienced some kind of violence in school.

It was discovered that violence – whether physical, verbal, or sexual – usually results in low self-esteem, fear, anger, and helplessness among children.

The most common forms of physical violence experienced by Filipino children are: PLAN stresses that physical punishment does not automatically equate to improved child discipline. On the contrary, it tends to make children more violent and aggressive as they grow up. In extreme cases, such punishments can even lead to serious physical injuries and death.

Physical punishments, it says, are linked to poor learning outcomes and higher dropout rates among students. It has found that children who are discriminated on the grounds of disability, class, ethnicity, and sexuality are more likely to suffer from such punishments.

Based on the same study, psychological and verbal abuse are the most common form of violence experienced by most Filipino students. These take the form of:

Based on the PLAN survey, over a third, or 35.5% of the interviewed elementary and high school students reported having been spoken to in a sexually offensive or suggestive manner by fellow students and teachers.

12.82% reported that they were touched inappropriately not only by their peers, but by teachers too who sexually harassed students.

PLAN found out that some students are victims of manipulation and exploitation done by either fellow students or teachers. They are forced to give objects or money, usually in the form of school contributions or payments for school projects. If unable to pay, they were either punished physically, ordered to leave the class, or disallowed from taking exams.

Such problems are mainly attributed to the lack of proper training and motivation among teachers. 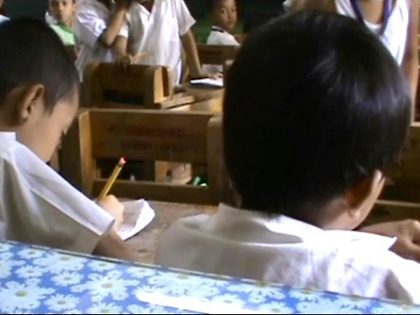 In a 2010 report, the World Health Organization says that approximately a fifth of women and 5-10% of men report being sexually abused as children. Such child maltreatment may cause lifelong physical and mental health predicaments.

In 2006 the United Nations published a report on violence against children. The report identified schools as one of the settings where children may be at most risk.

In the Philippines, around 500 to 800 cases of child abuse are annually committed by teachers, based on a study by the Child and Adolescent Psychiatrists of the Philippines Inc (CAPPI).

In 2006, CAPPI reported that half of the perpetrators in schools were teachers. A small percentage also included janitors, bus drivers, and other school personnel.

Despite obvious harmful effects, 89 countries still allow teachers to physically punish students in their care. This is known as corporal or physical punishment which involves the use of physical force that causes some degree of pain or discomfort.

In the Philippines, corporal punishment is prohibited, following the issuance in 1974 of the Child and Youth Welfare Code (Presidential Decree No. 63, Article 59). It prohibits any mental and physical violence against children.

Child abuse is punishable by Philippine law – the Special Protection of Children against Abuse, Exploitation, and Discrimination Act (RA 7610) of 1992 ensures the safety and welfare of the Filipino youth.

The 1987 Constitution also says that, “The State recognizes the vital role of the youth in nation building and shall promote and protect their physical, moral, spiritual, intellectual and social well-being.”

Despite the abundance of laws, child abuse still occurs in primary and secondary schools in the country. Some of these cases, if not most, also go unreported.

To address this, the Department of Education (DepEd) has released a comprehensive policy that will ensure the protection of students against bullying, abuse, exploitation and discrimination in schools.

Luistro and other officials signed on Thursday, May 3, the Child Protection Policy, which covers measures to prevent abuses against children in schools, and provides for processes to be followed when abuses are committed.

“The objective of the policy is to observe and promote zero tolerance on any act of child abuse, exploitation, violence, discrimination, bullying, and other forms of abuse in school,” Luistro said.

On the other hand, students involved in abusing another student would face counseling and other penalties.

Education Undersecretary Alberto Muyot said that the policy is a product of school officials’ negligence and inaction on various reports of abuses in schools.

To bridge this gap, the policy mandates the establishment of a Child Protection Committee (CPC) in all public and private elementary and secondary schools. CPC will be tasked to draft a code of conduct to ensure child protection and safety. This will be reviewed every 3 years.

DepEd is also obliged to develop a system for reporting, information education, monitoring the exercise of disciplinary action, and recommendation to address and prevent all forms of abuse.

Luistro urged the use of modules on positive and non-violent discipline in the classroom, along with anger and stress management and gender sensitivity for school personnel, students and teachers. This will hopefully help them understand and deal with child abuse.

John Joshua and Redmon, who attended the DepEd launch, see the program as a great help in eliminating abusive acts inside schools and lifting the spirits of students.

“Students like us will now feel safe. More children won’t be afraid to go to school anymore,” they said.

Jonathan has not heard from his Grade 3 teacher since. Some of his friends tell him that she now works in Cambodia, still as a teacher. – Rappler.com