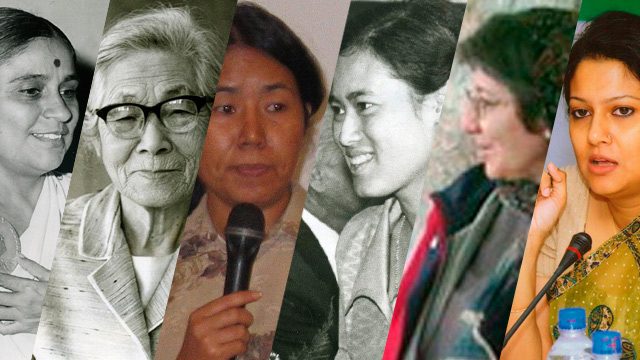 MANILA, Philippines – “Inspiring Change” – This is the theme of this year’s observance of the International Women’s Month.

To date, more than 60 women have received the Ramon Magsaysay Award. The first ever set of laureates included a woman, Mary H. Rutnam. In the years since then, female awardees—and scores of male Ramon Magsaysay Awardees, too—have been making their mark and inspiring positive change in their own spheres of influence. (READ: Women of substance and self-reliance)

From Afghanistan to Indonesia, China to East Timor, the inhospitable peaks of Nepal to the remote islands of the Philippines, the ladies of the Ramon Magsaysay Award community have been working to address various societal issues in order to benefit others. They have been developing and implementing transformative solutions in inclusive education and cultural development, sustainable development and food security, social enterprise and rural livelihood, universal and affordable healthcare, ethical governance and engaged citizenship, and social justice and peace building issues.

The serendipitous timing of the women’s month theme coinciding with the award’s milestone anniversary brings to focus the many and varied transformations that female Ramon Magsaysay laureates have brought about in Asia.

These ladies are shining examples of what an empowered woman is – someone who inspires tremendous change in society. Working in regional issues, these female recipients of the Ramon Magsaysay Award are just some of the ladies inspiring change in Asia.

Princess Maha Chakri Sirindhorn (Public Service ’91, Thailand)is part of Thailand’s royal family, with a lineage unbroken for several generations.  As a princess, she could have spent her life living glamorously in the lap of luxury. Instead, she chose to use her name and influence to help preserve and reinvigorate Thailand’s culture.

Following her king-father’s lifestyle of simplicity, and commitment to the Thai citizens, she encouraged lively apprenticeship in traditional craftsmen, performed traditional musical instruments, and acted as ambassador for traditional Thai music during her many international travels. Also an academician and history professor, Princess Sirindhorn also works to care for children—especially the orphans and refugees. Through her efforts, special schools for deaf and blind children have spread throughout Thailand. Even more children benefit from her education projects, in which students’ self-reliance and health are highlighted alongside academic learning. Syeda Rizwana Hasan (’12, Bangladesh) was born to a family of privilege. She was reared in a tradition of public service. Thus, it was no surprise when she eventually became a lawyer and promptly decided to join the Bangladesh Environmental Lawyers Association (BELA).

When BELA founder, the highly-respected activist-lawyer Mohiuddin Farooque, died, she became the executive director of the pioneering public interest litigation organization. She led the organization in high-profile cases involving pollution, forest rights, hill cutting, illegal fishing, and waste dumping. Under her leadership, BELA secured two landmark rulings from the Bangladeshi courts—the first case in which a polluter was fined and another in which a large-scale business operation was ordered close for operating without environmental clearance.

Hasan led a campaign for judicial activism that generated wide public support for the cause of environmental justice. She expanded BELA’s operations, continuing to spark awareness among her fellowmen that the “right to environment” is an extension of the constitutionally-protected “right to life.” Ela Ramesh Bhatt (Community Leadership ‘77, India) was a young socially-minded lawyer who joined the Textile Labor Association (TLA) in the 1950s. By the late 1960s, she became the head of TLA’s Women’s Wing, where she protected workers’ rights, organized projects and improved the organization. She also became increasingly bothered by the plight of self-employed women workers, usually the wives and kinswomen of TLA members. They were unorganized, economically weak, lacking resources, and without protection of the social security.

To assist the women, Bhatt established the Self-Employed Women’s Association (SEWA). Through SEWA, Bhatt encouraged women to protect each other’s rights and to defend themselves from tyranny of employers or unjust laws.  She also led the women in establishing the SEWA Cooperative Bank, which freed the women from usurious loans and allowed them to finance other projects such as literacy programs, day care centers for their children, health programs, livelihood training, and modernization of business equipment. To this day, SEWA remains the largest association of its kind in India, continuing to uplift the lives of its women members and their families. Sima Samar (Community Leadership ‘94, Pakistan) grew up aware that she was doubly oppressed as a Hazara woman in a conservative Pashtun-dominated Muslim society. This made her strive hard to prove her worth and eventually became a doctor. When her husband was arrested, never to return, Samar took her son, joined other Afghan refugees, and fled to Pakistan.

There, she saw the hardships of her countrymen, especially the women who were forbidden to consult male doctors. She sought to relieve their misery by establishing a hospital for women, and then a clinic for both males and females. She offered affordable medical services, delivering babies, performing surgeries, and operating a testing laboratory. Challenging societal conventions, she also established a school for girls. Samar led a group of educated refugee women in combatting illiteracy and teaching practical skills to refugee Afghan girls. Her work in providing healthcare and education continues to this day, inspiring support from the international community for the many victims of the wars in Afghanistan. Fusaye Ichikawa (Peace & International Understanding ‘74, Japan) lived in traditional, postwar Japan, where she grew up aware of how women are not treated equally to men. Despite this, Ichikawa’s father sent her to primary school and, with the help of her brother, she got higher education. She subsequently became a schoolteacher, a journalist, a clerk, a labor union worker, and a member of the House of Councilors.

She established the New Women’s Association, which pushed for the amendment of the law prohibiting women from participating in any political speech. She also won for women prohibition against nighttime shifts and working in mines. After Japan’s surrender in World War II, she headed the League of Women Voters, successfully campaigning against licensed prostitution. Before her death in 1981, Ichikawa was able to raise women’s social and political stature and to establish recognition for women’s rights in Japan. Oung Chanthol (Emergent Leader ‘01, Cambodia) was born during the Khmer Rouge regime in Cambodia. As a young girl, she lost her father and she spent part of her youth in a Thai refugee camp, where she was able to study law and public administration. Eventually, she was able to join a human rights task force under the United Nations. There, she saw firsthand the huge problem of sex trafficking and prostitution in the country, most victims being young girls and women. Many others are victims of rape and domestic violence. (READ: Human trafficking a worry post-Yolanda)

To help these women, she set up the Cambodian Women’s Crisis Center (CWCC) shelters in various secret locations. Here, women can find succor from abusive husbands or fathers, shelter from prostitution and sex trafficking. The center also provided care and rehabilitation for the women. At the same time, Oung also went after the perpetrators of violence against women in Cambodia by mounting awareness campaigns and connecting to police, government authorities, and journalists. Today, she continues to garner support for the work of CWCC, seek justice for the women, and advocate for the complete elimination of sex trafficking. These six Magsaysay laureates are all women of service. They did not just fight for their own personal rights, but have reached out to assist other women—and men, too—in ways that are most needed. Simply by their greatness of spirit and transformative solutions, they transcended the usual definition of a mother by being responsible for their fellow human beings. – Rappler.com

Angeli Alba is the Communications Officer at the Ramon Magsaysay Award Foundation, the organization that bestows Asia’s premier prize–the Ramon Magsaysay Award to honor “greatness of spirit and transformative leadership in Asia.” She organizes GOS Kapihan Sessions and manages social media platforms for the Foundation, then volunteers for teacher-training projects, builds networks, reads, and blogs in her spare time.