Honoring the heroes of Haiyan MANILA, Philippines – More than five months have passed since the Philippines experienced the world’s worst typhoon in history. Super Typhoon Haiyan (Yolanda) left the country bowed but not beaten.

As we celebrate Heroes’ Day or Araw ng Kagitingan on April 9, MovePH pays tribute to some of the unsung heroes of Haiyan. These individuals and organizations went beyond what was expected of them to help others pick up the pieces and move on.

Dejarlo, an electrician from Tacloban, experienced the worst of Haiyan just like any resident of the ill-fated city. Yet, amidst the grey rubble and depression, he found a silver lining. Using damaged ceiling fans and discarded bike parts, he was able to charge cellphones and flashlights for his fellow survivors. He even encouraged others to copy his innovative device. (READ: Filipino ingenuity at work in Yolanda aftermath)

When powerful storm surges caused by Typhoon Yolanda (Haiyan) engulfed his barangay in Tacloban City, Dela Cruz and his two sons managed to save 10 families from sure death.  Dela Cruz, a non-uniformmed employee of the Philippine National Police, tied clothes together to form a life line and save 36 people. (READ: PNP employee awarded for saving 10 families during Yolanda) AG was visiting a friend in Tacloban when Typhoon Yolanda left him and thousands others homeless and cut off for more than two days. Stuck and with nowhere to turn to for refuge, AG did the next best thing he could do: help others. He volunteered with a group of firemen collecting bodies strewn along the street for several days before he finally found a way back home to Manila. (READ: AG Saño, the man who helped bury the dead)

When communication lines were down and people were getting desperate for information, a group of volunteers quickly provided a different kind of lifeline. First Response Radio was set up just 3 days after Haiyan struck. The makeshift radio station provided valuable information and offered words of encouragement to survivors. Most of all, they conveyed a message of hope and perserverance. (READ: ‘Radio from Tacloban, for Tacloban’) 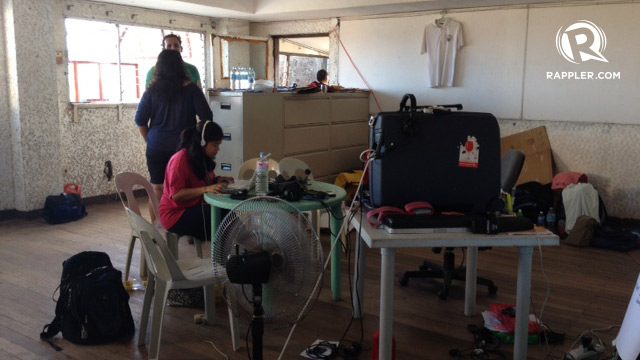 Fisherfolk suffered heavily from the destruction caused by Haiyan. Their boats, the only means of livelihood, were either washed away or damaged by the typhoon. Thankfully, organizations and companies like BP Technologies used its know-how to build fiberglass boats for the affected communities. The company was able to produce at least 1,400 fiberglass boats and plans on producing more. (READ: Fiberglass boats for Haiyan-hit fishermen)

Super Typhoon Yolanda was a nightmare for the business sector in Tacloban City. Traumatized by the disaster and terrified by the lawlessness that followed, almost 80% of the local businessmen left the city the first few days after the disaster.
(WATCH: After Yolanda: The barber of Guiuan)

But Kenneth Uy stayed, seeing opportunity not only to do business but also to help the survivors who were left behind. (READ: Tacloban trader back in business) Before Baltazar emigrated to Australia, she grew up in Tacloban, Leyte. As soon as she found out about how Typhoon Yolanda destroyed her childhood home, she and her fellow volunteers went from storefronts to train stations in Sydney to ask for help. They were able to raise AUD 10,000 which was used to provide medical relief for affected communities in Northern Cebu and Leyte. Her successful online and offline fundraising efforts continue to this day.

Light in the dark

In the darkest hours of Haiyan’s aftermath, these individuals brought light to those who needed it most.

There are just some of the #HeroesofHaiyan. Many more remain anonymous. Let us honor these everyday unsung heroes by telling their stories and sharing them with others.

If you have a story to tell about a hero of Haiyan, share them with us via the comments section below, on Twitter or Facebook and via email to move.ph@rappler.com. Send in your photos and videos as well.

Let each story challenge us to action towards building sustainable and resilient communities.  – Rappler.com

For more inspiring stories, read about other #HeroesofHaiyan here.